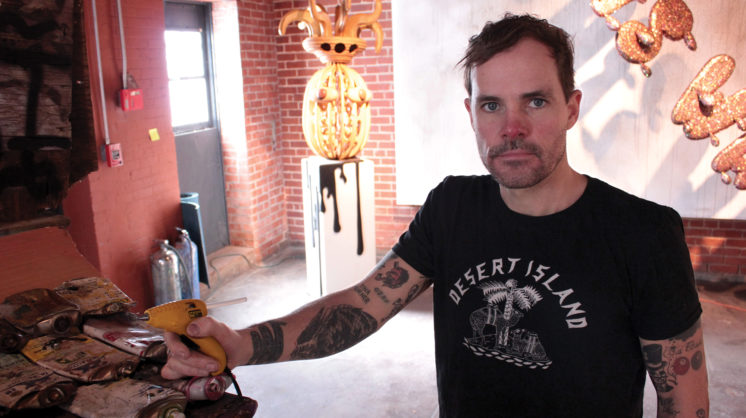 Artist Andrew H. Shirley has chosen OKC as the site to premiere his critically acclaimed Wastedland 2 in the central U.S.

The rear gallery of Individual Artists of Oklahoma will be showing the film and displaying sculptures from the show in its latest exhibition opening Friday, 17 February.

Praised by the Huffington Post and Mass Appeal, the surreal journey takes viewers to an existential fantasyland where graffiti and spirit animals rule a post-apocalyptic world.

The New York-based artist partnered with several graffiti artists from New York to create the characters’ distinctive costumes and appearance.

Exploring questions surrounding fate and self through wordplay, sculpture, paintings and artifacts, Shirley’s show includes some of the sculptures from the film.

The Detroit-born multi-disciplinary artist has an obsession with living experimentation; his works have appeared in Long Island City’s MoMA’s PS1 gallery and Vogue and his films have secured worldwide screenings in hundreds of cities.

For a glimpse of the film before the premiere, go to wastedland2.com.

And if that wasn’t enough ground-breaking art, also opening at the gallery on Friday is “Lady Parts” by local artist Nicole Emmons-Willis, discussing reproductive rights for women.

The exhibition will feature a video installation and a large inflatable reproductive system.