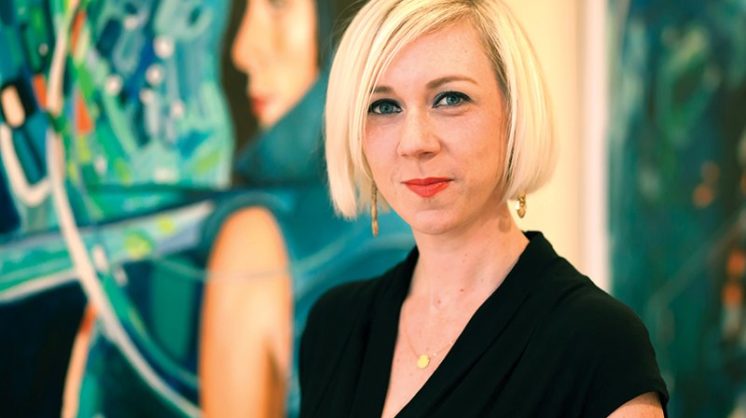 “Are you crazy?” That was Erin Cooper’s response when a group of Western Avenue leaders urged her to design and lead two other artists to create a mural 120 feet wide and 19 feet high. And it wasn’t in a secluded spot that only a few people would see. Thousands would, daily.

That strong response was because when they asked in early 2014, she had only begun the transition from abstract to figurative art.

“I had never even considered doing a mural before that,” she says. She was just starting to experiment with painting faces and the human figure.

But being a creative person who values change and challenge in her art, Cooper agreed.

Muralist The team did it. Cooper, Amanda Bradway and Lauren Miller completed the mural in October 2014. Now the public can enjoy “Oklahoma Aiukli” at NW 37th Street and Western Avenue in OKC.

The mural’s title comes from the model they used: the 13-year-old Choctaw woman Bella Aiukli, whose name means “beauty” in the Choctaw language. She is active in her tribe and a positive role model for others.

Cooper created the mural to incorporate visitors standing “in” the hands of Aiukli, and has been surprised by reactions to that feature.

“It’s really funny,” she says. “People tag me all the time in new photos of them interacting with that mural and the one over in the Plaza District Alley.”

That solo effort, “Our Crowns Are Bought and Paid For,” was completed in November 2015. Like the one on Western, the Plaza District mural was painted to allow interactions – a woman holds a crown at just the right height for most to pose as though it’s being placed on their heads.

It’s part of a project called Plaza Walls, in which an alley behind the storefronts between N Indiana and N Gatewood avenues on 16th Street has been transformed into entryways for new shops and businesses. The extensive mural art there has made the alley an inviting space instead of the forbidding maze of dumpsters that it was before.

“The initial idea was about recognizing your self-worth, and acknowledging the struggles of the people who fought to make our lives better,” Cooper says.

Visual Artist Cooper’s training started with extensive schooling in the Air Force, where she learned many types of design. When she started experimenting with canvas visual art, it was more abstract and illustrative.

Making the shift from abstract to figurative art (that studies the human body) has been a significant recent development. It has meant one big, new start with murals, and now another start with small canvas pieces.

She just completed her first canvas figurative show at The Project Box in OKC’s Paseo District in March. “I just love her art,” says owner Lisa Jean Allswede. She approached Cooper about the show, and described herself as excited to have her there.

One gallery visitor that night was Vanessa McIntire, an art teacher from Mustang High School, who brought her students and eagerly pointed out the strong points of Cooper’s paintings. “It’s really nice,” McIntire says. “If I had the money, I would buy it.”

What’s Next? Currently completing several more large-scale public murals, Cooper says, “Public art is my big focus and interest.” She is working “to be better and faster and create more beautiful large-scale work.”

Where to find Erin Cooper murals

“Our Crowns Are Bought and Paid For”
Plaza Alley, OKC, behind storefronts just north of NW 16th Street between N Indiana and N Gatewood avenues

To learn about new projects and shows, visit ecooperstudio.com.