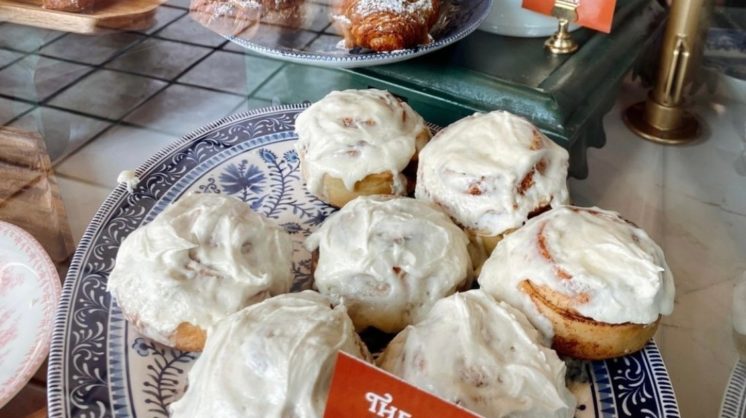 Perhaps we can be forgiven for walking into the cinnamon rolls war unaware. People are very serious about their preferences for this baked good, and while we thought it was a simple matter of saying “go try these excellent options,” it turns out that the cinnamon rolls you were raised on might determine what you think is a proper, or the only acceptable, version. As with all things food, there are both purists and the adventurous, so we thought it best to offer options for both eaters. Because I was raised on Pillsbury—orange is still the best—a thin glaze is proper to me, but I acknowledge that some prefer a dense layer of frosting, or even allowing the cinnamon and brown sugar to do their own heavy lifting. For all three camps, here are 10 cinnamon rolls you need to try now.

Frida – It feeds 4-6, but you can certainly take some home, so don’t let the size (about five dinner plates stacked) put you off. The combination of ancho chile and orange might trick your brain into thinking it’s lighter than it is, but that just means you can eat more. (500 Paseo, OKC)

The Hutch – A very traditional approach, but done extraordinarily well. What makes it so good? It’s a cinnamon roll that reminds you why you’ve always loved cinnamon rolls. Beyond that, it’s some kind of weird magic. (6437 Avondale, OKC)

Harvey Bakery – The eponymous Harvey Cinnamon Roll is another traditional entry, and it manages to be an excellent combination of perfect pastry with abundant frosting that is just the right level of sweet. (301 NW 13th, OKC)

Quincy Bake Shop – Another frosted entry, this one with a cream cheese base and courtesy Chef Trisha O’Donoghue. The bake shop inside Bradford House has cinnamon rolls every day, and you will definitely be fighting over the gooey, delicious center. (1235 NW 38th, OKC)

Big Sky Bread Company – The first “nude” entry in the list; Big Sky lets the cinnamon and caramelized brown sugar do the work. It’s also whole wheat, and I believe that means it’s good for you. (6606 N Western, OKC)

Whipped Bakery Cafe – Need a reason to head west? Whipped not only has the only runzas we know of in OKC, it also has an old-school cinnamon roll with icing that runs all over the still-warm pastry, making for first-to-last-bite perfection. (3820 N MacArthur, Warr Acres)

Sunshine Baking Company – This southside bakery nails the soft and gooey style, so the middle turns into a delectable blend of pastry and candied confection. (7705 S Walker, OKC)

Cafe Evoke – The downtown Edmond coffee shop/cafe makes a very limited number of fresh cinnamon rolls on weekends only. They’re topped with a glaze-frosting hybrid in the perfect proportion not to weigh down the pastry. (103 S Broadway, Edmond)

Ganache Pâtisserie – Everything this husband-wife chef team produces is beautiful and delicious. The cinnamon rolls are very traditional—much as you’d expect from classically trained chefs—and the only problem is leaving with only the cinnamon rolls. (13230 Pawnee, OKC)

Tower Cafe – I can still remember the excitement at my old west-side office when the plastic-wrapped round foil pan from Okarche showed up in the break room of a morning. The cinnamon rolls are packed in and almost soaking in icing, and again, explaining what makes them so good would require a conversation about magic. (411 S Main, Okarche)