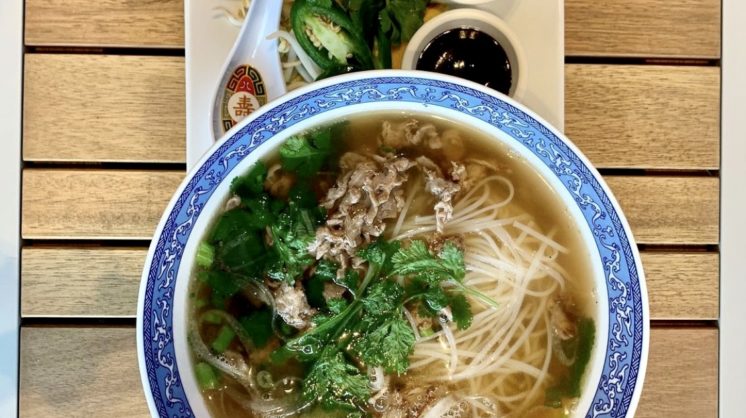 Pho has a rich history in spite of its place as a street food in Vietnamese cuisine. More than a noodle soup, pho is bound up with the history of colonialism and imperialism in Southeast Asia. As cookbook author Andrea Nguyen wrote for NPR: “French colonials in Vietnam ordered the slaughtering of cows for the steaks they craved. The bones and tough cuts were left to local cooks, who were used to cows as draft animals but soon found a way to turn the leftovers into delicious broth with rice noodles and thinly sliced meat. It was sold as affordable street food that vendors customized for each diner.”

For Oklahomans, pho is now a staple of our diets. The Vietnamese community became an integral part of the Oklahoma community almost 50 years ago, so multiple generations of Okies have grown up with pho as part of their culinary habits. In fact, adventurous eaters from all walks of life have their favorite pho joint — us too — so we thought we’d highlight 10 pho joints you should try — even if you already have a favorite.

Pho Cuong. Since non-Vietnamese speakers struggle with that last part, it’s mostly known as “the green house.” The Asian District spot has been a favorite for years, and the menu includes some more adventurous options for those inclined to wander further afield.

Pho’Ever. You know a dish has hit the mainstream when you can find it anywhere in a city, and this NW Expressway spot is a welcome local restaurant addition to the Expressway’s hit-or-miss dining options.

Pho Lien Hoa. OKC food writer extraordinaire Dave Cathey refers to the Uptown 23rd location as “the mothership” for pho in OKC. There were pho joints before, yes, but this is the one that’s carried the torch the longest now, and you can find them up on the far north side now too at NW 132nd and Penn.

Pho OKC. This southside spot has an extensive menu including boba tea and fresh fruit smoothies, but pho has been their specialty for years.

Pho Winner. The pho at this Norman shop is a favorite with locals, and some refer to it as a “cure-all” — likely for hangovers. Can’t speak to the medicinal efficacy, but it is delicious.

Riviere Modern Banh Mi. This Midtown banh mi spot is really a modern Vietnamese restaurant with good food in multiple locations. They also make what may be the city’s last small batch pho. And, yes, get the meatballs while you wait for your bowl of soup.

VII Asian Bistro. A hotspot in the Asian District, this full-service restaurant has lunch specials, a wide-ranging menu and delicious pho.

Pho Lan. A favorite of Moore diners, this Asian bistro features excellent pho, as well as boba tea and Vietnamese coffee. For a twist on traditional pho, try the pork broth.