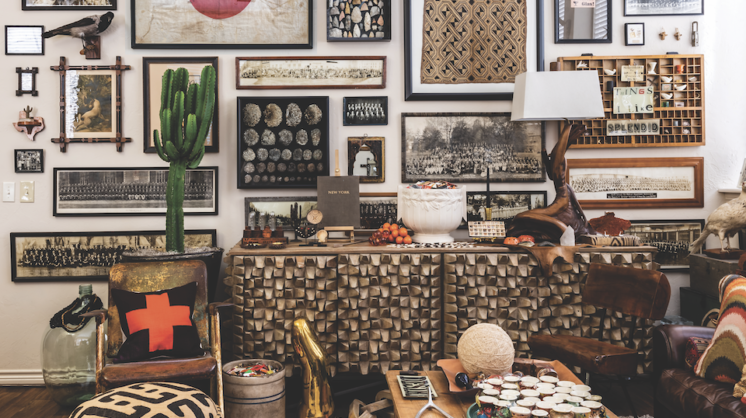 Less is more. We’ve all heard that old saw, first popularized by minimalist architect Ludwig Mies van der Rohe and spouted today by the diabolical Maire Kondo and her ilk. Minimalism, for the past decade or so, had staged a stark takeover of the interior design world, holding it firmly hostage in a pale gray room devoid of draperies, crown molding or coziness. For years the movement’s popularity seemed to know no bounds, but sure enough, a jubilant rebellion is brewing, and not a moment too soon.

Of course pockets of rebellious maximalism have held steady during this bleak period, reveling in piles of toss pillows scattered across sofas upholstered in redolent pattern mixes. Daniel Mathis, whose home is a feast for the senses, thankfully never gave minimalism more than a passing glance, though he did tap the brakes, as far as collecting goes, during law school at Ole Miss.

“I dabbled in minimalism years ago,” Mathis says. “I appreciate it, but for me it was a constant fight, so I gave in. You have to just give in and do your thing.”

Mathis’s thing is exuberant collections of beautifully-curated flea market and antique shop finds. Collections. His downtown Oklahoma City apartment, in the historic Montgomery building, is a treasure trove. It’s been featured in national magazines, and is an ever-evolving work of art.

“I think I got the collecting gene from my Gram, my mother’s mother, Billie Grisham,” Mathis says. “She’s 88. We’d go to garage sales, antique shops and vintage stores, and she’d say ‘well, if they’re just giving it away…’”

He’s pretty confident that the urge to collect and curate is genetic, and he may be right. “My first collection was key rings, and rocks. This was in second grade. With my rock collection, I kept them on some shelves in my closet, because that’s where I was allowed to have them. That’s where my love of taking lots of small things which on their own are mundane and grouping them together to make a statement.”

This technique of his, this excellent eye for the large-scale assemblage, that makes his apartment a work of art. Its high ceilings only make his canvas larger, allowing his creativity to soar. It’s a far cry from his day job. Mathis is an oil and gas attorney for a large energy company downtown. “I don’t have any design training, but it’s my creative outlet. My fun. My job is very demanding and I am a right-brained person, so I need this.”

Without his ability to edit and group, his collections would overwhelm the eye. “You have to create groupings of like items. If my pottery was spread around the apartment, you wouldn’t know where to look,” he says. “I like balance, not symmetry. I try to create balance in my displays, in the rooms and throughout the whole apartment.”