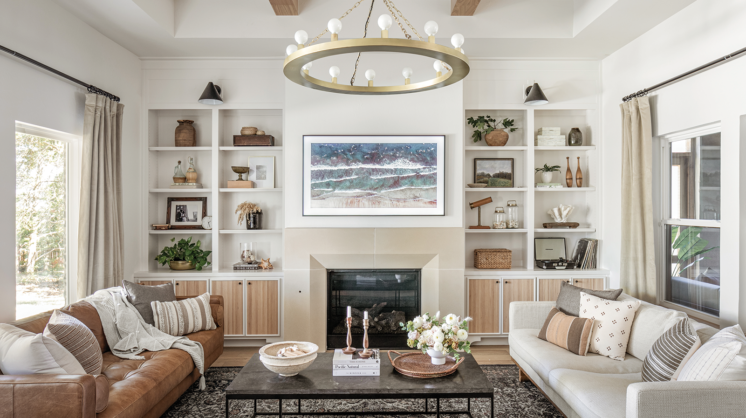 Married to a homebuilder, Kelsey McGregor often hears from people that it is their dream to own a home built by McGregor Homes. For a long time, her reply was “Mine, too.”

That reply changed three years ago, when she and her husband, Scott, worked on their dream home in north Edmond together — he as the homebuilder and she as the designer through her full-service interior design firm, Kelsey Leigh Design Co.

They even sketched out their kitchen plans on a napkin over a dinner date in a booth at an Oklahoma City restaurant, Kelsey said.

“I just had to get it out of my head,” she said. “We had a napkin there and a pen and I kind of just sketched out what the millwork would look like, and it’s pretty much exactly what you see there.”

Kelsey said in her kitchen she was going for what her design firm calls the “magic moment,” when you walk in and you see only balance and beauty. The appliances are somewhat disguised to the side and not front and center; instead, the focus is on the creatively designed, symmetrical cabinetry that goes from ceiling all the way to the countertop, the Calcutta Oro marble used as a backsplash, the white oak accents and more. The same white oak wood that peeks through the glass in the cabinets, stained in Sherwin Williams’ Pickled Oak color, is used on the kitchen island and throughout the house.

Kelsey also loves the spice and utensil pullouts next to the GE Café oven and gas range with its white matte finish and gold knobs. The double oven, which initially she thought a compromise for space-saving reasons, has turned out to be one of her favorites; she can still cook everything she wants to in it, including a turkey.

“Everything was very intentional, both in the form and function of the kitchen,” she said. “We wanted to make sure that there was a spot for everything and everyone, and everything had a spot.”

The McGregors’ entire four-bedroom, 3.5-bathroom home has turned into one that the couple loves for themselves and their four children: Mycah, 11; Holly, 9; Behr, 7; and Ruby, 5. The Magnolia Network came to Oklahoma City earlier this year to film three of its rooms — the master bathroom, the home office and their children’s bunk room — to feature on its new “Rooms We Love” show hosted by the Discovery Plus channel.

Kelsey describes their home as “modern traditional,” with a lot of organic and textural accents throughout. She said she could also fit their home’s style into a “California casual” category, since her husband grew up in California and she moved there from Denver for college at Azusa Pacific University, where the two of them met. They moved to Oklahoma after Scott’s parents did around 2008.

“We have our roots in traditional, but we like it fresh, with modern elements,” she said.

Kelsey’s interest in design has been lifelong — from a very young age, she took great interest in decorating her rooms and arranging them just so. She didn’t think about doing it professionally until she started helping her husband in that capacity with the spec homes he was showing to potential buyers. McGregor Homes started winning awards for that work, such as from Parade of Homes for design, best interior, etc., and Kelsey McGregor realized she could get deeper into such work on a larger scale.

She launched Kelsey Leigh Design Co. around 2018-2019, about the same time she and Scott started working on their own home together.

“This was my full chance to kind of really unleash all of my ideas and creativity,” said Kelsey, adding that the more she shared about their home’s progress on social media, the more attention it received. “It’s been a really big pattern of growth for the firm.”

Today, the design company, or “KLD” as Kelsey refers to it, employs 10 women who are all passionate both about design and quality and about spending time with their families, in a “mom-friendly work environment.”

The company’s tag line is “a million decisions, simplified, beautified” because its goal is to help people narrow down all the overwhelming choices to the right ones for their homes, Kelsey said. Hallmark values of the company include being approachable, both in terms of aesthetics and as people; family; efficiency; and beauty.

Soon Kelsey Leigh Design will be opening an e-commerce store, called the KLD Home Shop, with future plans to build new headquarters with a retail section in Edmond. The store will carry some lighting, bedding, rugs, furniture and more.

Kelsey joked that couples working on homes together is “job security for therapists,” as there were “arguments, passionate talking” — but she loves the home they designed for their family. “He was very gracious, but we both had veto power.”

Scott McGregor wondered at first what it would be like working together with his wife since he builds homes for a living.

“To my surprise, there were minimal disagreements,” he said. “I enjoyed the fact that we both have similar taste, as it made the selection process way easier.”

For both, the home turned out beautiful and livable, with “magic moments” throughout.