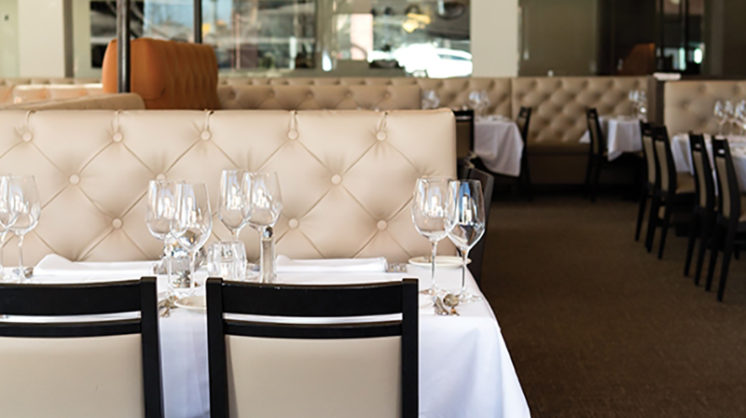 As Rewarding As It can Be To Watch A City Grow And Expand (something with which we in this sprawling metropolis are pleasantly familiar), There’s Even More Satisfaction In Seeing Vitality And Verve Return To An Area Within The Civic Boundaries That Had Fallen Into Disuse.

That’s one of the reasons it’s such a pleasure to see the blue neon “Buick” sign relit atop its namesake building in Automobile Alley … but only the beginning of why a trip to that corner of 10th and Broadway can be a terrific idea. Because in addition to decades of history, the building now houses Broadway 10 Bar & Chophouse.

There’s an extent to which a restaurant of any genre – perhaps especially a steakhouse like this – has to work to differentiate itself; either in execution of the classics (diners know before they walk in the door that they’ll be able to order a filet mignon, but not all places can dish up an equivalent version) or in inspirational flourishes (sure, there’s a NY Strip, but what else might be in the offing?) Broadway 10 manages both, and does so in an environment that deserves its own accolades.

The space is enormous – something on the order of 8,000 square feet of floor space – and the east and south walls are almost entirely omposed of windows, the better to allow street views of passing traffic and pedestrians. And yet, despite having no interior walls to divvy up this immense room, the individual tables still feel personal. There are a couple of TVs, but only in the bar area, and the design overall does a nice job of breaking up the open space using booth backs of different heights and giant floor lamps to create a partial canopy effect. It’s simultaneously expansive and comfortable, bustling with energy while still allowing for casual conversation – and concentration on food.

I’d recommend starting with the Butcher Meatballs, but only if you’re hungry; they’re enormous. Loosely packed and savory with a rich ragu and shavings of parmesan, they’re practically a main dish in their own right. If you’re looking for something a little less massive, one of Broadway 10’s unusual touches is a sushi menu: the house specialty Buick roll is a choice combination of crab salad, cream cheese, asparagus and jalapeno, each piece topped with a single shrimp in a thoroughly magnificent sweet garlic sauce. Seriously: amazing.

The kitchen says its fires are pecan and hickory, and either I’m highly suggestible or you can actually get a savory hint of the woodsmoke off the steak. Not enough to be distracting or interfere with the rich Béarnaise, but sufficient to add a little extra resonance to that 8-oz filet mignon. The gorgonzola macaroni and cheese is very good but with an insistent, tangy taste, so you might try another side like the Pommes Anna (a pie-shaped wedge of thinly sliced potatoes layered and cooked in plenty of butter) if your entrée of choice has a more delicate flavor profile. Speaking of which, my organic salmon filet was a beautifully cooked piece of fish, firm but not too dry with a hint of char here and there, and dosed with a spicy Southwestern remoulade.A closer like the luscious vanilla bean crème brulee is an ideal way to finish; think of it as the icing on the cake.

From broad strokes like the interior’s simple color scheme leavened with earth tones to neat smaller details like the silver globe of drink sweeteners and the crossed-cleaver sigil used as a decorative element, Broadway 10 is a well-executed treat.