Burgers and Beyond at Nic’s Place - 405 Magazine 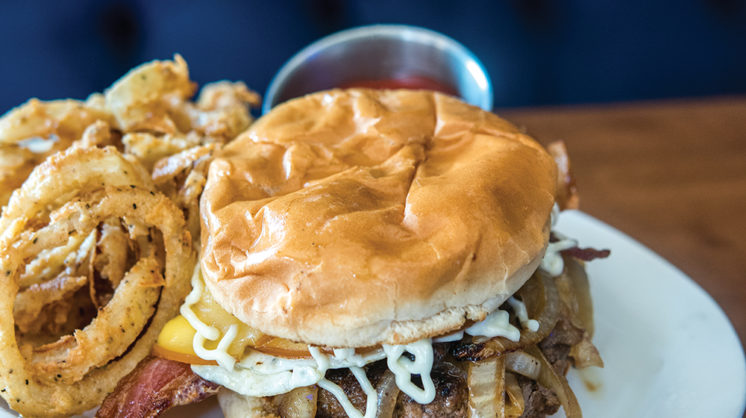 I sincerely hope that this isn’t the first time you’ve ever heard of Nic’s Grill – it’s fairly universally acknowledged among the cognoscenti that Justin Nicholas makes the very best burger OKC has to offer, and the fact of that consensus is a feat in itself. It’s an automatic recommendation: If you haven’t squeezed your way into the tiny café on Penn, I beg you to, and soon – as soon as you’re ready to discover genuine burger bliss.

But, joy that it is, Nic’s Grill comes with a few drawbacks; one or two flies in the ointment. First of all, it’s tiny for reals, no more than 17 seats, so there’s not much space to stretch your legs and often a line out the door. It’s cash-only, which can be a mild inconvenience if you haven’t planned for it. Most of all, it’s only open four hours a day, and only on weekdays – so if you can’t make room for it in your lunch hour, you can’t make it at all. That’s one of the main reasons why it’s such a pleasure to visit his Midtown spinoff/sequel, the full-service lunch and dinner (and weekend breakfast) restaurant Nic’s Place.

The main surprise for those familiar with the original who haven’t seen the new space yet will be the atmosphere – I still can’t get over how nice it is in here. I got semi-regular updates on the buildout process during visits to Nic’s Grill, so I had some idea of how ambitious his plans were, and how long it was taking, and what pains Nic and his team were taking with their Midtown baby – but the finished results are still startling. The dark wood molding and trim, the deep, plush chairs, the gleaming textured leather of the booths, the thick slabs of marble that serve as family-style tabletops in the main dining room … everything feels solid and stylish, verging on opulence while still feeling perfectly comfortable. That’s an important consideration considering the menu, which prominently features immense (and not always particularly tidy) burgers such as the one that made Nic locally famous. And by the way, those two marble-topped tables surrounded by high stools seat as many people as the entire operation on Penn.

As classy as the surroundings are, the menu remains steadfastly focused on, in its words, “diner comfort food.” That naturally begins with the appetizers, and I’m delighted that we took a chance on the fried pickles; dipped in buttermilk, lightly breaded and crisped, there are no secret ingredients other than what adds up to zesty, crunchy deliciousness. Likewise, the nachos aren’t intended to surprise, just deliver immense helpings of tasty, tender chicken bites, cheese, guacamole and sour cream into your waiting face. Spoiler: They succeed. 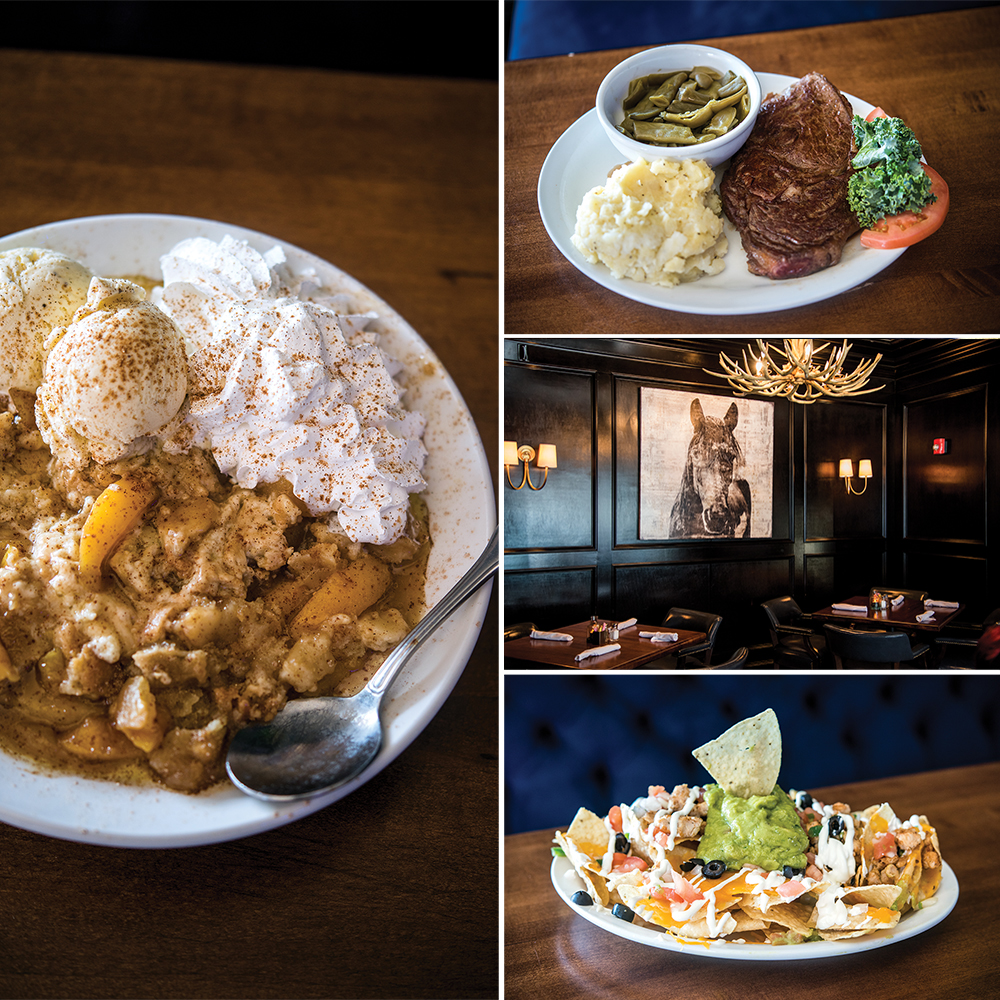 If you do choose a burger, (a) who could blame you? (b) they come in kinds – you can get a Nic’s Original or build your own, but I recommend the gouda, onions, bacon and egg of the Jojo. If you decide to branch out, your options include a load of salty, perfectly seared shrimp, a massive, thick-cut ribeye steak or a chicken-fried steak. The latter didn’t have as much emphasis on batter as some places; it’s more floured-and-fried, which gives more of a spotlight to the meat. Plus, the cream gravy is quite good. Whatever you pick, expect ample portions of the kind of food your grandparents would have praised as sticking to your ribs. Speaking of which, the warm, gooey, cinnamon-covered peach cobbler a la mode is really excellent, though be warned that it’s more than one person can eat. After a meal like this, anyway.

Nic and Jovon aren’t trying to reinvent the culinary wheel or make their own genre of fusion food; this is a big selection of diner classics, done with affection and served in spectacular surroundings.

It might not supersede the original Nic’s in your affections – there’s definitely something to be said for the immediacy of sitting mere feet away, watching and smelling the heap of beef and onions sizzling on the flattop and counting the seconds until you can sink your teeth into it. But for those times when you have a group, are looking for an evening meal or simply want a little more variety, Nic’s Lounge takes the grill to a classy new level.

The bar downstairs is, not to put too fine a point on it, a marvel: The décor echoes and adds emphasis to the leather and massive wooden ceiling beams seen upstairs, using a lower light level and lamps set into the built-in bookcases to cast small, intimate pools of illumination on each island table in a row of semicircular booths. The long, marble-topped bar seats another 16, with room for yet more patrons in conversational groups of couches and chairs nearby. It would be a good secluded spot for relaxing and chatting even if there weren’t a full suite of tempting beverages to explore, from draft cider to a hefty wine list to a pretty damn good Old Fashioned made with brandy-soaked cherries. Don’t miss giving it a look. 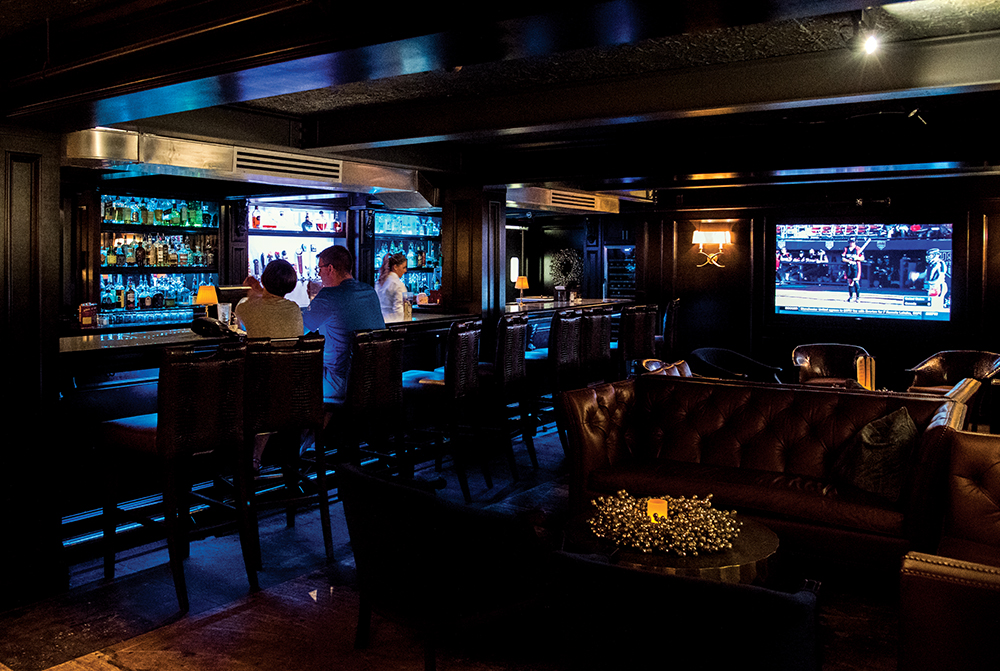