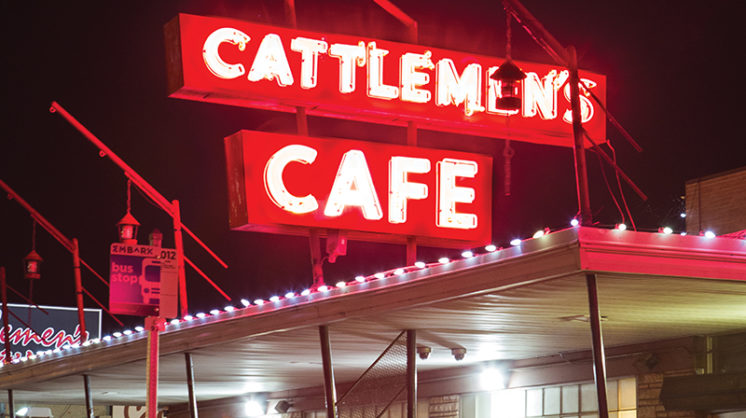 Given that one of our features for this issue looks at the newest set of dining establishments to hit the metro, we thought for our standard restaurant review we’d head in the other temporal direction and revisit a classic. And in OKC, they don’t come any more venerable than Cattlemen’s – founded in 1910. Seriously.

At Home on the Range

Like the Ship of Theseus, individual elements have been replaced now and again without disrupting the overall identity and atmospheric collection of leather chairs, dark red carpet, exposed brick and wood and decorative touches ranging from small vintage photos to the giant illuminated picture that takes up the south wall. The menu gets occasional minor updates, such as the recent addition of a creamy, breadcrumb-topped mac and cheese to the reliable sides of sautéed mushrooms or steamed broccoli, and during the photo shoot I overheard some of the waitstaff discussing brunch at Café Kacao, which seems like a good indication of a slightly more cosmopolitan city than a visitor would have found 80 years ago. But it remains identifiably Cattlemen’s, the spot where ranchers and farmers and John Wayne and George Bush and innumerable unrenowned folks have sat and eaten for a century and counting.

If you set out to create this restaurant today, it would almost certainly feel forced and fake, but it turns out a steady flow of months and years and decades results in a perceptible, inarguable authenticity. Cattlemen’s isn’t trying to be a Western-themed steakhouse, it just is as it is – and when (not if) you see a patron in a cowboy hat, it’s probably part of their daily attire.

This might sound counterintuitive, but unless your party is just immense or it’s a peak hour, I would argue that it’s actually a good thing they don’t take reservations. The waiting area upstairs is spacious and comfortable, with a couple of TVs spread around and a bar should you need to wet down any trail dust in your throat. They even have a house beer: the refreshing, hoppy Double Deuce. A little extra time to soak up the atmosphere is, in this case, a good thing. 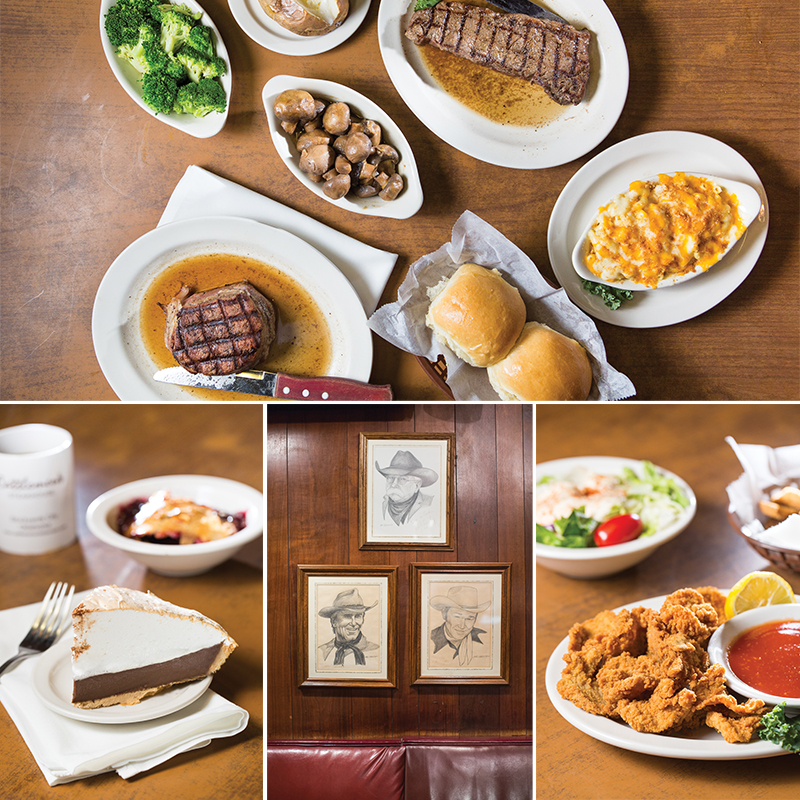 If you don’t know what lamb fries are, I won’t ruin it for you, but since they’re a house specialty, we steeled ourselves and gave them a try … and were pleasantly surprised to discover they’re tasty and astonishingly tender. I might have wished for a dab more pepper in the breading, but as long as you don’t fixate on precisely where they came from, they’re genuinely good. Test these yourself, and enjoy.

The steaks are obviously the main event; cut from corn-fed beef and specially aged, they have beautiful cross-hatchings of grill marks and a flame-broiled savor, especially the bacon-wrapped filet (which is a thick, tender pleasure). The decision to hold the plating to just a splash of jus and let the meat speak for itself, rather than adding a pistachio crust or béarnaise, is a prime example of well-considered restraint.

Since Cattlemen’s is of the old school, all steaks come with a baked potato, massive yeast rolls and a small green salad (don’t let anything dissuade you from getting the house dressing). So plan ahead for a feast, and be forewarned that the cream pies and cobblers are immense, as well as delicious.

It’s a fairly particular kind of meal – I don’t imagine they go through very many orders of the salmon in a week – and to a greater degree than many places, the experience of eating here is about more than just the food on the plates. During this most recent visit, I reached across the table for a piece of toast to crumble into my salad as croutons, and suddenly had a powerful, clear memory of doing the same thing as an 8-year-old seated across the table from my grandfather, a lifelong horse and cattleman who rarely left the house without his own cowboy hat. He passed 20 years ago; I still have his watch in a box at home. And for that moment all the seconds of the last three decades had disappeared. You can’t order a memory like that off the menu.

And if you don’t already have a connection to this OKC institution to draw memories from, you still have time to go make one. Cattlemen’s isn’t going anywhere.

Bear in Mind: While the restaurant’s rep tends to rely on its dinners, it also does an excellent breakfast, and can serve omelettes, pancakes and French toast all day. Yes, and also steak and eggs.