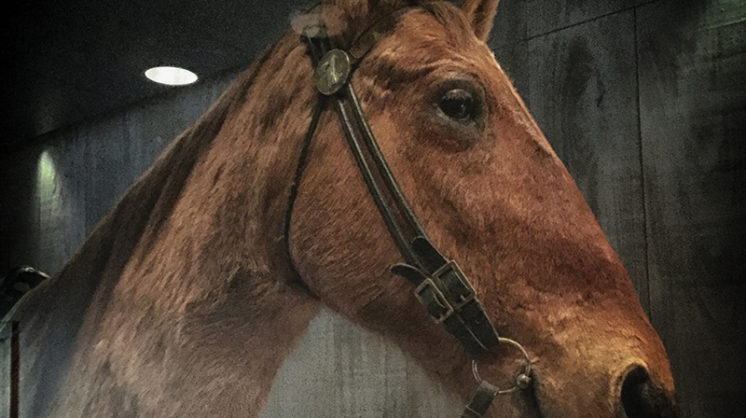 The bay was foaled on the southwestern plains in 1862, running wild across the range as the Civil War raged to the east and the transcontinental railroad took shape to the west. At the age of 6, he was captured in a herd of mustangs and shipped to St. Louis for sale.

Purchased by the U.S. Army for $90 on April 3, 1868, he became one of 41 new horses joining the newly formed 7th Cavalry. It was the spring before the unit’s infamous attack on Black Kettle’s encampment on the Washita River in Oklahoma Territory, near present-day Cheyenne.

The 15-hand gelding became the favorite mount of Myles Keogh, an Irish-born Union veteran of the Battle of Gettysburg assigned to the 7th Cavalry at Fort Riley in the new state of Kansas. Years earlier, Keogh also had been captured — by the Confederates — after his old horse was shot from under him during a battle in Georgia.

Now Captain of Company I under George Armstrong Custer, his new horse soon was shot in battle by an arrow, letting loose a scream that sounded “like a Comanche.”

And so he was named Comanche.

As members of the 7th Cavalry, Keogh and Comanche worked the front line of the government’s attempt to impose order. They were assigned to Reconstruction-era Kentucky, where they took on the Ku Klux Klan and moonshiners, and later to Dakota Territory, where they chased Black Hills gold miners from Sioux land.

By the spring of 1876, the 7th Cavalry was near the Little Bighorn River in Montana Territory. Their orders: force Lakota Sioux, Northern Cheyenne and Arapaho tribes onto reservations.

On June 25, Keogh astride Comanche was part of the five companies of the 7th Cavalry — 268 U.S. Army officers, troopers and scouts, including Custer himself — killed in battle.

Plains Indians, who lost somewhere between 36 and 130 lives, called the fight the Battle of the Greasy Grass. Most everyone else came to know it as Custer’s Last Stand.

Dozens of horses were killed, some shot by desperate Cavalry soldiers hoping to use the bodies as shields from arrows and bullets. Afterward, Indian fighters took the surviving horses for their own, leaving the dead and dying.

Among them was Comanche. He had fallen on the battlefield, wounds in his side matching those from Keogh’s bullet-shattered left knee. He was discovered in a ravine two days later – barely alive, with four flesh wounds and serious injuries to his neck, front shoulder and hind quarter.

As news spread of the Army’s worst defeat in the war on the Great Plains, and the Indians’ greatest victory, Comanche was hailed as the battle’s only survivor, a symbol of hardy perseverance. 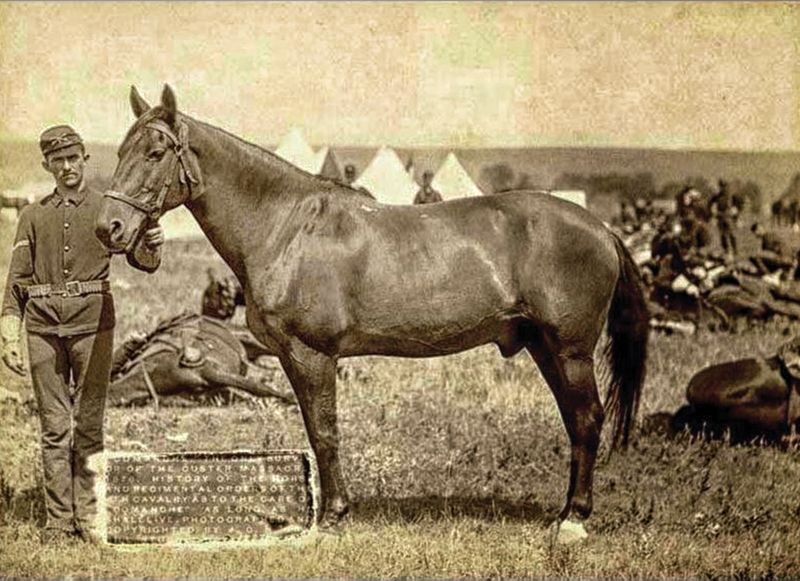 He inspired headlines and paintings, poetry and prose, some evoking Herodotus’ ancient Greek account of the 300 Spartans and Alfred, Lord Tennyson’s “The Charge of the Light Brigade.” An anonymous 1878 poet wrote:

Only his flashing eye

“ … of all that stood at noonday in that fiery scorpion ring,

Miles Keogh’s horse at evening was the only living thing.

Alone from that field of slaughter, where lay the three hundred slain,

The horse Comanche wandered, with Keogh’s blood on his mane … ”

Colonel Samuel D. Sturgis, whose son was among the dead at Little Big Horn, declared of Comanche: “Though wounded and scarred, his very silence speaks in terms more eloquent than words of the desperate struggle against overwhelming odds of the hopeless conflict, and heroic manner in which all went down that day.”

Comanche was nursed back to heath and he was named the unit’s second-in-command. He would never be ridden again. America’s most famous warhorse served as regimental mascot, marching in parades with the 7th Cavalry. He was saddled but riderless, in tribute to the men who had fallen.

He became the first of only two horses in U.S. history to receive a funeral with full military honors. (The other – Black Jack, foaled at Fort Reno Jan. 19, 1947 – served as the riderless mount in more than 1,000 military funerals, including those of Presidents John F. Kennedy, Herbert Hoover, Lyndon B. Johnson and Gen. Douglas MacArthur. The last horse to carry the Army’s U.S. brand, Black Jack was laid to rest in 1976.)

But cavalry officers were not ready to say goodbye. The story goes that Lewis Lindsay Dyche, a naturalist and taxidermist at the University of Kansas, offered to waive his $400 fee if the university could keep the horse. Dyche created a life-sized frame of wood, wire and clay and preserved and fitted the skin to fit. 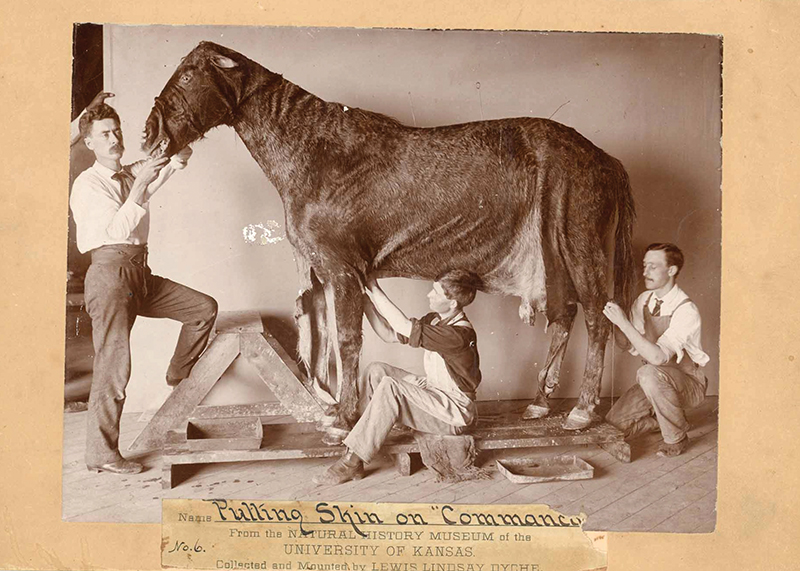 The stuffed Comanche was shipped to Chicago for the 1893 World’s Columbian Exposition. Even among such attractions as belly dancing, the world’s first Ferris Wheel and Harry Houdini, reports noted that “thousands of people came to the Kansas building for the express purpose of seeing what is still in existence of this memorable and historic horse.”

Comanche returned to Lawrence, Kansas, where students would rub his nose or pluck a strand of his tail hair for luck during exams, soon requiring him to be encased in glass.

He has been displayed on various floors, stored in the basement and fought over by museums across Montana and the Dakotas, as well as both the U.S. Cavalry Museum at Fort Riley and the Little Bighorn Battlefield National Monument Museum. Tom Swearingen, exhibits director at KU from 1978-2001, liked to say the horse “has had more battles fought over him than he was in.” One of the disagreements centered on the brass plaque that proclaimed him the only survivor of the Battle of Little Bighorn. It was removed in the 1970s, after it was pointed out that, in fact, hundreds of Indians had also lived.

A century after his birth, his legend lived on in a fully jointed action figure from Marx Toys and a song from Johnny Horton that advised: “Though you are silent, your deeds did speak loud. If your buddies could see you, I know they’d be proud.”

A venerated relic of the American West, Comanche’s remains are preserved in a humidity-controlled glass case on the ground floor to the right of the museum’s entryway, near the restrooms and coat rack, surrounded by recessed lighting and interpretive panels.

More than 150 years after his birth on the Plains, the witness to the last great Native American battleground victory stands on a replica prairie sporting his original saddle. His bridle, breastplate and gold-trimmed regimental blanket are embossed and embroidered with the number 7.

Ears cocked forward, a steer’s skull at his feet, he gazes straight ahead through glass eyes as visitors pause at his reliquary.

Long after the men who captured and broke and rode and revered him turned to dust, Comanche has lived up to his legend. He is the sole survivor.