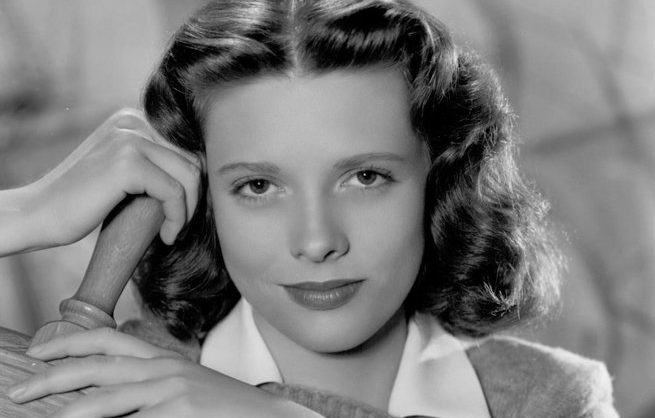 Cathy O’Donnell was different from everyone else. Had she not been, no one would have paid to watch her on the silver screen. And watch moviegoers did – from her first film, 1946’s Academy Award-winning Best Picture “The Best Years of Our Lives,” to her last, 1959’s Best Picture winner “Ben Hur.”

Actor Farley Granger, who co-starred with O’Donnell in two film noir classics, wrote in his memoir that she “was very different from anyone I’d ever met: lovely, shy, wistful and ethereal.” She wasn’t pretty in the Hollywood sense, but she had an enchanting presence, and the fairy-tale life she led began long before Hollywood. To begin with, Cathy wasn’t her real name.

She was born Ann Steely on July 6, 1923 in Siluria, an Alabama mill village near Birmingham and a far cry from the glamour of Hollywood. Her family moved to Oklahoma City when she was 12, where young Ann attended Harding Junior High School and Classen High School before studying stenography for a year at Hill’s Business. She worked as a secretary for the army induction center but had aspirations of acting, stemming from the days when her father, a school teacher by day, operated the local theater by night – giving the kids ample chances to get lost watching news reels, cartoons, war movies and westerns.

Eventually, the adventurous Ann Steely quit her day job and took acting classes at Oklahoma City University, becoming an occasional feature in student productions. She told her brother Joe she hadn’t liked “office work,” calling it “torture” and dramatically adding she’d have died if she’d had to stay in it much longer.

But acting quickly became something she took very seriously – she soon decided to leave Oklahoma City, and in 1944 went to Los Angeles to meet David O. Selznick in Hollywood. She’d sent a letter and picture to the producer and received a quick reply. When Steely arrived in California, she met with Selznick’s casting director, who promised to arrange an audition. But while she was waiting, she got her big break: whether or not she actually met agent Ben Medford at the lunch counter in Schwab’s drugstore as legend has it, he introduced her to the great star-maker Samuel Goldwyn.

“All the daydreams I had as a little girl are coming true.” – Cathy O’Donnell to Kyle Crichton, 1948

Despite her Midwestern awkwardness, she impressed Goldwyn enough for him to arrange a screen test. He then signed Steely to a contract, determined to make the would-be starlet into an ingénue. She studied acting, ballet and diction at the American Academy of Dramatic Arts in New York City, and was soon hired to a touring production of “Life With Father.” She begged Goldwyn to arrange her casting in Tennessee Williams’ “You Touched Me” instead and to adopt the new name “Lark”; Goldwyn was reportedly unimpressed by both suggestions, and convinced her to change her first name to Cathy and “Steely” to the Irish surname of “O’Donnell.”

After a stint in “Little Women” and an uncredited film debut as a nightclub extra, “Miss O’Donnell” was cast in 1946’s “The Best Years of Our Lives,” in which she played Wilma Cameron opposite real-life handicapped veteran Harold Russell. She didn’t know it, but the film’s director, William Wyler, had seen and been impressed by her performance in “Life With Father.”

At the 1946 Academy Awards, O’Donnell proudly accepted Fredric March’s Best Actor award for his work in “The Best Years of Our Lives” – the film also garnered awards for Best Director (William Wyler), Best Actress (Olivia de Havilland), Best Supporting Actress (Anne Baxter) and Best Supporting Actor (Harold Russell)… and a radiant O’Donnell was in the midst of it all.

Her followup roles included “They Live By Night” (1948) opposite Farley Granger, and she was slated to appear with him again alongside David Niven and Teresa Wright in “Enchantment” – but she was dropped from the project when she eloped with William Wyler’s older brother Robert.

“My uncle fell in love with Cathy during ‘The Best Years,’” explains niece Catherine Wyler. “He was always crazy about her, but my family was quite surprised when they married because of the age difference. Uncle Robert was a sweet, lovely guy, but he was my father’s ‘less celebrated’ brother. He always served as my father’s confidante. He did re-writes and associate-produced on a lot of scripts for William Wyler films.”

At the time of the new couple’s nuptials, Goldwyn was still smarting from the desertion of William Wyler – who, upon completion of his pre-war contract, left to join with Frank Capra and George Stevens in the independent production company Liberty Films. Wyler had become one of Goldwyn’s “cash cows,” as “The Best Years of Our Lives” grossed $11.3 million – so for Goldwyn, Wyler’s abandonment was both personal and professional. Granger wrote in his memoir, “Goldwyn took this situation personally and said Willy Wyler had put his brother up to marrying Cathy.” Granger later told his “Strangers on a Train” co-star Laura Elliott that O’Donnell had married Wyler to spite Goldwyn, who told O’Donnell “she would never work again.” Certainly all ties between O’Donnell and Goldwyn were permanently severed, but O’Donnell did finally get that interview with Selznick; she promptly signed with him, re-teaming in 1950 with Granger in another film noir classic: “Side Street.”

Over the next decade, O’Donnell appeared in “Detective Story” (primarily, as she said at the time, “because William [Wyler] was producing and directing”), “Roman Holiday,” the cult horror classic “Terror in the Haunted House” and the epic “Ben Hur,” in which she played Charlton Heston’s sister Tirzah.

By the end of the 1950s, O’Donnell was a fashion icon, both on- and off-screen. For more than a decade she had been photographed for, and profiled in, publications such as The American Magazine and Picture Show, Picturegoer, Redbook, The Sunday News, Screenland, Movie Album, Motion Picture and Snappy Shots.

She then appeared on television a few times, making her last episodic appearance on “Bonanza” in 1964, but mainly enjoying the comfortable and ordinary domestic life into which she and Robert had settled. Their comfortably sized California ranch home, designed by famous builder Robert Byrd, was on Wetherly Drive just above the Sunset Strip. Niece Kathy Steely explains, “I also recall visiting Aunt Ann/Cathy’s house in West Hollywood. We always joked that because the landscaping was tiered, she had a two-story back yard.”

O’Donnell first became ill around this time. “She had tell-tale signs of cancer,” says Catherine Wyler, “and hadn’t done anything about it, and by time she got to the doctor, it was too far advanced.”

In looking back to the time of their aunt’s illness, Donnell’s nieces and her nephew reflect on how well they knew their aunt. “Since Aunt Ann/Cathy lived so far away in California, and we were in Oklahoma,” recalls Kathy Steely, who was only 12 at the time of O’Donnell’s passing. “We didn’t see her much, but I was in awe of having a ‘movie star’ aunt!”

“As children growing up, we did feel special having a ‘movie star’ aunt,” concurs David Steely. He adds his aunt must have sensed his musical ability – he had played the guitar since age 11 – because she “once gave me several of her poems as lyrics to any music I might write.”

Shortly thereafter, “She phoned my father,” David Steely recalls, “and said, ‘There’s a new movie being made that calls for several children. Would you consider letting the kids audition?’ and my father said, ‘Absolutely under no circumstances whatsoever would I remotely consider that!’ The movie was ‘The Sound of Music.’”

Even if O’Donnell’s plans had come to fruition, one glitch would have been that her brother-in-law William Wyler dropped out of directing the film. Melanie Wyler says “Cathy O. knew about auditions for ‘The Sound of Music’ because my father was originally slated to direct that film. But he pulled out of the project because, given his background and Jewish heritage, he couldn’t, in his words, ‘make a movie about singing Nazis.’”

Cathy O’Donnell finally died from complications due to cancer at the age of 46, on her 22nd wedding anniversary. Throughout her lengthy illness, she drew strength from her faith, having converted to Catholicism after coming to Hollywood. Catherine Wyler remembers, “Cathy O. became Catholic after her marriage to my uncle, and I recall my because my parents jokingly saying a Catholic convert’s more ‘Catholic’ than the Pope. She was very devout, though my uncle and father were secular Jews. Catholicism gave Cathy O. more romance and drama.”

Even with all the credits to her name, O’Donnell didn’t consider herself a huge success. Catherine Wyler remembers that “She wasn’t very satisfied with her career because there were a lot of ‘B’ movies.” Nonetheless, of Donnell’s 17 films, all in starring/featured roles, seven are classic film-noir/quasi-noir, making her a major contributor to that genre.

“I remember Cathy O. as a very lovely, quiet, sweet person,” remembers Sheldon. Catherine Wyler concurs, adding, “But, she wasn’t practical; she liked to live in a dream world, and she always thought of herself as a young woman.”

Funeral services for O’Donnell were held in Forest Lawn on April 11, 1970. Her obituary described her as “a resident of Oklahoma City during the early 1940s” and “the wife of a motion picture executive.”

Ann Steely’s journey from Oklahoma City to Hollywood had been a long one, and was the stuff of which dreams are made.