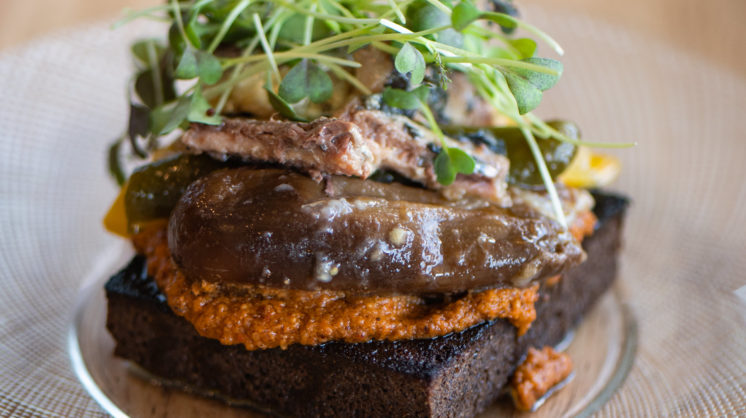 The story of Sedalia’s Oyster & Seafood (2727 NW 10th St., OKC) begins in Edmond and Cochabamba, Bolivia. The Bolivian place name essentially translates to “swamp” — a fitting name given the area around Silvana Arandia Walters’ hometown. She is one half of the husband-wife team who challenged each other to do something bold in Oklahoma City … but that’s getting ahead of the story.

“My dad was a banker in Bolivia, and my mom worked in the open-air markets in Cochabamba,” Silvana said. “She practiced whole-animal butchery and cooked traditional food. They struggled financially, so my dad moved to Virginia and became a plumber.”

After Silvana graduated high school in Virginia, she had gone to New York City looking for a university, but fell in love with the hospitality industry first. Seasonal depression affected her greatly, so she made plans to move to Los Angeles.

“There was a large community of Bolivian immigrants in Virginia, which is why my father chose it originally, and I loved the diversity of New York City,” she said. “I loved New York City, but after 10 years, I couldn’t take the seasonal depression.”

Meanwhile, Chef Zack Walters started his culinary career as a busser at Bellini’s and then worked in the kitchen at Gaijin Sushi in Norman before heading to San Francisco, where he attended culinary school. He spent 18 months in San Francisco before moving on to Los Angeles, where he’d spend 15 years cooking, including a few at his own place called Salt’s Cure.

“Silvana and I met in Los Angeles,” Walters said. “I was near the end of my L.A. thing — traffic, pace, all of it. I wanted to go someplace smaller and get creative again. So we talked about where to go. She’s the one who mentioned Oklahoma City.”

There was no real Bolivian presence where they lived in L.A., so Arandia Walters made friends among the first-generation immigrants from Oaxaca and other regions of Mexico. “I fell in love with Chicano culture,” she said. “Zack was doing this modern American restaurant with whole-animal butchery like my mother did, but we didn’t necessarily know what was next for us. We just knew we were headed someplace smaller with a growing scene.”

The couple spent weeks researching markets and looking for an up-and-coming food scene. Zack was peripherally aware that breweries in Oklahoma City were winning awards, and he’d seen some press, but after 18 years away, he wasn’t necessarily thinking about a return.

“I’d always come home about once a year to see family, but I never took seriously the idea of a return to Oklahoma City,” he said. “Silvana finally asked why after she’d done a bunch of research on what was happening here. My family wasn’t involved in the food scene, so they didn’t have much to offer. On our last trip back, we made a run to Hochatown, looked around the food scene in Oklahoma City, and realized we could use my family’s spot on NW 10th near May.”

The building — a playground equipment company office — wasn’t ideal for a restaurant, but it could be modified. They worked through several ideas, including a pollo al carbon drive-up spot, before having a serious conversation about making bolder choices. Ultimately, and fortunately for OKC diners, they opted for a combination of Zack’s California-fresh approach combined with Silvana’s Bolivian background, including anticuchos (skewers, usually of beef heart or other red meats) and other traditional dishes. After a few pop-ups around OKC, Sedalia’s opened.

The name comes from Walters’ paternal great-great-grandmother, not the city in Arizona, and it’s pronounced differently too: suh-DAHL-yuhs. The menu is hand-written every week based on what’s available fresh, but it’s always a mixture of fresh seafood, including raw and smoked oysters, fish — fried, smoked, roasted, crudo, etc. — and anticuchos.  Speaking of which, the octopus anticuchos feature the best octopus preparation you’ll find in the 405. Zack makes a house hot sauce that you’ll want to keep for every course, and the sauces are a combination of classical seafood sauces and Bolivian specialties, like the peanut sauce on the beef heart anticucho.

“We weren’t nailing that sauce at first, and then (sous chef) Amaru — he’s Bolivian also — and Silvana told me how their families made it,” Walters said. “It’s closer to a paste than a sauce, so we reworked it, and now they both love it.”

The sauce/paste is made with aji amarillo, so there’s a slight kick to it. Spiciness isn’t the goal at Sedalia’s, fresh is, but there are pops of heat hiding here and there, and it always hits as a pleasant surprise. So does the bar program, with its stellar gin and tonic and quirky wine list. It’s simple, flavorful and playful, just like the food menu.

The seating is mostly patio, which is being wrapped for winter as of this writing, so they’ll still be able to accommodate “outside” dining. Don’t leave without trying the olive oil cake, and absolutely don’t leave without getting a slice of the best pumpernickel bread you’ll find anywhere outside of a Jewish deli in the northeastern United States. Flavor favors the bold.