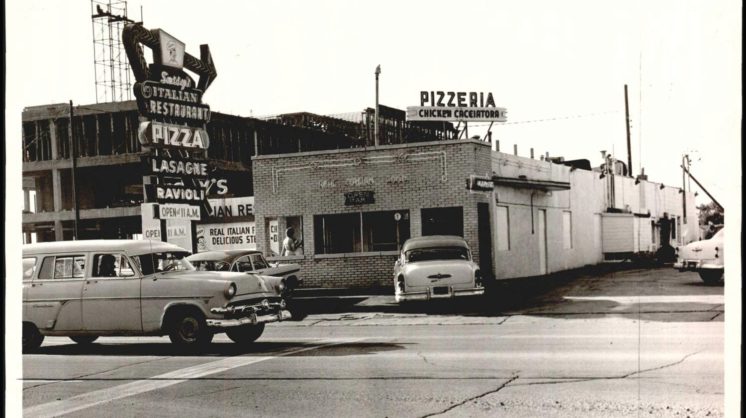 It boggles the mind and pains the stomach, but there was no pizza in Oklahoma City as recently as the end of World War II. Jack “Sussy” Sussman, a businessman and gambler with his hands in some shady operations, played a key role in rectifying that problem and bet on introducing pizza to the plains.

At the time and for decades afterward, Oklahoma City was the cafeteria capital of the world, a town where dining out meant going to a place that served many of the same things that might be prepared at home. Whoever introduced pizza to the city would have the corner on the market.

Sussman was a regular at the Jamboree Supper Club, a bring-your-own-liquor establishment with exotic dancers that was operated by a wheeler-dealer named Jake Samara. Samara was frequently at odds with the law, getting shut down at various times for operating a slot machine on the premises or for having dancing in close proximity to alcohol. Sussman and Samara became friends and Samara hatched a plan.

According to Dave Cathey of The Oklahoman, Samara suggested to Sussman that they should open an Italian restaurant, and that Samara would start calling his new business partner “Sussy,” which sounds vaguely Italian. In 1947, Sussy’s Italian Restaurant opened at 629 NE 23rd St., across from the Jamboree.

In a newspaper advertisement from that period, Sussy’s exhorts Oklahomans to “bring the family and dine in a true candlelight atmosphere. Economical too! Four persons can share a 14-inch pizza for about 35 cents apiece.”

Sussy’s expanded quickly, creating an Italian cuisine empire that would come to include Jack Sussy’s Italian-American Restaurant and Steakhouse with locations on S. Robinson Avenue, N. Western Avenue and Sussy’s Tally-Ho Restaurant on N. Lincoln Boulevard. When one of his restaurants caught fire in 1966, Sussy got popped on an arson charge but was not convicted.

The last restaurant Sussy opened was Nomad II, 7301 N May Ave., in 1975. Sussman died five years later, and Rick Bailey carried on the tradition at that location until 2016. The following year, Bailey opened a short-lived Sussy’s location at 200 S. Oklahoma Ave. in Bricktown, which served about 70 percent of the Nomad II menu, including the deep-fried pepperoni pizza that Sussy pioneered.