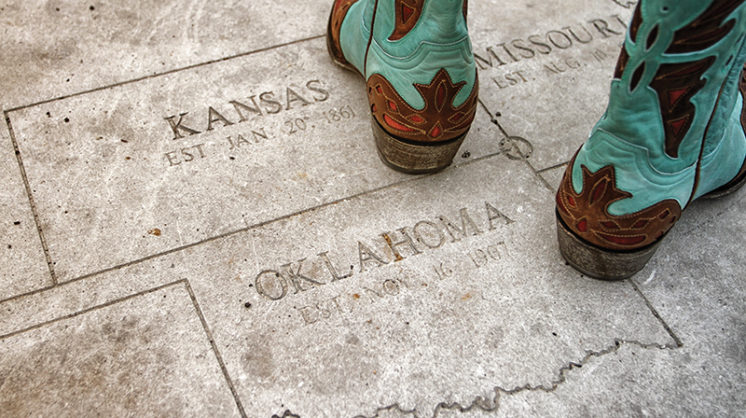 It represents a Quapaw quandary: On the last inch of the far northeast corner of Oklahoma, where the state abuts Kansas to the north and Missouri to the east, a dead-end gravel road leads to two monuments.

The impressive one stands to the right, a cairn of native rocks piled 15 feet tall with indentions for plaques proclaiming its significance. Built in 1938 by the Depression-era Youth Work Administration, the Tri-State Marker was meant to mark the point where three states met.

But its builders were off – by about 50 feet. For nearly eight decades, the misplaced tower has been stubbornly standing squarely in Kansas.

The less-imposing one is to the left, a flat slab engraved with the outlines of the three states and centered on a circle denoting the exact point where their borders meet. Inscribed on top of the stone is a declaration that the marker was “Remonumented” in October 2004.

It was the brainchild of the Missouri Association of County Surveyors, which funded and installed the new stand-here plaque marking the magical intersection in the middle of Stateline Road in Quapaw.

In the hope of trumpeting the spot’s significance, the surveyors also included their own explanatory sign, sealed under plexiglass and bolted to a metal frame that was, in turn, attached to a wooden railing.

The sign recalled that the massive stone marker once housed brass plaques inscribed “Oklahoma 1907” on the south side, “Kansas 1861” on the north side and “Missouri 1821” on the east side. The earlier surveyors and the scope of their task were memorialized: “This point was established in 1857 by an 800-member expedition starting at the southwest corner of Missouri and working north. The party included soldiers, teamsters, cooks, astronomers and surveyors. The expedition took nearly six months, being hampered by rough terrain, heavy timber and high water.”

Their offering of historical context was not to last for long. The sign and part of the low wooden railing that protected the new monument suffered the same fate as the stone tower’s original brass plates, and disappeared from the site.

The two monuments remain, though, locked in stony argument about measurements made 160 years ago.

The newer version embedded in the center of road wins the nod for accuracy. Visitors, however, seem just as happy to pose in front of the photogenic 1938 tower, hulking across the border on the wrong side of history. 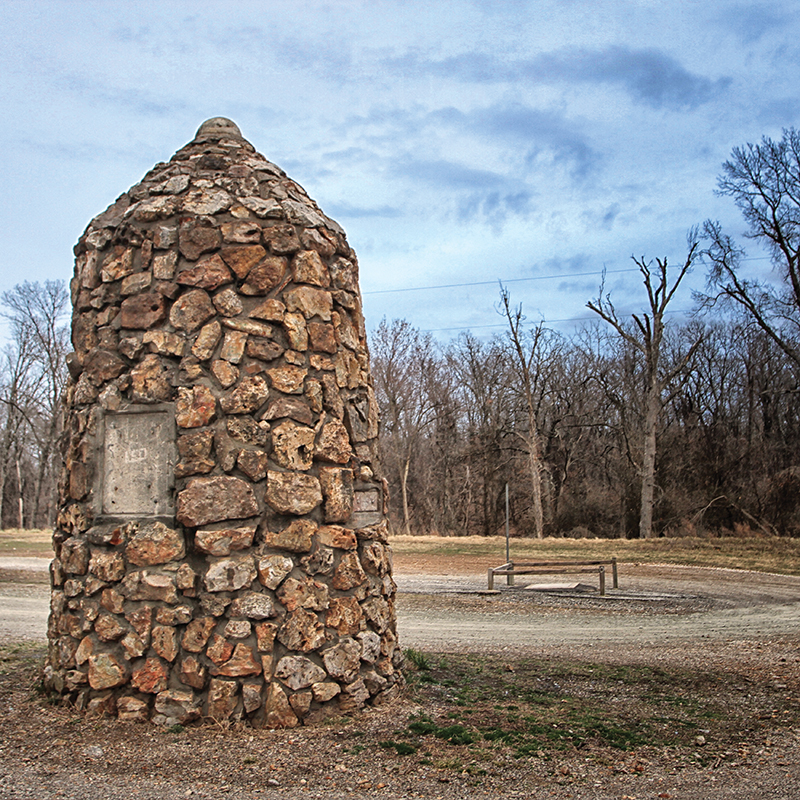 The mother lode of American geographic intersections is the Four Corners Monument on the Navajo Nation, the only point where four states meet. Slightly more common, a place where three states converge is called a tri-point or a trifinium. Oklahoma boasts five tri-point markers on land and a water-based trifinium in the middle of the Red River.

Cimarron County, the nation’s only county that borders four states, is home to three trifiniums:

The Texhomex Corner in the Rita Blanca Grasslands, where Oklahoma’s land meets those of New Mexico and Texas.

The Preston Monument near Black Mesa, named for surveyor Levi Preston and  marking the junction of Oklahoma with Colorado and New Mexico.

• The oldest marker in the state is located at the Okarmo Corner, at the junction of Arkansas, Missouri and Oklahoma. It was set in 1823, 20 years after the Louisiana Purchase, two years after Missouri statehood and four years after Arkansas was declared a territory. The marker was refurbished in 1915, 1955 and again in the 1960s.

• The original Tri-State Marker denoting the Kansas-Missouri- Oklahoma corner convergence is the state’s largest, and the one farthest from the actual point where the three states meet.

• The water-based intersection of Arkansas, Texas and Oklahoma, sometimes called the Oktxar Corner, falls 300 feet offshore in the Red River.