Raise a Glass to The Study - 405 Magazine 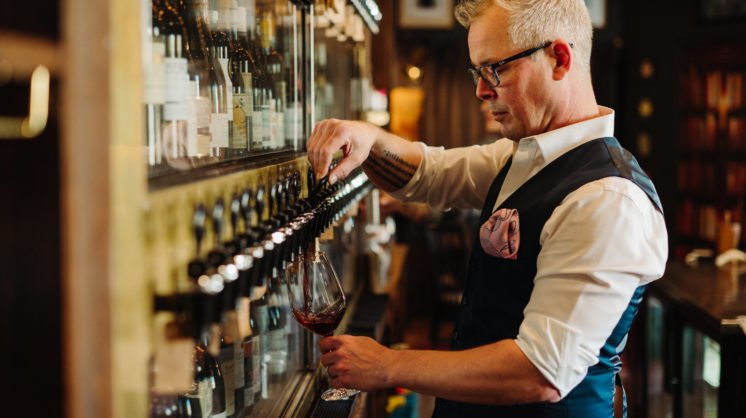 A wine-lover’s paradise on Film Row.

The Study was almost called The Nook, but a phone call with a trusted mentor convinced operating partner Ian Bennett that he needed to go a different route, even as he realized the interior of the Film Row “wine pub” at 701 W. Sheridan Ave. would be — as he put it — nook-y. While The Study’s opening was immediately followed by the onset of the pandemic, the ownership team — which includes Bennett’s scientist wife, who cured a form of hearing loss this year, and their friends John and Megan Allen — managed to endure the financial hardships wrought by COVID’s march.

As 2022 comes to a close, the wine bar is what Bennett hoped it would be when they started the adventure: a place where he can meet people wherever they are on their wine journey.

“I never want to yuck someone else’s yum,” Bennett said. He’s an affable and gregarious man in the bar — even a bit frenetic — but it’s a practiced extroversion; he and Elaine are both introverts by temperament and preference. “Wherever you are, I’ll meet you there, even if you tell me our Moscato d’Asti isn’t sweet enough for your taste.”

For Bennett, wine should be accessible. He’s a certified sommelier with the professional experience and palate to accompany the professional credentials. He was the opening sommelier at Ludivine, where his first list described the Rosé section thus: “These are Pink and not Sweet.” The irreverence or at least iconoclasm is refreshing in a world that often has stodgy gatekeepers, of the variety he was too familiar with in Los Angeles — a city known as much for pretension as great restaurants.

“I had a good friend in L.A. who had done very well, and he took a ton of his profits and converted them into wine,” Bennett said. “He’d say, ‘Ian, have you ever had an ’89 Haut Brion?’ and I was like, ‘Of course I haven’t!’ So he’d invite me over and open a bottle. I learned generosity from my friend, so how can I do otherwise at my own bar?”

That generosity and openness are made possible in business terms by the purchase of the Cruvinet system, a beautiful 64-bottle system that prevents waste, meaning that Bennett can offer wines by the glass at any price point. Any price point, as in $150 a glass to $8. Or he can pour super high end wine by the ounce and not lose money. That alone makes The Study one of the best choices in the 405.

“I lost $300 a week in wine at previous restaurants,” he said. “With the Cruvinet, I might lose the inch and a half of wine that’s in the tube if it sits for three days. Otherwise, there is no waste, and the system pays for itself at some point.”

Just as with the wine, The Study’s interior is accessible. Nerdy — Bennett won’t be offended — easter eggs are plentiful among the roughly 5,000 books and 8,000 tchotchkes, gewgaws, objets d’art, prints and toys scattered throughout the bar. Nooks and rooms provide semi-privacy, and the area around the bar is louder and more open by design. You can have a date night in the nook, or an argument about Napa vs. Sonoma at the high top. Bennett just wants you to have the experience you want, and to enjoy some wines.

Bennett designed The Study with himself in mind — which is to say, he assumed the target demographic was a 45-year-old Gen Xer, but he’s now carded more people than he ever expected, and he loves (LOVES) the Gen Zers.

“They’re adventurous and daring,” he said. “They’ll try things just because they’ve never tried them before. A quarter of our clientele is Millennials. We never expected that.”

The generosity manifests itself in two more important ways, as well, regarding nearby businesses: “We don’t do cocktails, and when people look at me side-eyed, I just point them to [Bar] Arbolada, because they make great cocktails, and if you want food, I tell them to go to Joey’s Pizzeria and bring the food back here so I can pair it with something delicious.”