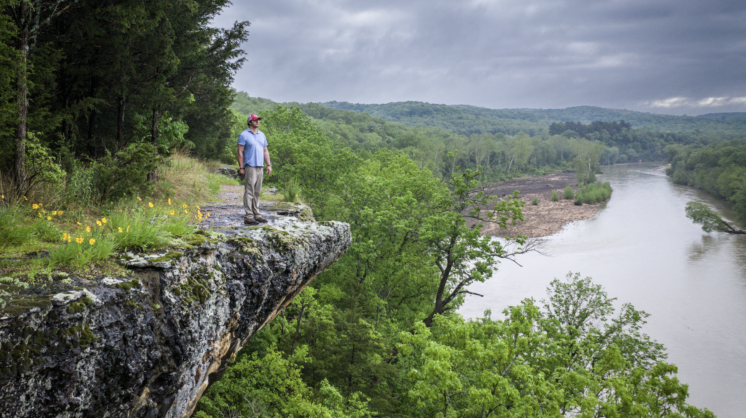 In the east wing of the State Capitol, the walls are lined with breathtaking photos: towering mesas under the Milky Way, prairies thick with bison, fall foliage reflected off the surface of a glassy mountain river at dawn. The landscape diversity is so vast that a visitor might conclude that the images had come from all corners of the world. In truth, each of these stunning images was shot in Oklahoma, exclusively by Oklahoma photographers. Earlier this year, Lieutenant Governor Matt Pinnell created a photo competition challenging Oklahoma-based photographers to capture images of our state and post them on Instagram using the hashtag #OklahomaTravelTakeover. The winning images would then be hung in the halls of the Capitol, and ultimately would dress the walls of Pinnell’s office.

Of course, Lt. Gov. Pinnell knew the outcome of the competition would be spectacular – because perhaps no one right now is as dialed into our state’s natural beauty and hunger for growth as our Lieutenant Governor. In addition to the duties of his elected office, Pinnell also serves as Oklahoma’s first Secretary of Tourism and Branding, and in a short time has done remarkable things to change the way not only Oklahoma, but the world, sees the Sooner State.

“Tourism is the front door to economic development,” says Pinnell in our September interview at the Capitol. “If you could get people spending money in these communities, and people see how great this state is, it changes the perception of our state.” Pinnell spent part of his campaign on an RV tour across the Sooner State, which enabled him to spend time getting to know Oklahomans and also to take in the beauty and natural resources our state has to offer. “We went all around Oklahoma,” he says. “We traveled all over the state, from northwest Oklahoma to Broken Bow.” The journey confirmed what Pinnell – thanks to a lifetime of travel – already knew. “You don’t have to go to Arkansas to go hiking and to go trout fishing and to see museums. You can do all of that in Oklahoma … and it is better.”

The state’s natural beauty has played a role throughout Pinnell’s life. “I would say a lot of my early experience traveling around Oklahoma was fishing with my grandfather,” he says. “Some of my favorite memories growing up were fishing at Fort Gibson Lake and Sequoia State Lodge.” The ubiquitous tradition of fishing in Oklahoma is something Pinnell has considered an opportunity for expansion: The Oklahoma Fishing Trail is one initiative the Lieutenant Governor sees for tourism to boost our state economy.

He has passed his love for travel and the outdoors on to his own children, as well. A father of four, Pinnell often considered what opportunities were 30 minutes outside the front door. “We love camping and museums,” he says. “We are a family of six with four kids, so I can really relate with families around the state that are looking for something that they can do on a tank of gas. So I am making sure that in the tourism department, we are highlighting those opportunities.”

Whether it is the small towns around Little Sahara State Park or a farm-to-table experience in Luther, Lt. Gov. Pinnell wants Main Street to know that he is in their corner. “The small-town charm that we have really sells. Agro-tourism sells. If we put more marketing dollars behind it.” Recently, Pinnell and his wife had a getaway to Guthrie. “It was the last weekend for Red Brick Nights. We stayed in a loft in downtown Guthrie. One of the coolest experiences I’ve ever had was walking around at night; you feel like you stepped back in time.”

As I walk out of the Capitol after our interview, I think back to Pinnell’s parting words: “If you want to see America, you need to see Oklahoma.” As I glance again at the beauty and diversity of the 24 images of Oklahoma that line the capitol’s walls, I can’t help but think he’s exactly right.

Lt. Gov. Matt Pinnell has devoted himself to promoting Oklahoma’s natural beauty in an effort to boost tourism.
Share