Taco Nation Puts Down Roots in the Wheeler District - 405 Magazine 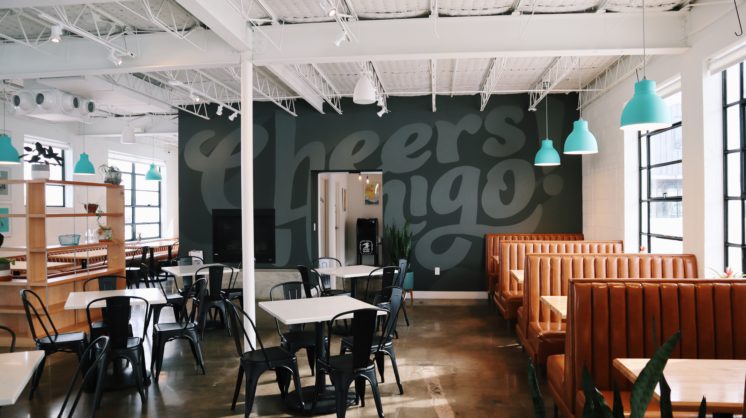 Bus turned brick-and-mortar restaurant Taco Nation debuts Tuesday, March 1, in the space formerly occupied by Terminal Commons in the Wheeler District. Tim Ulrich moved to Oklahoma City from California more than a decade ago, and started introducing friends to the Baja-style tacos his family enjoyed back in California. Using a converted bus, Ulrich turned Taco Nation into one of the city’s most popular food “trucks.”

“We’d been running the bus for about four years, and the timing seemed right to go from bus to brick,” Ulrich said. “We’d already been posting up at The Big Friendly [in Wheeler] on Tuesdays and Thursdays, getting to know and enjoy the neighborhood. We had a conversation with the property management after the space came open, and it seemed to work for everyone.”

The space — a refurbished terminal for the Downtown Airpark — is rich with its own history, as it was a central hub for passengers and employees at the airpark beginning in the 1940s. A restaurant was in the terminal, and it served burgers, chicken-fried steak and other country cooking. The previous tenants, Terminal Commons, ceased operations late last year, and Ulrich said it was a simple matter “to change the paint color” and make other decor changes.

“The Wheeler District said they wanted a concept that will bring the neighborhood together, and we love the idea of food shared among friends,” Ulrich said.

The transition from bus to building requires an expansion of the menu, and Ulrich said it will evolve the menu slowly, adding salads, starters and a few new tacos to get things started. Taco Nation received its mixed beverage license last week, so it will be offering local brews and margaritas to wash down the house-made guacamole, queso and salsa. Staff will be developing a few styles of queso, but ultimately Baja is not Tex-Mex, so the focus will be on the tacos.

“Baja seasoning is fresh and light,” Ulrich said. “It’s salt, pepper and citrus, not the cumin and paprika of Tex-Mex. It doesn’t rely too heavily on sauces.”

The starter menu will have rolled tacos (like little flautas) and “tacos dorados de papa,” which are crispy tacos with mashed potatoes, a regional specialty in parts of Mexico. Ulrich said the menu will also have a 14-inch quesadilla. The plans are evolving, so items will be landing on the menu over the next few months.

The new menu will soon feature a chimichurri taco, and Ulrich said he’s working on an ancho-lime taco, as well as a chimichurri steak salad to add to the salad options. Basically, Taco Nation will enable guests to eat as healthily or not, as they prefer.

For at least the first month, Taco Nation will be dinner only. “We’re having the same staffing issues as everyone,” Ulrich said. “Our team is already stretched thin, so dinner only will be all we can manage for now.”

Taco Nation will be open from 5 to 8 p.m. Tuesday through Thursday, and 5 to 9 p.m. Friday and Saturday, closed Sunday and Monday.