The Human Wolves of Konawa - 405 Magazine 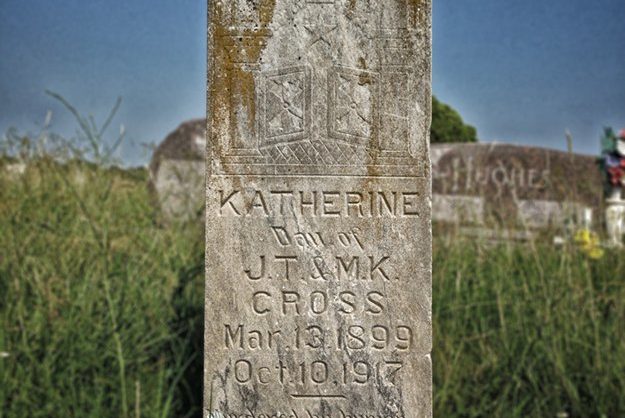 The cemeteries sit east of Konawa on Highway 39, divided by the county line. Violet Springs is smaller, situated on the Pottawatomie side. Graves obscured by long grasses memorialize infants and toddlers who would be centenarians now. Tombstones remember mothers mourned, young soldiers killed in World War I and old veterans of World War II.
On the Seminole County side is Konawa Cemetery, better kept and with more markers. From the west, to the left of the one-track road, is the most enigmatic gravestone in Oklahoma. At the top, a carving of heavenly gates opens to reveal a single star. Then, the following inscription:

Below the dates when Katherine Ann Cross drew her first breath and her last is a brief epitaph, chiseled in a left-leaning script: Murdered by human wolves.

Those four ominous words, carved on the orders of a grieving family 96 years ago this month, have spurred decades of tales and oft-repeated whispers. The idea that human wolves – werewolves, maybe – roam the wilds of Oklahoma has intrigued ghost-hunters and amateur detectives, historians and mystery writers. Many have imagined, or even concocted, a story behind the story.

John Taylor Cross and his wife, Mary Katherine Diehl Cross, had moved to Oklahoma with hopes for a better life for their family of 10. During the Great War, they left the Arkansas town of Vilonia in Faulkner County to head west with their four girls and four boys: Katherine, Ursie Mary, Esther, Ella, Claud, Clyde, Marvin and Raphen.

Katherine was the oldest, named for her mother and her mother before. The day she was born in 1899, a Sunday, came exactly one week before her parents’ first wedding anniversary.

On the day she was buried, 18 years later, J.T. Cross had one small consolation: at least his own mother was not there to see Katherine consigned to the Oklahoma dirt.

Sarah Elizabeth Godsey Cross had died two years before, and now lay buried in the Konawa Cemetery. Her husband, Absalom, had died in 1898 and was interred back in Vilonia. There was an empty plot beside Sarah in Konawa, and that is where young Katherine was laid to rest.

“For the second time within sixty days, Dr. A.H. Yates, a Konawa physician, is facing a charge of performing a criminal operation. On information filed by County Attorney Al G. Nichols, he was arrested at Konawa, accused of murdering Katherine Cross, pretty 18-year-old daughter of J.T. Cross, a Konawa farmer.”

The newspaper reported the investigation “developed the fact that the girl would have become a mother within the next six months. Yates is accused of attempting to prevent that result. He is said to have coerced Mrs. Cross into tacit permission by telling her the girl was threatening to kill herself. The information was withheld from Cross, it is said.”

The report quotes County Attorney Nichols declaring “the parents of the dead girl have told the whole awful story, and are ready to testify to the facts on the stand.” The final paragraph noted: “Another arrest is expected soon in connection with Katherine Cross’ death.”

Within the week, the charge against Yates in Katherine’s death was downgraded from first-degree murder to first-degree manslaughter, and the doctor was again released on $10,000 bail. As the days and months passed, no news was reported of a second arrest.

On Feb. 23, 1918, Yates was acquitted of manslaughter in district court … however, this was actually a verdict for the earlier case of 18-year-old Elsie Stone, who had died two months before Katherine. Yates was arrested for committing an “illegal operation,” and apprehended by officers while singing in the choir during a revival meeting. Fred O’Neil also was arrested, charged with procuring the procedure. Friends of Stone testified that she had been impregnated by O’Neil, the married principal of the Vamoosa school where both taught. In reporting his acquittal from Wewoka under the headline “Jury Liberates Konawa Doctor,” the news article mentioned the Katherine Cross case with a cryptic line: “Another charge of the same nature is pending against Yates, but will not be tried this term at court.”

No details or follow-ups were reported. The outrage, which four months earlier had gripped Konawa townspeople to the point that Yates was brought under guard to neighboring Pottawatomie County for his own protection, faded away.

The Cross family never received their day in court. They relocated after Katherine’s death, moving to a farm 100 miles southwest, between Ringling and Waurika.

Eleven years later, the Crosses were approached by Neely Jackson and W.T. Corbin, candidates for the office of Pontotoc sheriff. By then, the arresting officer in Katherine’s case, Deputy Fred Bowles, was sheriff of Pontotoc County. Jackson and Corbin asked the Crosses to swear an affidavit against Bowles. The Oklahoma Court of Criminal Appeals, meeting in 1931, summarized: “The affidavit secured by the defendants from J.T. Cross and his wife contained statements charging Fred Bowles co-operated with Dr. Yates and Arthur Bowles in causing an abortion upon their daughter Katherine which caused her death.”

Sheriff Bowles maintained his innocence, the Pontotoc County Court found Jackson and Corbin guilty of libel and slander, and the Oklahoma Court of Criminal Appeals upheld the conviction of a $1,000 fine each and one year in the county jail. The courts concluded there was no proof of the claims and that the failed candidates for sheriff had tried to spread gossip for political gain.

There appears to be no further mention of the case of Katherine Cross. Eventually, J.T. and Mary Katherine moved to Bryan County, closer to the Arkansas border. J.T. died in the spring of 1957, one day after their 59th wedding anniversary. Mary Katherine followed the next year, at the age of 80.

Today, their simple gray marker is found in the Bennington Cemetery. It contains no final statement or elaboration beyond a carved flower and vines in the upper corners, with dates of birth, death and marriage.

Dr. A.H. Yates died in 1931, at the age of 64. His remains are interred in Konawa Cemetery, within view of Katherine’s tombstone.

Only Katherine’s gravestone bears an epitaph. The full story behind those four words, “Murdered by human wolves,” lies buried with her, silent as the grave.

Editor’s Note: This is the 14th installment in a continuing series as author and photographer M.J. Alexander chronicles her travels across the state of Oklahoma.