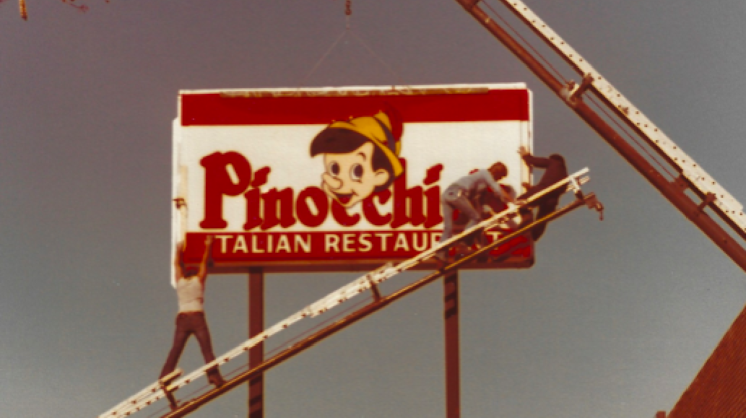 Way back in 1972, the list of Italian eateries in Oklahoma was short. There was no Olive Garden, no Johnny Carino’s, even Pizza Hut was in its infancy. ut that year in Norman, Pinocchio’s began serving up spaghetti and pizza to customers who often waited hours to get in the door. The restaurant had several locations through the years – on Elm Street, Robinson and Lindsey – and it was a favorite among locals who knew exactly where to find the best breadsticks in the universe. Owner Glen Woods graduated from the University of Oklahoma in 1969, after earning a degree in music education. “My mother was a really good cook, so I got my joy of cooking from her,” he says. “She had so many good recipes and I spent a lot of time going through those, experimenting to find what worked and what didn’t. I think that’s why we were so successful all those years.” The restaurant gained a reputation for excellence, and the lines to get a table routinely wrapped outside the building, down the block and around the corner. That was typical on game days in Norman, and really any day in general. Much of Woods’ staff consisted of young students from OU, and he wanted to make sure Pinocchio’s was not only a fun place to work, but also healthy. “I was one of the first restaurants to go completely smoke-free,” he says. “We built a new building in 1993, and I knew I wasn’t going to have any smoking. It choked me to walk into a smoke-filled dining room, and I certainly wasn’t going to subject those kids to working around all that smoke.”

The end came in 2001 when the final breadsticks were taken out of the oven. After nearly 30 years in business, Woods decided it was time to call it a day.

“I had a suggestion box out front, and when we closed it was stuffed full of letters, asking us to stay open,” he remembers. “I had a good time, but I couldn’t see myself doing that when I was 80! So I knew it was time to say, ‘So long.’ There were so many experiences that are etched in my mind, and I had a great time serving my customers for so many years. I’m happy to know I made a difference, and that people still remember the great food and fun that came out of Pinocchio’s.”

“We served a lot of pizza and spaghetti,” Woods says, “but we also served burgers and sandwiches. The thing we were famous for, however, was our breadsticks. We used one ton of flour every week, and the breadsticks were always made fresh every day. I had a board that was four feet by two feet, and I would lay the dough out on that, brush the top with milk, put sesame seeds on top and then let it rise. Customers just couldn’t get enough!”