When El Charrito was King - 405 Magazine 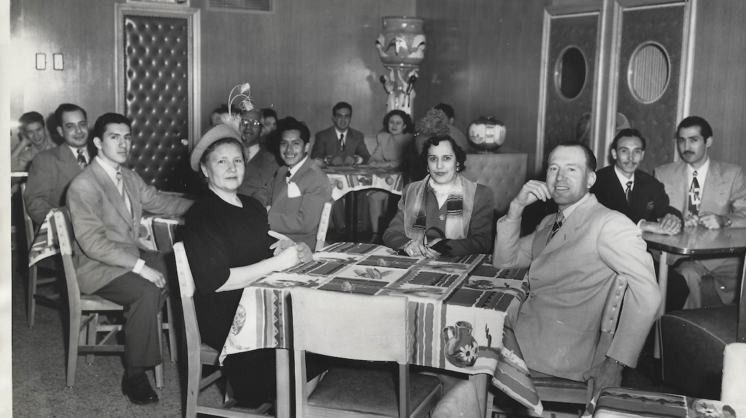 Back in the summer, my friend Robert Mills invited me to dinner with his fiancé, Phil.  Robert is Artistic Director for Oklahoma City Ballet, and Phil is a physician, so scheduling time for dinner is quite a feat. Our exotic dinner locale was Zorba’s, on N. May Avenue.  I had been there before, but on this visit a wave of déjà vu swept over me, taking me back to my childhood when the building was known as El Charrito.

Back in 1968, I – all of 5 years old – finished my tacos and went exploring, while my mom and her best friend Fayetta remained in the corner booth savoring their Winstons. (Mom quit smoking in 1986, and did it cold turkey, she wants you to know). I went to the lobby and tried to snag a copy of the Oklahoma City Times from the newspaper rack – I couldn’t read yet, but it was the thought that counted – only to realize that my arm was firmly stuck in the slot. After what seemed like an eternity, but was really just a few seconds, Mom and Fayetta emerged from their cloud of smoke, put a dime in the rack and released me back into the wild.

So, walking into that lobby at Zorba’s with Robert and Phil this summer, I could suddenly see little Mark struggling to free himself from that menacing red newspaper rack. I could also vividly remember the glorious Mexican restaurant it had been.

El Charro first arrived on the scene in 1937 in the Paseo District and was Oklahoma City’s first Mexican restaurant.  A few years later, the building was destroyed in a fire. Owner and founder Louis Alvarado renamed it El Charrito, and other locations soon followed.

In the late 1960s, Alvarado joined his brothers-in-law in Texas to form a new corporation.  In Texas, his relatives owned about 30 Mexican restaurants known as El Chico.

“Uncle Luis and his brothers-in-law decided to merge,” Gonzalez said.  “Since it would be easier to rename the six Oklahoma City restaurants, the name El Chico was adopted for all of them.”

When Alvarado died in 1977, the family sold the chain to a large conglomerate.  El Chico restaurants continue to operate today—in name only—with one caveat.

“My family may have sold the business, but we kept the original recipes,” Gonzalez says.  “In 1981, my father opened Pepe’s in Edmond and then Laredo’s on NW 63rd Street in Oklahoma City.  We relocated to our current location in 2009 and rebranded as ‘Milagros.’  And we still offer many of those great dishes from El Charrito you can’t find anywhere else.”

Gonzalez said when his father died, his siblings took him to court, trying to force sale on Casa de los Milagros.

“I was determined to carry on my family’s legacy in Oklahoma City,” he says.  “It took some maneuvering, but my mom and I now own the restaurant outright. As we celebrate our 10th anniversary, we hope Oklahoma City will come back and give us a try.  El Charrito may be just a memory, but Milagro’s is still here, serving the great food our customers remember from so long ago.”