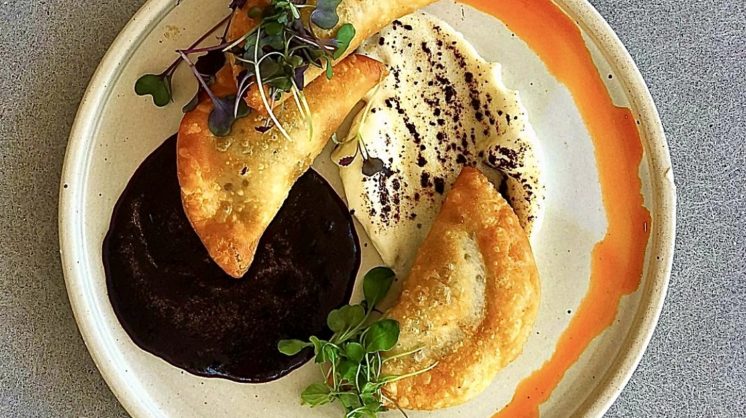 For the sake of definitions, we’ll admit that there is a difference between empanadas and other fried or baked meat pies. However, as far as taste buds are concerned, delicious pastry wrapped around spicy ground beef, shredded chicken, plantains or potatoes is good no matter what it’s called. Every distinct cultural cuisine seems to have some version of a meat pie: empanadas, pastelitos, pastelillos, bierocks, runzas, pasties, etc. — and that’s without getting into the gray area of Chinese xian bing. Is it a pie? Is it a dumpling? Yes. We’ve found some great choices around the metro for you to dive into these international staples, so here are 10 Empanadas (or not) to Try Now.

Carican Flavors, 2701 N. MLK Ave., OKC
In the Caribbean, they’re called Jamaican beef (or chicken) patties, so that’s how they’re listed on the menu at this Caribbean joint on the NE side. They’re a bit spicy, as good Jamaican food should be, but ask for hot sauce all the same.

Cous Cous Cafe, 6165 N. May Ave., OKC
Bastillas are a traditional Moroccan dish, and Cous Cous has a delicious chicken bastilla. Rather than a straightforward pastry-wrapped-around-meat approach, a bastilla features a layer of toasted ground almonds, and then it’s all topped with powdered sugar, for complex savory vs. sweet battles on your tastebuds.

El Fogon de Edgar, 7220 S. Western Ave., OKC
The popular Colombian spot on the south side serves the traditional Colombian empanada made with cornmeal. You can get them with beef, chicken or potatoes, but always get them with extra aji verde.

El Tarasco Taqueria, 2635 SW 29th St., OKC
Head over to SW 29th District for this very traditional take on Mexican empanadas. They’re much larger than you’d expect, but you’ll be determined to finish the chorizo empanada and wish you had room for a second.

Frida Southwest, 500 Paseo, OKC
Chef Quinn Carroll demonstrates how to take humble food and turn it into a fine dining dish with his short rib empanadas. They’re made with wild mushrooms, green chiles and goat cheese and finished with an ancho chile demi. We’re just glad they’ve never cycled off the menu.

The Fried Taco, 308 NW 10th St., OKC
The empanadas at this spot in The Collective are Puerto Rican style, with ground beef or chicken with chorizo and cheese. You can also get them mixed together, and we can’t find a single thing wrong with that idea.

Misasa Latin Grill, 3001 N. May Ave., OKC
Pastelitos Honduran style are what you’ll find at this N. May eatery. It has options, but get the chicken if it’s available.

Oodles of Noodles and Dumplings, 13325 N. MacArthur Blvd., OKC
Northern Chinese food is finally taking hold in the 405, and this NW OKC noodle house also has delicious xian bing. It’s “meat bun” on the menu, and even that is a little misleading if you’re thinking bun as in hamburger. The texture really is a cross between a dumpling and a meat pie, but you won’t care about labels once you try it.

Whipped Bakery Cafe, 3820 N. MacArthur Blvd., Warr Acres
One of the things Nebraska does right is runzas. The meat pies are typically served piping hot at Cornhusker games, which has been the only high point for that group of fans for several years now. Whipped sells out of them fast, so call ahead to make sure it has some available.