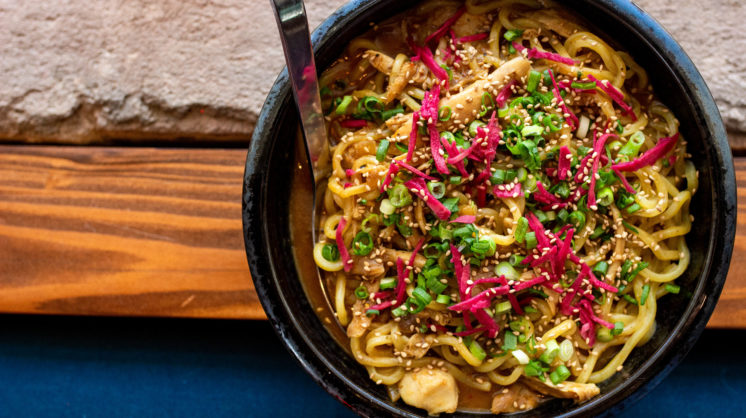 Photo of Mazemen Curry at Goro Ramen by Chelsey Cope

At its conceptual core, curry is gravy, which means it fits right into Oklahoma’s culinary landscape. (Just imagine it with biscuits.) The curries available in the 405 tend to fall into three broad categories based on region: the Indian subcontinent, Southeast Asia and the Caribbean. Each style uses different blends of spices, and proper Indian curry takes the longest to prepare, lending it a silkier, more rounded texture and flavor profile. Caribbean and Thai curries rely on fresh peppers rather than powders, and Thai especially leans on coconut milk for its most popular varieties. Finding them around the metro is easy, with Thai and Indian joints being the most common, but they all tend to be delicious. Here are 10 Curries You Need to Try Now.

Carican Flavors – This Caribbean spot is the best place in OKC to get Caribbean-style curried goat. Yes, goat, the most consumed animal protein in the world, which is flavorful without being gamey or pungent.

Chick N Beer – You can get wings with two different curries at this Uptown 23rd wing destination. The red curry is a mashup with a honey barbecue twist, and the yellow curry is a straightforward curry blend with a touch of sweetness.

Four J’s – The Southwest side, takeout-only concept was OKC’s first Lao restaurant, and it also offers Thai cuisine. The massaman curry is a mild Thai-style dish, with a lovely balance of tangy and savory notes.

Goro Ramen – Mazemen is a brothless noodle dish common in Japanese cuisine, and Goro prepares its with a house-made curry and confit chicken for a savory, mild dish that relies on pickled ginger to lighten it up.

Mt. Everest Cuisine – This Edmond spot also offers curried goat, but in a Nepalese style. Spice levels are relatively low, so it functions as a great introduction to this popular dish.

Panang Thai Restaurant – As the name suggests, the panang curry is excellent, and with four locations — including Moore — it’s convenient all over the metro. Panang is a relatively mild curry featuring basil, coconut milk and bright, green veggie flavors.

Sheesh Mahal – While it’s technically Pakistani food, the place is known as an Indian food destination; the cuisines are very similar. The green chicken masala is made with Sheesh Mahal’s own masala blend, with cilantro and garlic to make a rich, savory dish.

Tandoor – Popularly known as “truck stop Indian food,” this east side restaurant is tucked into a truck stop at Reno and MLK — but it also produces some of the city’s best curry dishes. Start with the chicken curry, and when they ask what heat level, know that the higher numbers should be approached judiciously.

Thai House – You’ll find tod mun pla (Thai fish cakes) on the appetizer section of this Uptown 23rd restaurant. The fish flavor is very mild, and it’s rounded out and made more earthy by the red curry paste at the heart of the spice blend.