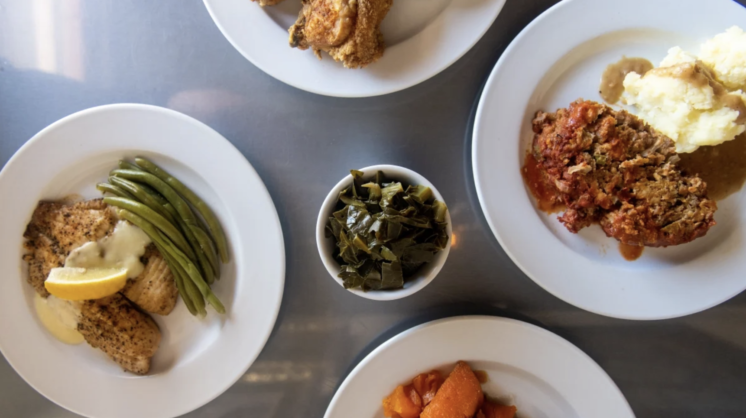 In recognition of the James Beard Award just announced for OKC landmark Florence’s Restaurant at 1437 NE 23rd St., we’re changing things up this week. For these 10 Things lists, we typically recommend dishes or drinks all over the 405, but because Florence Jones is Oklahoma’s first James Beard Award recipient, we’re featuring 10 Things You Should Eat at Florence’s Restaurant.

Pear Pie. This used to be a special, but it’s gotten so popular that it’s now on the daily menu. Flaky crust, ripe pears, perfect balance … and then a side of ice cream: perfection.

Yammed Fried Chicken. It’s unique as far as we know. Sweet potatoes in the dredge make it a delicious mess, but they do have napkins.

Fried Chicken. Jones is better known for her yammed fried chicken — it was Guy Fieri’s choice, after all — but the secret seasoning on the Southern fried chicken lifts this dish right out of normal into amazing.

Chicken Gizzards. It’s Southern cooking, so expect some things you probably don’t eat every day anymore. Growing up in Oklahoma with Depression-era grandparents meant many of us tried gizzards and/or liver at least once. Gizzards are the winner, always.

Catfish. Served nugget-style for easy eating, the catfish is fried perfectly, and the house-made tartar sauce is a tangy treat.

Neck Bones. When Guy Fieri walked around the restaurant asking everyone their favorites, turkey neck bones were mentioned more than any other dish — so often, in fact, that Fieri quipped, “Maybe we should have chosen the neck bones.” Yes, he should have, because they are magnificent.

Collard Greens. This is soul food, so if you don’t get the greens, why are you even in the building?

Salmon Croquettes. Another Okie favorite, though they tended to be called “salmon patties” around here. These are delicious, and they really are a nostalgic indulgence.

Pork Chops. The only difficulty here is choosing between fried or smothered. If you’re the healthy type, they’re also available grilled, but you’re not likely to be here to eat healthy.

Honey Meatloaf. It’s impossible to explain. They call it a family favorite, and — with apologies to your mom — it’s likely to be your family’s favorite too.