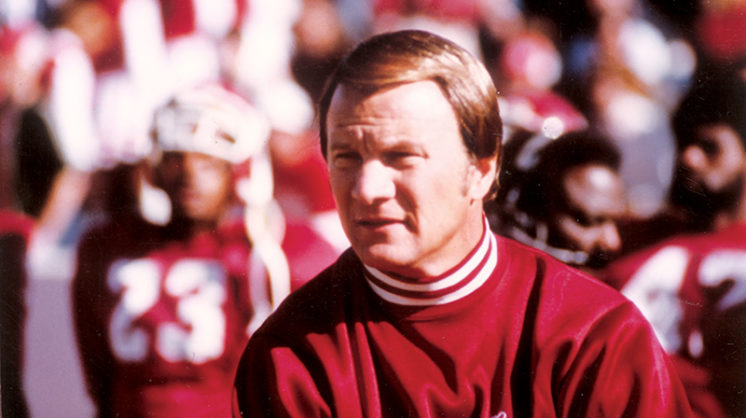 Oh Norman, can we count the ways we love thee? Actually, we can. From staples such as The Mont and The University of Oklahoma to newcomers like Das Boot Camp and Hurts, we came up with the top 23 reasons why Norman is the real capital of Oklahoma. Warning: if you eat, drink or watch Oklahoma football … this list may be too much awesomeness for you.

Three National Championships and a Super Bowl ring later, Barry Switzer is still one of the nicest, most approachable human beings on the planet. He’ll do anything for a good cause, and with the opportunity to live anywhere on the planet, he still chose a house on campus. He’s the King and loves Norman almost as much as we love him.

Predating statehood by 17 years with its founding in 1890, The University of Oklahoma now welcomes more than 30,000 students every fall. Easily Norman’s largest employer, the university is the center around which the city revolves. The school is ranked first in enrollment of national merit scholars … and then there’s the matter of the football team’s seven national championships (only three schools have more).

Since 1976, many a sorority sister (and frat brother, and student, and townie) has enjoyed a Sooner Swirl on The Mont’s famous patio. What they may not know is that the location dates back to the 1920s, when it was a Mexican restaurant known as The Monterrey. Locals referred to it simply as The Mont. Fun fact: The Mont was the first business in Norman to have air conditioning. These days, the mister on the patio is all you need to enjoy some pulled pork nachos or queso.

The University of Oklahoma’s Chrysanthemum Gardens in full bloom are a photographer’s dream. Typically, more than 15,000 mums and 5,000 small Joseph’s Coat plants dress up the South Oval during any homecoming week. Take mom and enjoy the beauty that is OU’s campus. 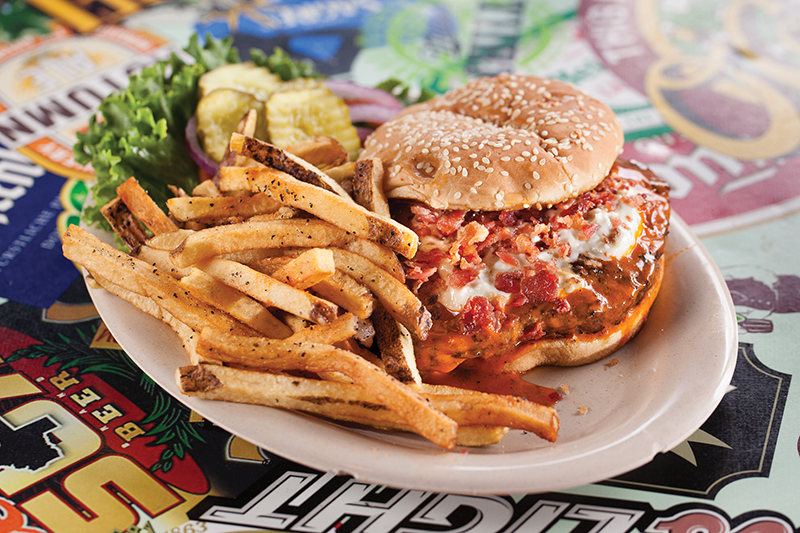 It’s home to burgers and beer every day, but St. Patrick’s Day at O’Connell’s is a Norman tradition with owner Jeff Stewart kicking off the day at 7 a.m., serving the state’s biggest green-eggs-and-ham breakfast along with non-stop green beer. Many come before work just to get their souvenir glass stein and T-shirt. 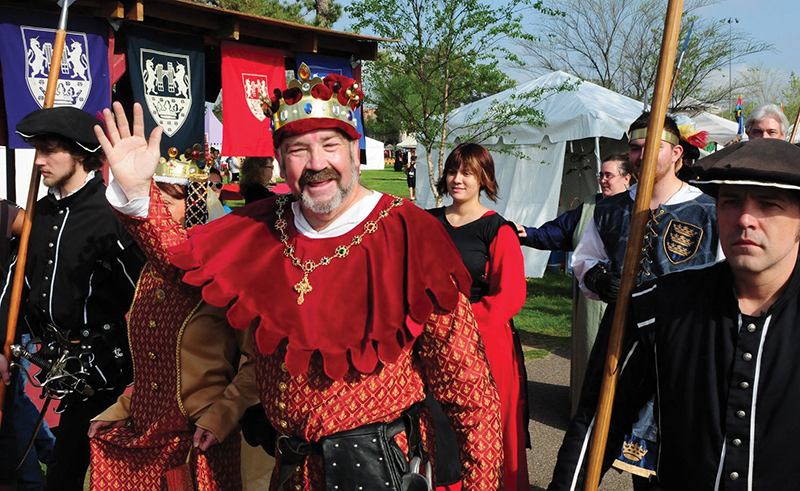 For 39 years, The Medieval Fair has been bringing lords, ladies and serfs to Norman in April. It’s corsets, chain mail and turkey legs during the state’s largest weekend event – drawing 300,000 annually.

The Norman Arts and Humanities Council has helped Jazz in June become a summer staple in Norman, drawing top-tier musical performers for 32 years now. The three-day event brings crowds in excess of 50,000 to Brookhaven Village and Andrews Park; grab a lawn chair and join the throng.

Shrines to all that is Sooner Football – from Mex the Dog to Bob Stoops and everything in between, the Legends Lobby is three stories of memorabilia, each a piece of OU football history. And across the street in Heisman Park, Oklahoma’s five Heisman Trophy winners – Billy Vessels, Billy Sims, Steve Owens, Jason White and Sam Bradford – are immortalized in life-size bronze statues as they are in the hearts of Sooner fans everywhere. Take an afternoon and explore; it’s worth it.

The headquarters of the National Weather Service is actually somewhere in Maryland, but residents claim Norman as the epicenter of national forecasting by proximity to epic weather alone. After years on OU’s North Base, university President David Boren brought the NWC to the campus proper in a state-of-the-art facility. Even Gary England has signed on as the school’s meteorologist-in-residence, further strengthening Norman’s claim to national weather dominance.

OK, maybe it’s been called “Lake Dirty Bird” and it changes colors a couple of times a year when the red clay bottom turns over, but it’s close, it’s big enough and it’s ours. Fishing, swimming, skiing and wakeboarding – you can do it all at Lake Thunderbird. Go ahead and drag your boat along the interstate three hours each way to Tenkiller or Texoma if you want, but we’d rather spend that time on the water. 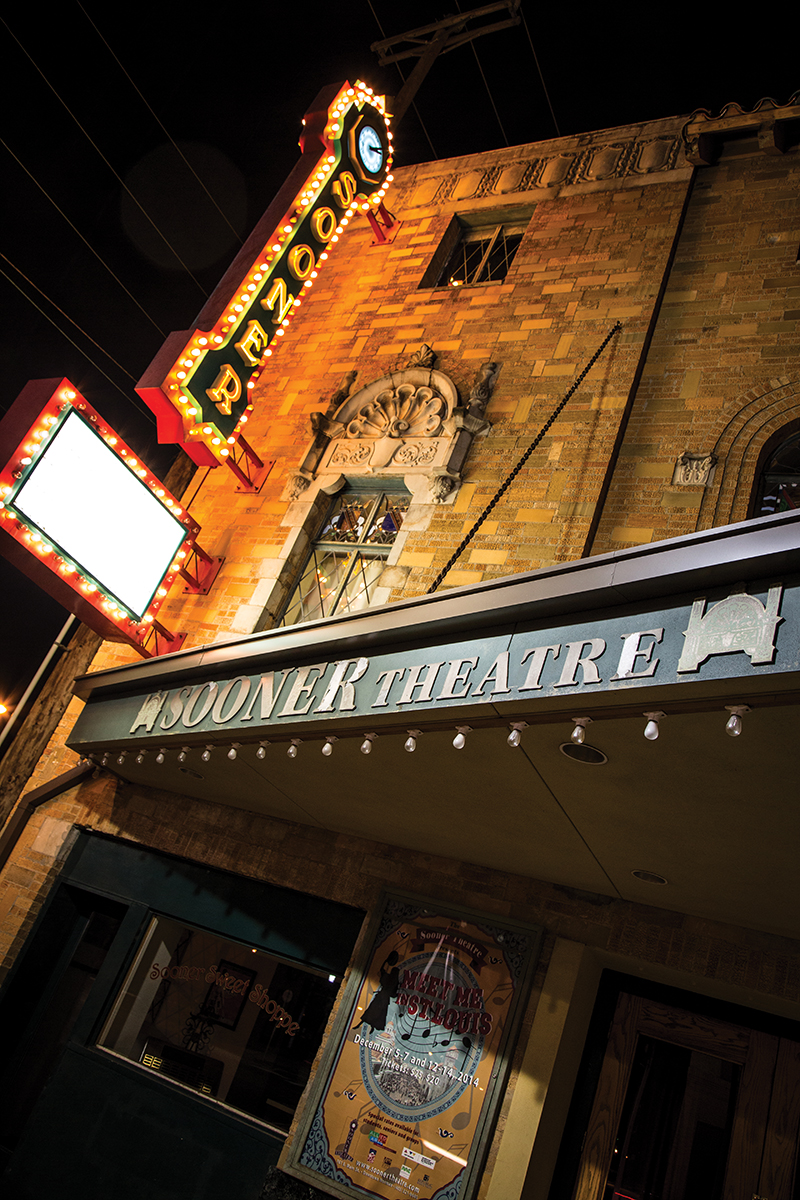 Built in 1929 in the Spanish Gothic style by architect Harold Gimeno (an OU architecture professor), this Main Street structure has been listed on the National Register of Historic Places since 1978. Longtime Norman residents still remember going to movies at the Sooner Theatre, which helped usher in the era of “talking pictures.” Today, it plays host to various performing arts, including live theater, concerts and dance. 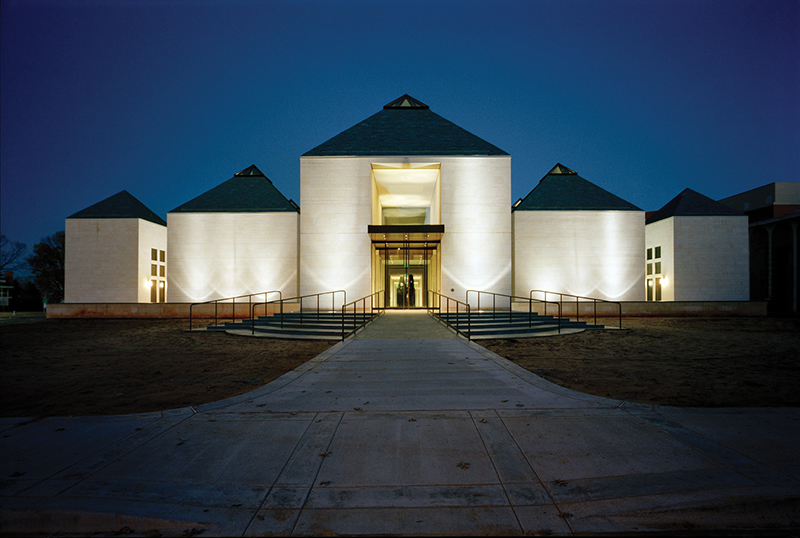 Ever since Oscar B. Jacobson – the director of the OU School of Art in the 1920s – began collecting art for the university, the museum has been growing. Named in honor of an OU senior who died in a plane crash, its immense collection now includes works by Degas, Monet and Van Gogh, and American and Native American artists are also prominently displayed – all free for visitors to see, thanks to an annual $60,000 gift from the OU Athletics Department. 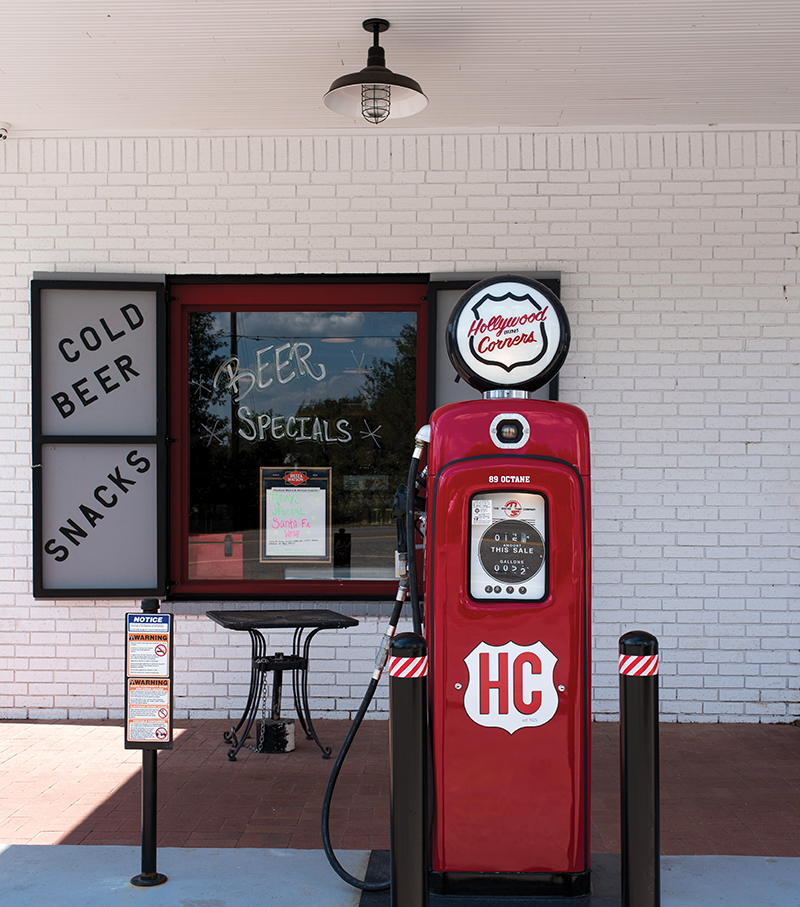 When this 1920s gas station along rural N Porter recently closed, most figured it was the end of an era. Rumored to be actor James Garner’s first job, Hollywood Corners wasn’t shuttered for long. Toby Keith – who literally lives just down the street – is not only reopening the station, but also bringing in Norman’s beloved Midway Grocery & Market to run the deli this fall. You’ve got to try Bill’s butcher-style chili. 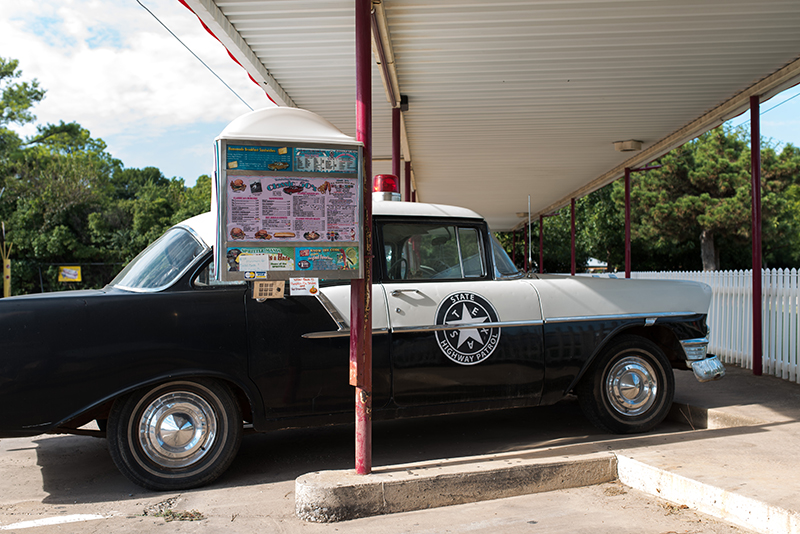 Not even Sonic moving in next door could take down the Lindsey Street icon operated by father-son duo Juel and Tim Sweatte. For nearly 60 years, Classics has served Pickle-Os, Cajun fries, burgers and potato boats. Happy Hour (twice daily) at Classics means fresh fruit slushes, Eskimo Frosties and Sprittles (Sprite plus Skittles). This Norman fixture has also donated more than $500,000 to local causes.

There’s a newer location on OKC’s southside, but for Normanites, the original Victoria’s on White will always be the best. The open-kitchen operation is a simple one that focuses not on fanciness but quality, stick-to-your-ribs pasta and plenty of it. Try the Best of Victoria’s with primavera, linguini or the rotating daily pesto. Or spring for the shrimp lasagna roll. Don’t forget the cheese bread and alfredo sauce.

There’s no dine-in option and a 95-percent chance your delivery driver is either A) in college, B) has a tattoo or piercing, or C) all of the above, but these places have served among the best, inexpensive pizza in Norman for the past 25 years. Three locations (make sure you know which you’re calling) serve up pizzas, subs and even wings. Try the turkey, bacon and Swiss sub and ask for the oil. We know a few people who survived college on Pizza Shuttle alone. 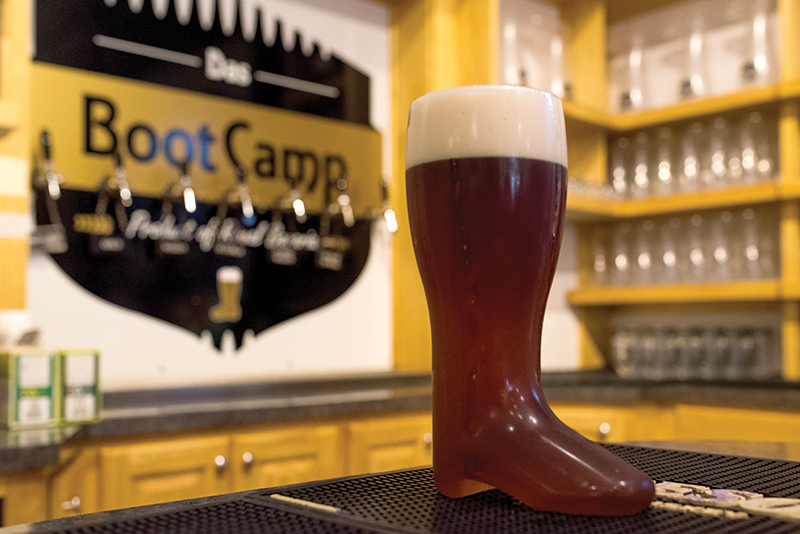 Thank you, Moore, for the German delicacy that is Das Boot Camp. The owners of Moore’s Royal Bavaria got so tired of people asking for a restaurant in Norman that they put a spinoff smack in the middle of downtown. German specialties made from scratch, incredibly good handmade beers and everything on the menu is under $10. Das is good. 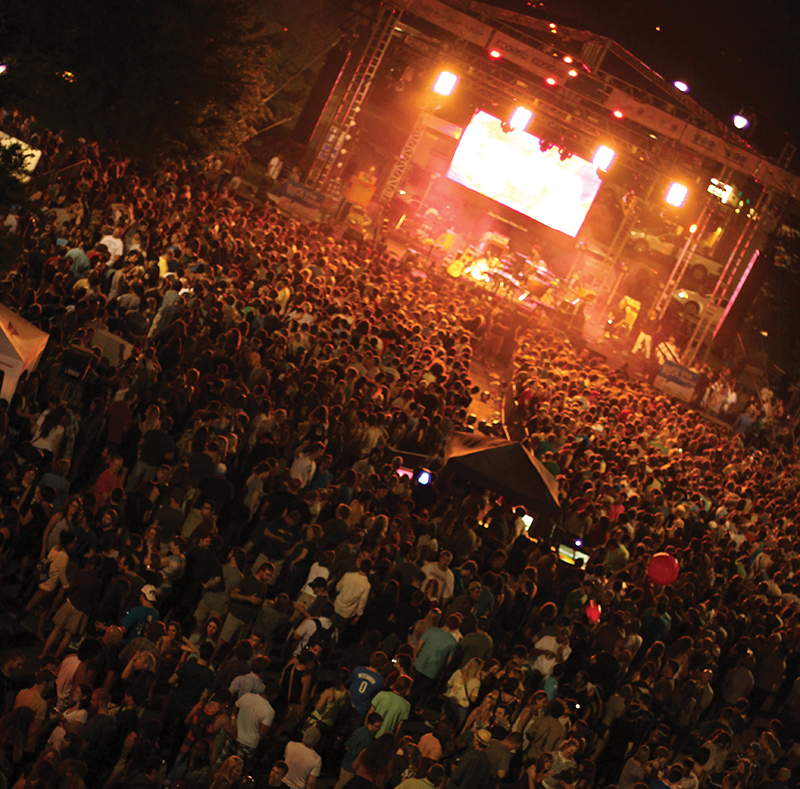 Since 2008, NMF has grown from a one- to three-day event featuring several different music genres, all free to the public. Imagine more than 300 performers from some of the best Indie bands in the nation, and the Norman Music Festival is what you get.

Norman’s Hurts location is barely 2 years old, but it has collectively blown our donut minds. Campus quickly welcomed this 24/7 donut phenomenon that features creations you never even thought possible, such as Oreo Cheesecake, bacon donuts – even donut milkshakes. Plus it’s a stone’s throw from Victoria’s if you haven’t gotten your carb fill just yet.

Normanites will remember how Classic 50’s helped raise funds for this endeavor for seemingly forever with those dinosaur cups … and boy, was it worth it. Natural and cultural history dating back 4 billion years is featured in engaging detail in this mammoth (pun intended), award-winning museum. 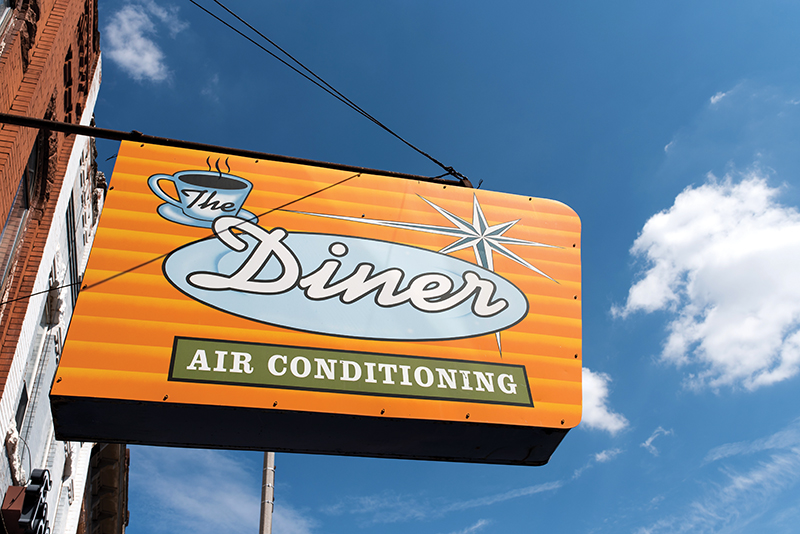 This ’50s-style diner has twice been featured on the Food Network. Seating is first come, first served, and a line snakes out along E Main each Saturday and Sunday morning waiting for one of the prized 50 seats. Get a kitchen sink omelette or tamale breakfast. Amspacher family, our cardiologist would like a word, but we can’t quit you.

It’s called Norman’s only five-star dive for a reason. Located on historic Campus Corner, The Deli is Norman’s only seven-day-a-week live music venue, and smoking is allowed. Catch a show by the Tequila Songbirds or Mike Hosty.

The Firehouse Art Center holds its annual fundraiser and membership drive only once each year, and it’s coated in chocolate. The festival has been ranked third among food festivals in the U.S. by Food Network and featured in both Southern Living and Bon Appetit. One ticket unleashes you on samples of the best chocolate creations Norman restaurants can offer.

It’s neither the biggest nor the newest mall in Oklahoma, but Sooner Mall has been Norman’s go-to shopping destination since 1976 when it was Sooner Fashion Mall. And as far as Normanites are concerned, why would you want to drive to one of the “big” malls in OKC and fight for parking? 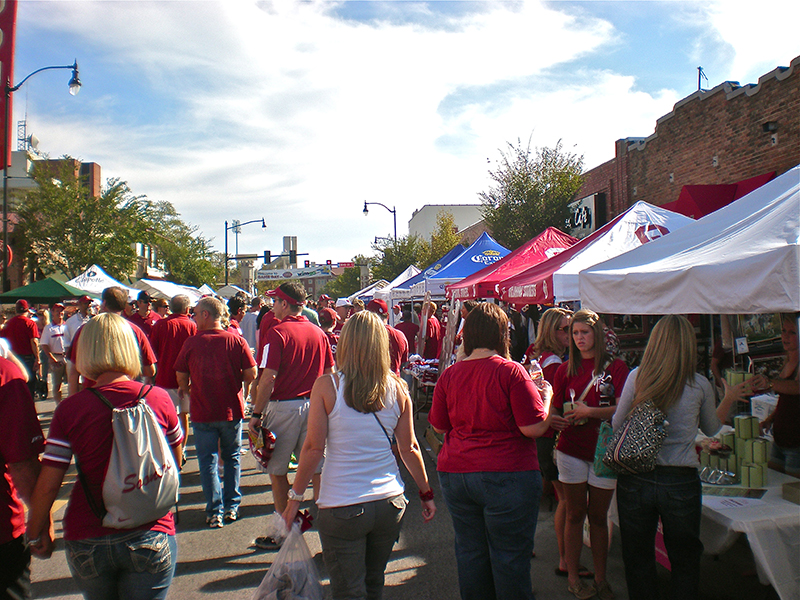 RVs begin pulling onto campus days before kickoff to stake out the prime tailgating real estate. All those national championships and top-tier competitors have created a Sooner Nation that loves to not just talk football, but eat and drink it too, for as many hours as possible before and after kickoff. 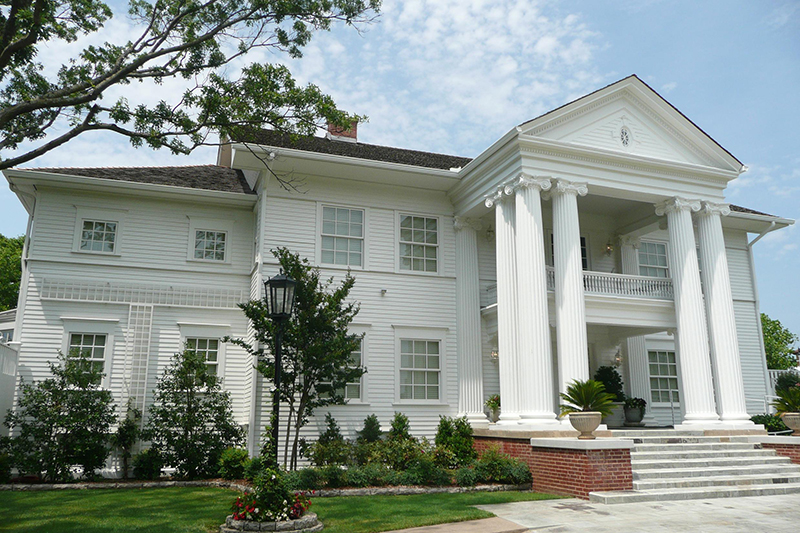 Call it The President’s House or the OU White House, this stately-looking domicile has served as the residence of OU’s president since it was built in 1906 by OU’s first head, David Ross Boyd. In 1976, the house was added to the National Register of Historic Places. David and Molly Boren have called it home since November 1996.

All that studying works up a college-sized hunger and thirst. Quench both at Othello’s. This family campus haunt with classic Italian recipes and full bar has long been a favorite of students, professors and the likes of the King himself. There’s also trivia, comedy, piano and live music throughout the week.

How Doug Kennon and family have transformed this old chain hotel situated along I-35 is nothing short of amazing. Each room is themed with memorabilia and decorations of individual OU players and coaches past, and they’re all generally full Friday nights before home games. The Crimson and Cream theme continues through the attached restaurant and bar. 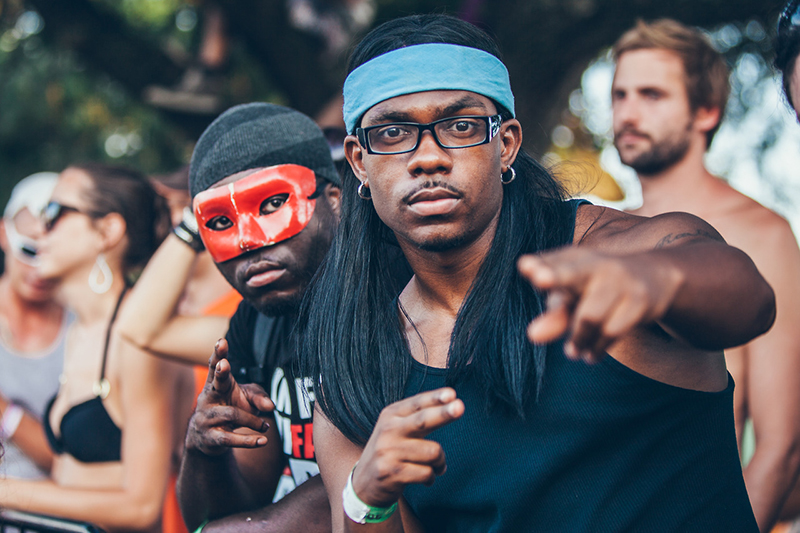 Opolis bills itself as a bar and micro venue, but concentrate on the eclectic music offerings. You might catch Seattle-based, indie garage punk trio Shannon and the Clams one night and then independent rap artist Turquoise Jeep another. We don’t know who these people are either, but Opolis provides a solid venue to check them out – and your new favorite discovery could be warming up the amps any night.

In July of 1984, the Buthion family introduced Norman to European breads and pastries. La Baguette’s croissants and crepes had guests wanting more, and the establishment began offering a fine dining experience. Today, La Baguette has two locations in Norman (one in OKC) and a separate commercial bakery that supplies a number of local establishments with artisanal creations.