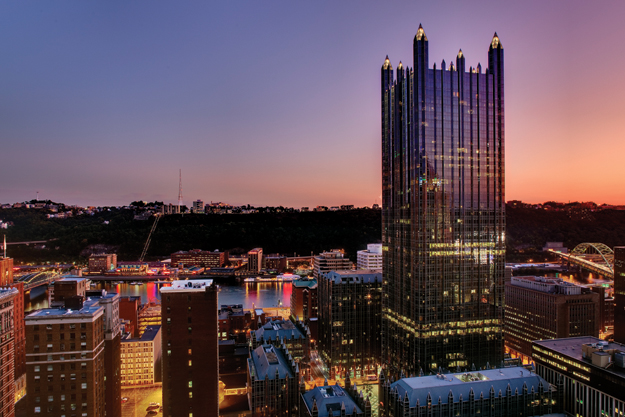 The sky is blue; the city is green. Pittsburgh, once infamous for steel mills with smokestacks belching smog and smut, has transformed itself as it transitioned away from an industry-based economy.

The minute I got to my room in the Fairmont Hotel, I pulled back the curtains to check the view. Floor-to-ceiling windows looked out on a varied cityscape – from the 1784 Market Square and turn-of-the-last-century skyscrapers to the mirrored spires and pinnacles of the late 20th-century PPG Place, a collection of buildings reminiscent of Superman’s home on Krypton or the Ice Queen’s palace. Glimpses of the Monongahela River teased between the structures. I couldn’t wait to take to the streets to explore.

I’d been on planes all morning and I was hungry. Heading for Market Square, I spotted several possibilities. In a corner of the Square was a nondescript little building sporting a plaque. Going closer, I read, “Site of Bear Tavern 1827 Oyster House 1871-1971.” It’s still open, with just the fifth owner since 1871, and they still serve great oyster and fish sandwiches. I’d stumbled into Pittsburgh’s oldest bar – at 141, it was already a classic when Oklahoma became a state. And Market Square became one of my new favorite spots in one of my new favorite cities in the world.

Downtown Pittsburgh is squeezed into a triangle created by the Allegheny and Monongahela Rivers. The rivers lose their identities in their union to become the great Ohio. A walk through downtown Pittsburgh provides a tour of the art and architecture of the 19th, 20th and 21st centuries. Art works include stone, metal, glass, ceramics and murals and range from classical – like the 1888 lions at the iconic H.H. Richardson-designed Allegheny County Courthouse – and abstract, to comical and magical, i.e. Tony Tasset’s 2006 “Magnolias for Pittsburgh” – two bronze trees bearing approximately 800 hand-painted petals.

As impressive as the newer buildings are with their sleek design and shiny facades, Pittsburgh’s classic oldsters were most appealing to me. Up Liberty Street I stopped at Trinity Cathedral (1870-’72) and the English Gothic First Presbyterian Church (1903-05). Farther along this street are office buildings in styles from Italianate and Queen Anne to Richardsonian Romanesque and Classical Revival. In the midst of these beautiful old structures, a huge Brian Holderman (2006) mural in bright colors depicts a fanciful blend of the city’s past and future.

Pittsburgh needs to be viewed by pedestrians who have time to look up at the amazing ornamentation on some of the buildings – and who can walk inside to see details carefully crafted by artisans of an earlier day. The wedding-cake style of the Flemish/ Gothic Union Trust building was enticing, and the interior with its massive stained-glass skylight begged to be photographed. Entering the City-County Building on Grant Street, I admired the fish-scaled tile vaulting before going into the grand public corridor. Wow! They just don’t make buildings like that anymore.

Here’s what they are building in Pittsburgh these days: some of the most environmentally friendly, sustainable structures imaginable. My hotel – the Fairmont – is LEED Gold Certified. From start to finish, care was taken to ensure the highest standards possible. Ninety-nine percent of the waste accumulated during construction was recycled; products used were chosen for safety and sustainability and even shipping distances for items were calculated. But there’s nothing Birkenstocky-looking about the results. The Fairmont’s elegance and amenities earned it a 2012 AAA Four Diamond rating.

A highlight of the visit was a tour of the newly-opened Center for Sustainable Landscapes at the Phipps Conservatory and Botanical Garden. This building was planned to exceed requirements for LEED Platinum Certification by achieving net-zero energy consumption and water use. The architects and engineers have created a beautiful and useful space that sits as lightly as possible on the earth. And it harmonizes with both the site and the existing structures, including the original 1893 conservatory.

Pittsburgh boasts over three dozen LEED Certified buildings, including the world’s first LEED Certified (Gold) convention center. Construction is underway on the 30-plus story Tower at PNC Plaza, designed to be the world’s greenest skyrise.

City of the Future – and the Past

While Pittsburgh recreates itself as a city of the future, it has retained the flavors of its various small neighborhoods. One of the coolest areas is The Strip, a market district where you can chow down on the iconic Primanti sandwich – pastrami topped with slaw, tomatoes and French fries on Italian bread, a grab-and-go favorite of working Joes. At Pamela’s, I partook of presidential pancakes – crepe-like creations which are a favorite of President Obama.

All around town you’ll see things named for past Pittsburghers who helped build some of America’s biggest industries – names like Carnegie, Mellon, Frick and Phipps. No visitor should miss the Carnegie Museums; the Museum of Art; Natural History; Science Center and the Andy Warhol Museum.

Sports fans love the city, too. It offers major league baseball, football and hockey. The CONSOL Energy Center is the first LEED Certified arena in the National Hockey League.

For all its big city busy-ness, I found locals to be among the friendliest and most helpful folks I’ve met in my travels. I shared tables with strangers for al fresco lunches in Market Square. And a shop-owner (Nick Mancini of Mancini’s Bakery) turned his store over to an assistant to take me up the street and show me where his great-grandfather once owned a bakery. I thought we were friendly here in Oklahoma, but these people took hospitality to new heights.

Pittsburgh, once the pollution poster child, has grown into a shining example of progress at its best. And in my book, it’s a blue-ribbon destination.