A Champion of Chicken - 405 Magazine 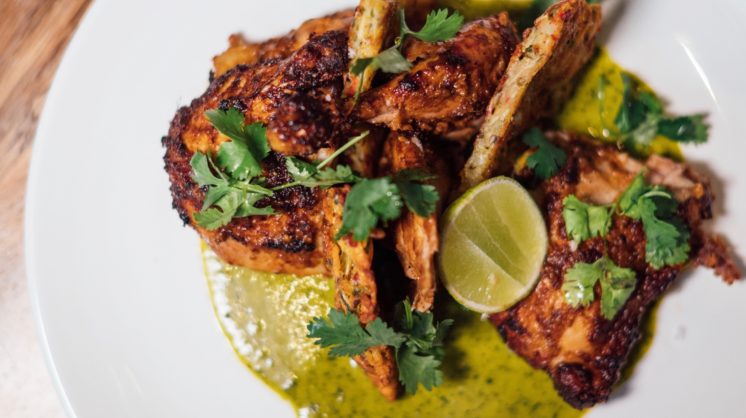 Jones Assembly is the casa for pollo a la brasa.

The association of pollo a la brasa with Peru is so strong that people often believe the roasted chicken dish has roots deep in the country’s culture and history. In fact, it was introduced in Lima, Peru, in the 1950s by Swiss immigrants — but that didn’t stop the locals from fully embracing this richly satisfying comfort food, including designating a day in its honor.

The dish was originally just a roasted chicken with a rub of local spices, but co-creator Franz Ulrich, who had a knack for mechanical equipment, constructed a version of what we now know as a rotisserie to roast the birds. In very short order, competitors started developing their own versions, so there is no longer a single version of pollo a la brasa; it varies from region to region and restaurant to restaurant.

Chef David Gilbert of The Social Order Dining Collective has added his own version of Peruvian chicken to the menu at The Jones Assembly at 901 W. Sheridan Ave., serving what may well be an improvement of an already stellar, traditional dish. After spending a couple weeks in Peru earlier in 2022, he got inspired to apply his skills and background — which includes a James Beard nomination — to a dish he already loved.

“We brine the chicken for 24 hours, and then marinate it another 24,” Gilbert said. “It’s then rubbed with an herb paste and roasted over pecan and oak wood.”

The pecan and oak are a departure from the use of charcoal in Peru, but help to localize the dish. If it were only the half chicken on the plate, it would still be worth a trip to The Jones, but Gilbert again departs from tradition by adding not French fries but yucca cakes. Think of them as the world’s greatest tater tots combined with the world’s greatest potato cakes.

“We grate two parts yucca to two parts potatoes — it’s a Peruvian dish, after all — and add a mixture of herbs and red chilis and pan-fry the cakes,” Gilbert said.

To finish it off, he also adds a house-made aji verde as the base. The chimichurri-like sauce is a mixture of aji amarillo chilis, herbs and garlic. There is enough on the plate to use it for a sauce for anything else on the table, and that’s a very unsubtle pro tip. (It was delicious on the halibut, too.)

The dish is only on the dinner menu for now, as Gilbert and his team are still working on the brunch menu. It’s plenty of food for two people, and frankly, it’s one of the best dinner options in the 405.