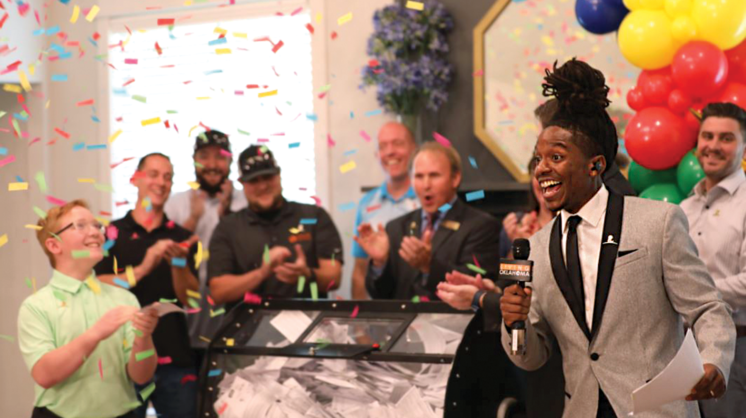 Courtesy of the Oklahoma ALSAC/Fox25

In the 1930s, entertainer Danny Thomas did not know where else to turn. Struggling to find work, Thomas attended mass one evening in Detroit, and prayed for guidance over looming medical bills. The next day, he was offered a small role that paid him more than he had given the church, according to the St. Jude Children’s Research Hospital website.

Later, amid further career troubles, he turned to St. Jude Thaddeus, the patron saint of desperate cases and lost causes. St. Jude’s name is often invoked in prayer by those suffering from unemployment, financial strain or disease. After praying to the saint, his career exploded, culminating in an Emmy Award; however, he never forgot the promise he made.

Thomas had a dream that “no child should die in the dawn of life,” and on Feb. 4, 1962, St. Jude Children’s Research Hospital officially opened its doors. Since then, research into childhood cancer has advanced tremendously, and St. Jude’s efforts are part of the rise in children’s cancer survival rates. “It is the only National Cancer Institute-designated Comprehensive Cancer Center devoted solely to children,” said Chassidy Satterfield, the area executive director for St. Jude in Oklahoma. “Treatments invented at St. Jude have helped push the overall childhood cancer survival rate from 20% to more than 80% since the hospital opened more than 50 years ago.”

There are eight affiliate clinics across the U.S., including one in Tulsa, and regional fundraising offices in all 50 states and Washington, D.C. In addition to cancer research, St. Jude Children’s Hospital removes the burden of travel, housing and treatment costs to families so they can focus on their children. Volunteers and donations are what make this possible.

On Aug. 25, St. Jude Children’s Research Hospital announced the 2022 winner of the annual St. Jude Dream Home Giveaway for Oklahoma City. This year’s winner received a 2,700-square-foot home worth an estimated $580,000 built by Shaw Homes, which has donated its services for the last three years, with another commitment in 2023. Additional sponsors include The Oklahoman, 101.9 the Twister, Bob Moore Auto Group and Homeland.

“We have given away nearly 600 homes in 19 states and 44 markets nationwide, and have raised over $550 million,” said Satterfield. “People can win the house and other prizes by reserving a $100 ticket. Those who toured the Dream Home could also sign up to win our Open House prize: a $5,000 shopping spree courtesy of Mathis Brothers. All proceeds will help ensure that families never receive a bill from St. Jude for treatment, travel, housing or food — because all a family should worry about is helping their child live.”

Giveaways like this fund St. Jude’s strategic plan: a six-year, $11.5 billion investment to help raise survival rates of the six most common forms of childhood cancer from 20% to 30% by 2030. “The plan is ambitious, and its goals are far-reaching,” said James Downing, the president and CEO of the hospital. “We’re committing substantial resources to broaden scientific understanding, raise survival rates, improve quality of life and connect researchers worldwide in the quest to find cures and save children with cancer and other deadly diseases.”