A Home for All Seasons - 405 Magazine 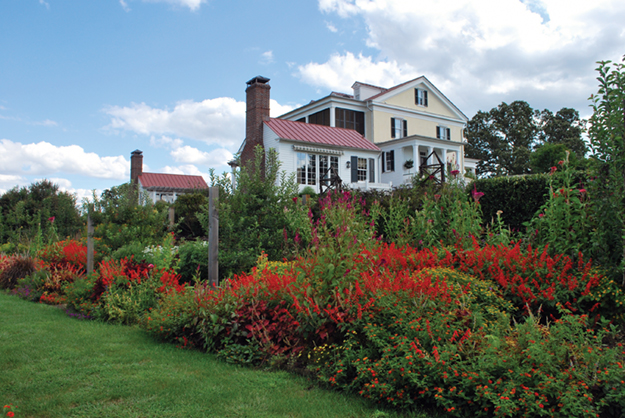 Here’s the closest I can get to describing P. Allen Smith: He’s Martha Stewart without the prison record. He cooks, he gardens, he decorates, he paints and he raises heritage chickens. He looks like the ideal kid brother, with a winning smile and friendly demeanor, and he makes everything look easy.

The TV host and expert on gardening and design lives at Moss Mountain Farm, 30 minutes northeast of Little Rock, covering 600+ acres and including a mile and a half of Arkansas River frontage. His house looks like it’s been sitting there for over a century, but it’s actually only six years old – before building, Smith made a careful study of 1830s and 1840s farm homes within a 150-mile radius, taking into account room proportions, window casings and other details. Within this historically correct framework, he incorporated a number of green features, including a radiant solar roof and soybean-based insulation, into the construction.

Both the exterior and interior reflect the Greek Revival style. Smith collects Southern-made furniture from the early 19th century, and many of the pieces in his home reflect that passion. The art on the walls is eclectic – some old English works, some pieces by Southern artists and a number of paintings by Smith himself. Spacious coffee tables are stacked with books reflecting his many interests.

The gleaming kitchen is ready for serious cooking: It houses a huge Viking range with double ovens, six burners and an ample griddle. A large island and generous counter space allow plenty of room for preparation – it’s a perfect work area, if you can keep from looking out the large windows at the view instead of concentrating on food.

Smith graciously allows visitors to explore his whole house, to enjoy the flower and vegetable gardens and even to have lunch along with their tour. If he’s not off filming one of his shows, he’s apt to lead the tour himself.

The grounds are as amazing as the house. Several huge oak trees dot the property; the largest, in front of the house, is called “Big Sister” and is estimated to be 350 years old.

In spring, the rolling landscape glows with brilliant yellow daffodils – now about 300,000 of them. Smith and his staff plant more every year. In summer, the gardens explode into a rainbow of color – purple liatris, bronze and yellow day lilies, white daisies with buttery centers – every color and flower that will grow in Arkansas is probably right here! An acre-spanning vegetable patch and stone fruit garden supply a wide variety of vegetables, herbs and fruits used on the farm. Fall brings new hues with salvia, sage and colorful chrysanthemums, and the house takes on a holiday look. Lots of work? Yes. Does Smith do it all himself? Of course not. But there’s not a garden task that he isn’t more than qualified to perform. He grew up on a farm, owned and operated a garden center and has amassed impeccable formal landscape training. Though completely down-to-earth, he’s a certified fellow of Britain’s Royal Horticultural Society – veddy, veddy classy.

While a graduate student in garden design and history at the University of Manchester in England, he became acquainted with Lord and Lady Ashbrook, whose Cheshire estate has been in the family since the 1400s and includes the family seat of Arley Hall. Smith’s rose garden, a classic space with an ornate iron gate, is dedicated to Lady Elizabeth Ashbrook. In spite of the English connection, the majority of the Moss Mountain roses are Noisettes – the first American class of roses, bred in Charleston in the early 1800s.

In addition to classic American plants, Smith promotes the breeding of heritage sheep and poultry. His love of chickens goes back to his childhood, as he demonstrates when regaling visitors with the story of his first bird. “I was about nine,” he says, “and I was in downtown McMinn-ville, Tennessee, with my mom … and there was a little chicken running loose. Some men were whittling on the sidewalk and I asked them who the chicken belonged to. They didn’t know, but said it had fallen off a truck and if I could catch it, it could be mine.

“I got a hot dog bun from a nearby five-and-dime and laid a trail for the chicken. It was in front of the open door to a women’s store when I lunged for it. The chicken flew into the store … and under the door of a dressing room. I dived in. All I could see was bare ankles and the little brown hen huddled in the corner. I grabbed it – and I never looked up!”

In 2009, Smith founded the Heritage Poultry Conservancy to promote and preserve threatened strains of domestic poultry through education, good breeding practices and stewardship. He raises several breeds of heritage poultry on his farm, including Buff Orpington chickens, Sebastopol geese and black turkeys.

Visitors can tour Moss Mountain Farm either on an Open House day or with a privately scheduled group. The tour of the farm includes the house and terraced gardens, and a wonderful lunch. If Smith himself is in attendance, there are opportunities for photos and book signings. The gift shop is a treasure and a pleasure at all times. Be aware, though, that no tours are given during the months of January, February, July and August. You’ll find everything you need to know at pallensmith.com.

Whether you visit in person or by television, whatever the season, Moss Mountain Farm is a delight. And so is P. Allen Smith.