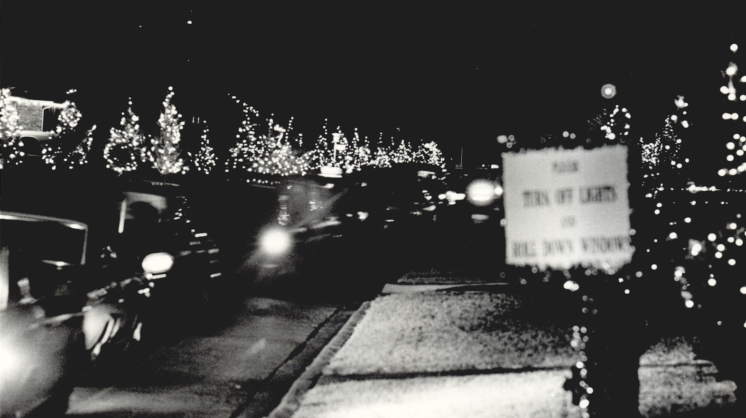 Most Oklahomans of a certain age will remember the Lakehurst neighborhood on north May Avenue as the place to be for Christmas lighting displays in the 1960s. The first houses had been built in 1961, and the addition was still relatively new. Residents got into the spirit of the holiday with the most glorious displays, and each street had its own theme. Landsdowne Lane, for example, might be all Santas and reindeer, while a couple of streets over, Pelham Court was decked out with elves, snowmen and candy canes. Lakehurst at Christmas was always a big deal. Oklahoma City’s finest would often block May Avenue between Britton and Grand to allow the steady stream of nightly traffic, while signs urged drivers to “please turn off your lights.” The traffic in and out of the neighborhood was bumper-to-bumper.

As a kid growing up in a small town, coming into Oklahoma City to see Lakehurst’s lights was one of the best parts of the entire holiday season. The other highlight was going to see Santa at Edmond Plaza TG&Y.

When Mom and Dad split in the summer of 1969, things got rough. Mom traded her beautiful 1966 charcoal gray Jackie Cooper Oldsmobile for a 1953 Ford with no heater. As a single mother making $1.50 an hour working in a factory, she did her best to make that final Christmas of the 1960s memorable and fun.

For starters, I got an early Christmas present when she surprised me with a new puppy – a spunky little black and white Jack Russell terrier. We instantly became BFFs. I named him “Snopsee.” I still don’t know where that name came from. But looking back, it could have been from my parents’ 1960s after-dinner beverage-of-choice, Peppermint Schnapps.

One cold December night, Mom, Snopsee and I climbed into that clunky old Ford with no heater. Mom had some quilts in the car she used to keep warm on her way to work. She and Snopsee and I snuggled under the quilts and started on our journey toward May Avenue. Next stop – Lakehurst!

We got as far as Edmond Road, or NW 178th as it’s called now, and all three of us could see the steam from our breath in that bitterly cold old car. “It sure is cold,” Mom said. “Are you sure you want to keep going?” As much as Snopsee and I wanted to see Lakehurst, he and I both agreed it was just too cold. So, we made a U-turn and headed back home toward Cashion. “When it warms up, we’ll go to the Plaza (which is what we called TG&Y) and you can sit on Santa’s lap and tell him what you want for Christmas,” Mom said.

The next Saturday, that’s what we did (though Snopsee couldn’t make it). My stupid 1960s flat top haircut had finally grown out into bangs. I put on my cousin Tony’s hand-me-down green plaid coat for a trip to Edmond and my photo with that jolly old elf.Santa had set up a temporary North Pole in TG&Y’s garden center, and I couldn’t wait to give him a hug. After all, he had always been one of my favorite people. I’d been mostly good that year, and I felt confident he would grant most of my wish list. “I want a Slinky, and a new Viewmaster, and some Klackers,” I whispered. “And bring my Mom and Snopsee something nice, too.”

Looking back on the final Christmas of the 1960s, I didn’t get to see Lakehurst’s lights. But I got a puppy and got to see Mr. Claus at TG&Y. Mom and Santa both did good.