A Recipe for Delectable Lamb - 405 Magazine 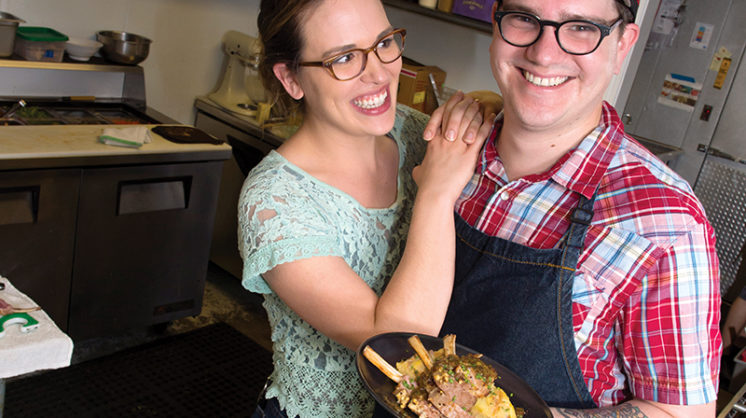 Taylor Desjarlais is the chef de cuisine at Chae: Modern Korean, but his beginnings in the food industry were not auspicious. His first job was at a now defunct restaurant in Lawton called Lone Star Steakhouse.

The restaurant still needed help, though, so they put the future chef to work in kitchen prep. That was the first step in a long process that led to Chef Kurt Fleischfresser’s apprenticeship program.

Desjarlais grew up like many Oklahoma kids, with casseroles, sandwiches and the occasional “breakfast for supper.” He still counts his mother’s chicken tetrazzini as his childhood favorite, as well as nachos – so many chefs are junk food devotees.

“I’m a Red Sox guy all the way,” Desjarlais says. “I would get written out of so many wills on my father’s side of the family if I chose any other team.”

When he does get to cook at home, he and his wife Hunter – who manages the front of house at Chae – like lamb. Specifically, Colorado lamb. Desjarlais said the protein is very underutilized by home cooks.

“I think a lot of people are afraid of it, thinking it’s too complicated,” he says. “This recipe is really straightforward and should make it very easy to cook.”

For this month’s recipe, the chef chose mustard-crusted rack of lamb and smashed fingerling potatoes, thereby combining a meat-and-potatoes simplicity with a little chef-y flair. The good news is that the crust for this recipe is super easy for non-professionals.

• Salt and pepper to taste

• Put the barley and yellow mustard seeds in water in the fridge overnight to hydrate.

• Strain the mixture and add the other ingredients to a stand mixer with the paddle attachment and whip until homogenous.

• Sear the lamb on all sides and let rest.

• Spread the crust on about 1/4 inch thick. Tip: You can also roll it out evenly between two pieces of parchment paper and cut into a block the size of your rack of lamb. The reason this crust works so well is because it comes out like a paste so it’s easier to put on the meat.

• Press the crust on and bake at 375°F to desired temperature. The crust turns into a shell and will not burn easily. When the crust is golden brown, the lamb should be done (medium temperature). 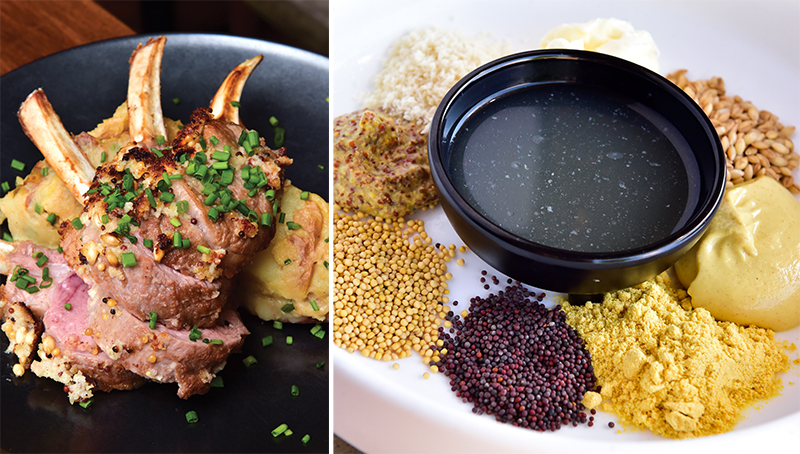 • 2-4 tbsp creme fraiche (depending on how creamy you prefer)

• Salt and pepper to taste

• Roast the potatoes with olive oil, salt and pepper until you can run a skewer through one with no resistance. While you wait, mix chives, creme fraiche and vinegar in a bowl. Smash each potato with the bottom of a jar and mix in the sauce while warm.