A Recipe for Vegetarian Taste - 405 Magazine 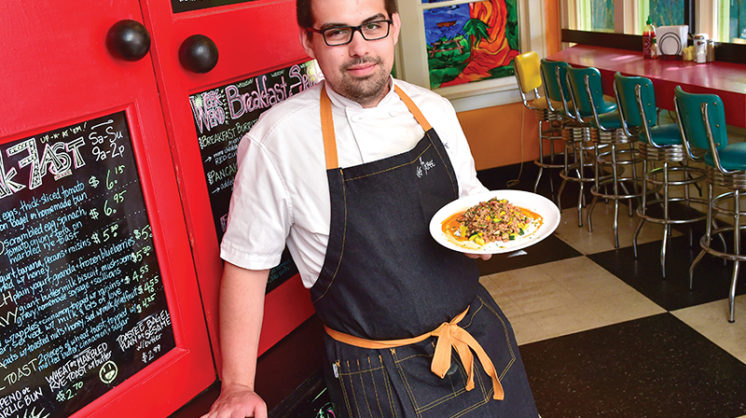 Vegetarian cooking is all about seasoning. Most non-vegetarians can only imagine nightmarescapes of tofu and quinoa – a world devoid of meat, especially and most importantly bacon. The truth, however, is that a good vegetarian chef can make meals that are delicious and satisfying.

Patrick Clark II started at Red Cup when he was only 16. “I dislocated my knee after one month of training, so I missed a month of work,” Clark says. “When I came back to work, I didn’t receive any more training.”

He has been figuring it out ever since, reading and studying voraciously, creating cooking demo videos, working to advance the cause of Oklahoma City as a culinary destination with outstanding vegetarian cuisine. Anyone familiar with the food scene in the metro knows that the regulars at Red Cup rave about the vegetarian fare. That reputation is largely thanks to Clark and owner Kurt Orth.

“Kurt stayed on me for years, getting me to try different foods,” Clark remembers. “If I didn’t like them, he’d say it was because I was a child, and that pushed me even more to try things. Sort of a reverse psychology thing, I guess.”

The restaurant converted to an all-vegetarian menu in 2010, and Clark said they also started buying from local farmers and growing their own food. That’s when he really learned to love vegetarian cooking.

“I grew up poor, so we relied on flavor and spices over quality,” he says. “My mother made a few staple dishes that were based on her Hispanic heritage and our California home.” (The family relocated when Clark was a toddler.)

Now both chef and owner are leaning toward vegan, primarily because of the environmental impact of raising meat for human consumption. Clark said they also have a large customer base of vegetarians and vegans who appreciate the food because the menu isn’t an afterthought. For example, his ratatouille recipe has 16 ingredients, and runs to nearly two pages of instructions. It’s safe to say they take meatless eating seriously. So much so that Clark, a video game lover and avid car geek (’96 Mustang), spends most of his downtime studying and cooking. 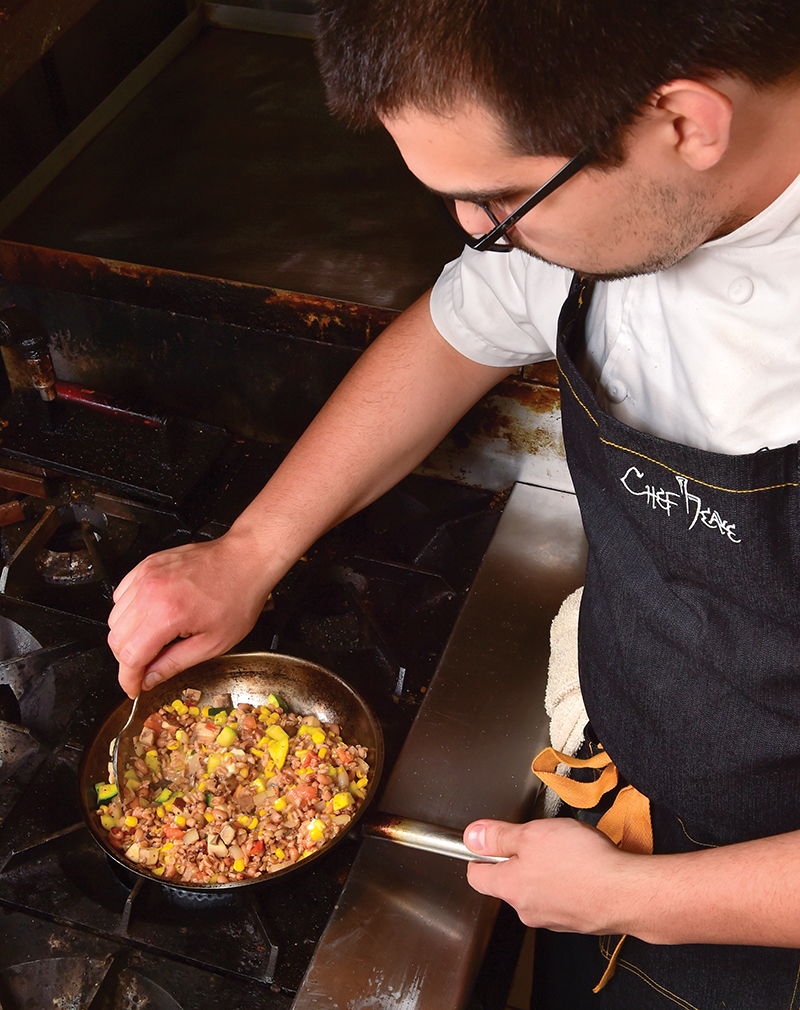 • Cook the mixture until the onions are clear.

• Add in faro, cooked according to package directions, and your favorite beans, cooked until soft. Clark recommends purple hull peas, which are available at Urban Agrarian.

• Cook until warm throughout. Remove from heat and finish with a tablespoon of butter and Cave Aged Madeline Caciocavera, a local hard cheese from Krebs, also available at Urban Agrarian. Serve over polenta.

• salt and pepper to taste

• In a one-quart stock pan, bring water, milk and butter to a boil. Reduce heat to medium, and whisk in the cornmeal in a steady stream to ensure there is no clumping. Once all of the cornmeal is incorporated, continue whisking over low heat until the mixture is too thick for the whisk. Remove from heat and fold in the cheese. Season to taste.