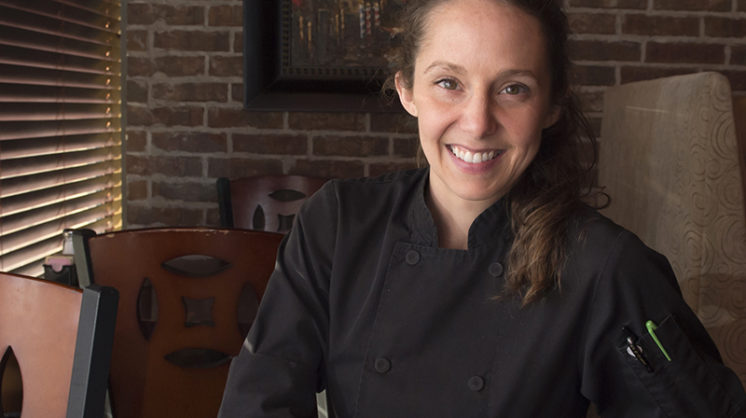 Between Chef Rachel Foster and Chef Gordon Ramsay, there is only one degree of separation. No, this is not a story about the famous British chef (television star, really) having a niece or long-lost cousin who now works in Edmond. Foster worked for Chef Gloria Felix at Reservoir in Silver Lake, California, and Felix was Ramsay’s sous chef on “Hell’s Kitchen” in 2008-09. Foster, who grew up in Minneapolis, said Felix’s leadership was formative in her career.

“Working under Chef Gloria taught me a lot about the work involved in a real, operational restaurant kitchen,” she asserts. “As hard as culinary schools try to simulate a kitchen environment, they will never truly replicate what it means to be a chef. Under Chef Gloria at Reservoir, I was able to be immersed in all the good and all the bad that a kitchen offers.”

Foster, who is now the chef at Moni’s in Edmond, had her formal training at Le Cordon Bleu in Pasadena, California, and spent a couple of years in the kitchen as sous chef at The Mantel in Bricktown. Growing up in Minnesota meant a lot of Midwestern meals: protein, starch, vegetable.

“Generally we would eat as a family, and my Mom would cook something like roast beef, mashed potatoes and green beans,” she remembers. “She also makes a killer pot of chili.”

More than the simple family meals she shared around the table, Foster recalled cooking with her father after catching fresh fish as a child.

“My father was the first to teach me how to bait a hook and filet a fish,” Foster says. “My grandparents had a cabin in northern Minnesota, and when we spent time there, my favorite meal was always the northern fish my dad would catch and cook fresh for dinner.”

Beginning with those one-on-one experiences, Foster developed a love for cooking. She said she doesn’t really remember a moment when she knew she loved and wanted to cook, but she remembers wanting to learn from whomever was cooking for her.

“There is a duality that I love about cooking,” she says. “On one hand, it allows extreme creativity, and on the other extreme structure that requires a lot of attention to detail. I enjoy being artistic, but I’ve never been one to collect things; in other words, I like the way that cooking something that is beautiful and tastes wonderful can be fully enjoyed in the moment and then [is] gone.”

It’s impossible to be associated with anyone Gordon Ramsay thinks is competent and not have that level of determination and grit as part of your composition. Anyone who has watched “Hell’s Kitchen,” as fictionalized as it can be at times, knows that determination and thick skin are as important as talent.

Determination is one of the first words Foster uses to describe herself, and that part of her character means a professional kitchen is perfect for her, both aesthetically and temperamentally.

“I absolutely love the challenge of a kitchen,” she says. “A well-run kitchen has a wonderful balance of teamwork, competition and efficiency that I have yet to find anywhere else.”

For her recipe, Foster chose a dish her mother made regularly when Foster was a child. Minnesota winters are notoriously cold, and this dish is a perfect match for Oklahoma’s coldest months. 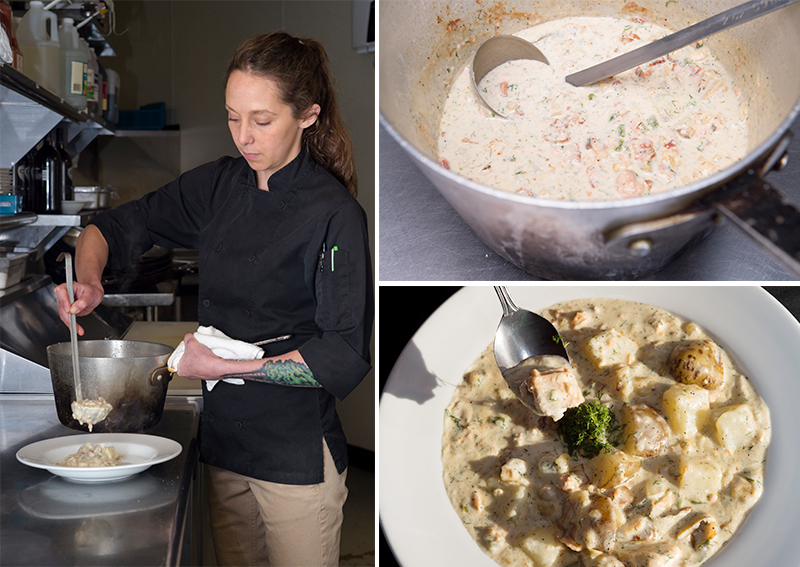 Fry bacon in 3-quart saucepan until crisp. Remove with a slotted spoon, and hold on the side to add later. Pour off all but one tablespoon of the fat.

Add in onions and cook at medium heat until they become tender and translucent, about 5 minutes.

Stir in potatoes, reserved bacon and stock. Let simmer for about 25 minutes.

Stir in the salmon, dill, green pepper, butter and cream. Cook for 10 minutes, then crush up the saltine crackers and add them in to thicken the chowder.

Taste and season as desired.