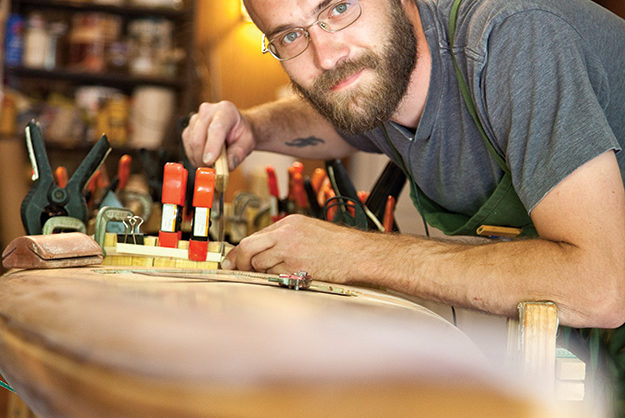 David Laudick’s custom-made kayaks are works of art. Made of hundreds of slender strips of wood, coated and sanded and coated again until their silky finish cries out for a caressing hand, these creations are the Rolls-Royce of watercraft.

Their creator is an unlikely artist – one who never kayaked before he built his first boat. David grew up canoeing – with his dad as a boy and later by himself.

About 10 years ago, he saw a picture of a kayak. Intrigued, he got a book on kayak building from the library. He was so fascinated that he bought his own copy. The book sat on the shelf, but, he says, “Every couple of years, I’d pick it up and fantasize – I actually read it through two or three times so I was really familiar with it.” And that was about as far as it went.

About a year and a half ago, while canoeing, he had a mini “Eureka!” moment. It occurred to him that, for one person, it would be easier to paddle a kayak than paddling a canoe. And a kayak wouldn’t be as bulky to carry.

That was when he decided to build one in his Edmond garage. He already had a number of tools and a general knowledge of how to go about it. By using his book and participating in online discussion groups, he built his first kayak.

David builds the type of kayak known as a sea or touring kayak. Not designed for white water, these offer more speed, comfort and ease of straight line paddling. He follows a strip-built method using thin pieces of cedar and basswood with Brazilian cherry accents.

After building the body, the process of sealing and sanding begins. The whole boat is encapsulated in fiberglass and covered with several layers of epoxy topped with more layers of urethane. The entire process takes several months. The finished product averages 16 feet in length and 35 to 40 pounds. A plastic kayak of the same size weighs about 65 pounds.

As water-worthy as less-expensive models, these kayaks make a definite statement. Anybody can kayak. Not everyone can paddle a masterpiece.