A Spin on the Elk City Centennial Carousel - 405 Magazine 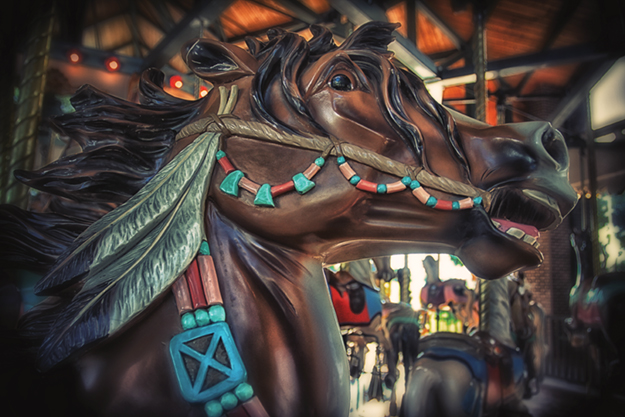 Their Heads Strain Against Invisible Reins, neck veins bulging, nostrils flaring, teeth bared, forelegs frozen in mid-gallop. Some have the look of noble steeds apparated from an ancient bedtime tale, emblazoned with a sleepy crescent moon or a chubby-cheeked sun. Others are born of the American West, bedecked with feather regalia and bridles dripping turquoise and coral, hooves skimming just above the plains.

There are 36 horses in all, arranged in 12 rows of three, and a couple of chariots for the faint of heart. All are carved out of basswood and hand-painted.

As the strains of World War I-era music float from a digital sound system with hidden speakers, the horses glide ahead, bobbing up and down on solid brass poles. They circle and glimmer beneath a carved canopy of mirror-holding angels, reflecting the light of 600 incandescent bulbs illuminating the pride of Elk City: its Centennial Carousel.

As planning was underway for the city’s 100th birthday, the initial talk was of statues and parades. But a thought began to gain hold. What if Elk City did something more durable, something really different?

Then-City Manager Guy Hylton summed up the thinking before the carousel’s dedication in 2001: “I remember when we celebrated our 75th anniversary. We had a pageant and lots of food. But when it was all over, there was nothing left to show for it. For our centennial, we wanted something more permanent, something citizens could interact with and something that would last for years to come.”

The result? The $450,000 Centennial Carousel, which creator Daniel Horenberger of Brass Ring Entertainment in California has called “the most elaborate all-wood carousel built since the 1930s.”

For the past 12 summers, the merry-go-round has revolved in Ackley Park, adjacent to the Route Elk City has never shied away from dreaming big. The largest city in Beckham County is the hometown of nationally known performers ranging from multi-Grammy winner Jimmy Webb to Miss America Susan Powell, to Broadway star and four-time Tony nominee Kelli O’Hara.

During 1901, when it was established in anticipation of the arrival of the Choctaw and Gulf Railroad, the settlement tried out three names to see which fit best. Crowe came first. Entrepreneurs, however, soon ditched the name in favor of Busch, in hopes of luring jobs and a new brewery from Anheuser-Busch. When that failed, the unfazed town leaders switched the name again, to Elk City.

By the next year, the population had grown to 1,000, and soon the town streets were paved in brick. The two-story Ten Thousand Club Building was constructed on the corner of Broadway and Jefferson two months before statehood to headquarter the Ten Thousand Club. Its mission: to increase the town’s population to 10,000.

66 Museum complex off I-40, every evening from 6 ’til 10. The ride is open Memorial Day through Labor Day, and again around Christmas. Price: one dollar per ride.

Some of the favorite horses now have chipped paint or worn surfaces from being patted and spurred and caressed. The mount with the carved pistol is the most loved of all, a veteran of hundreds of imaginary quick-draw gunfights.

After the ride slows to a halt, some of the riders jump off to pay and ride again, passing the brass plaque out front: “A gift from the twentieth century Elk Citians to the Elk Citians of the twenty-first century.”

They remount and giddy-up in circles above the old Cheyenne Arapaho grounds, awash in the gold of a Western Oklahoma summer sunset.

Editor’s Note: This is the 12th installment in a continuing series as author and photographer M.J. Alexander chronicles her travels across the state of Oklahoma.