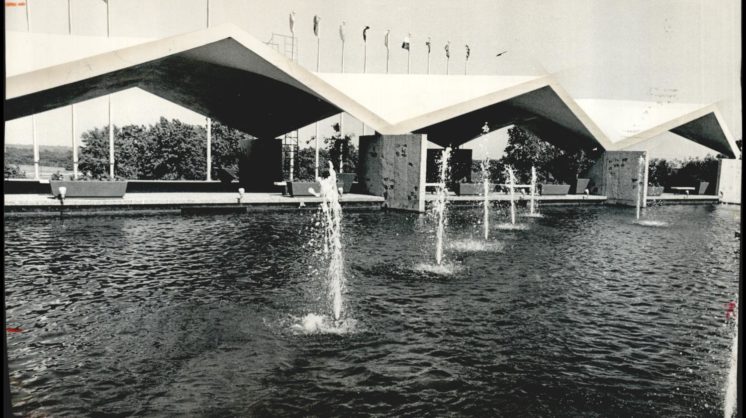 Courtesy of Oklahoma Historical Society. The pitched roof lines of the National Cowboy and Western Heritage Center were designed to mimic tents on the prairie.

Celebrating ‘The Cowboy,’ an OKC treasure.

After a decade of planning, fundraising, construction and delays, the long-awaited dedication of the National Cowboy Hall of Fame and Western Heritage Center became a reality on June 26, 1965. It made sense that Western actor John Wayne would be front and center at the festivities.

He was an avid supporter of the museum who, five years earlier, had used a branding iron to burn a W into a wooden concrete form at the building site. The museum sought to honor and reflect on the many different people who shaped and were shaped by the American West, and to many, the characters Wayne portrayed in his movies represented their strength and grit.

In the early 1950s, Missouri businessman Chester A. Reynolds was concerned about the preservation of the United States’ Western heritage. He envisioned an institution to recognize this unique period in history and initiated a campaign asking cities for site proposals. Oklahoma City was selected, in part because of its central location, proximity to the Chisholm Trail and donation of property on Persimmon Hill.

The building design featured a modern look with a roof of white peaks that mimicked tents on the prairie. Groundbreaking happened in 1958, and just as the city could see progress, the team ran out of funds in 1961. Revenue bonds were sold through a newly formed trust, and construction picked up again in 1964.

After opening, major acquisitions continued along with the annual Prix de West Invitational Art Exhibition and Sale of historical and contemporary Western pieces. But the ’80s brought discord to the internal team. Moving the museum to the west side of the city was even suggested. Change did come with reorganization of the board of directors and expansion of board membership, a resolution of financial issues and an aggressive building campaign between 1991 and 1997.

Now known as the National Cowboy and Western Heritage Museum, or The Cowboy as it likes to call itself, the world-class institution has expanded its size and focus to include several digital halls of fame, partnerships, events, galleries, exhibits, educational and children’s programs and a research center, along with yearly events to celebrate the nation’s Western history.

The Cowboy is also the new permanent home of the Professional Bull Riders Hall of Fame with an unveiling in spring 2023 in the museum’s American Rodeo Gallery, to be expanded soon after.

Showcases and galleries include exquisite art by Frederic Remington and Charles M. Russell, a replica of a turn-of-the-century small cattle town, rare and historic firearms, artifacts of cowboy and rodeo culture and history and Native American art and historical objects. Outside is the museum’s hands-on learning area Liichokoshkomo’, which is named after a phrase meaning “let’s play” in Chickasaw. The 2.3-acre space is meant to tell the stories of many groups of people that traversed the West, such as a rodeo arena that tells the history of Mexican vaqueros, and seven Native structures including Puebloan cliff dwellings and a Caddo grass lodge.

The popular Western Performers Gallery features an extensive collection of objects and mementos from actors and entertainers who depicted and played up the West in film, TV, literature and popular culture. There’s a saddle purchased by Will Rogers at the St. Louis World’s Fair in 1904, a hat worn by Tom Selleck in Quigley Down Under and engraved revolvers from Dale Robertson’s TV series “Tales of Wells Fargo.”

Wayne is represented, too. Along with personal art items and movie memorabilia in the gallery, there’s a bronze statue of him near the front of the museum. He was a member of the board of trustees from 1968 until his death in 1979. The museum received the John Wayne Collection in 1979.

“He believed in the Western culture and the people who founded our country, and he believed in those values,” said Anita LaCava Swift, Wayne’s granddaughter, to The Oklahoman in 2010. “He thought it was really important to have a place where those values could be shared with and shown to many generations.”