A World of Difference - 405 Magazine 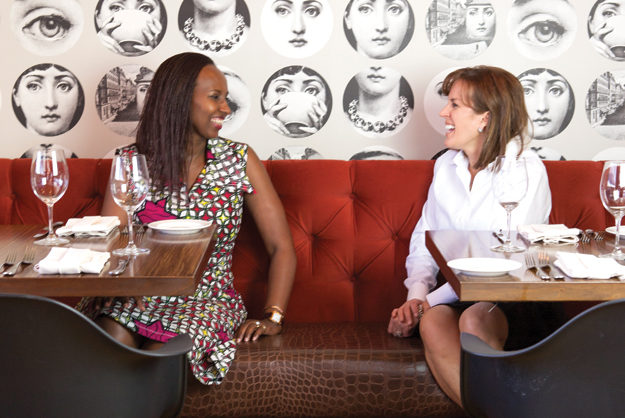 HER EMAIL SIGNATURE READS, "I EDUCATE AND EMPOWER WOMEN."

These words sum up the life calling of  Terry Neese, founder and CEO of the Institute for the Economic Empowerment of Women (IEEW), a nonprofit organization established in 2006 whose focus is helping women entrepreneurs learn to build or grow a business.

Helping women to succeed in business sounds easy enough in theory, but the question of how to do it is much more complex, given the volatility of our global society. If there were textbook solutions to building businesses or reaching one’s full potential to provide for her family and strengthen her community, the IEEW might already have identified and delivered them to aspiring entrepreneurs. For many women in other countries, however, success in business is often hindered by extreme political, cultural or economic obstacles, at best. At worst, creating a thriving, woman-owned business can be tantamount to a life-threatening condition.

Encouraged by former first lady Laura Bush to assist women in war-torn Afghanistan to rebuild their country post-Taliban, Neese visited the country and instantly understood her life’s calling. She immediately extended the scope of advocating for women as business leaders to a global level by developing the organization’s Peace Through Business program, aimed at providing long-term business education to women whose homelands – and lives – have been ravaged by genocide, war and extreme poverty.

“In business and in life, there are so many risks. But if we listen to people telling us to stay home, we cannot carry on our life. And we cannot stop living.” – Yelda Mahmood, 2010 Peace through Business graduate

The program, which provides training and mentoring for women from Afghanistan and Rwanda, supports Neese’s belief that an economically sound country has a much greater capacity for peace. Intrinsic to such an outcome is the assurance that the lessons learned through the Peace Through Business program will be “paid forward” to others in those countries and that its participants will adopt a greater understanding and involvement in public policy.

Peace Through Business consists of in-country training every year for women entrepreneurs in Afghanistan and Rwanda. It’s almost an MBA crash course. Among those women, 30 are selected to travel to the United States every July for a “Business Boot Camp,” a higher-level business and leadership training at Northwood University in Cedar Hill, Texas. The program also involves a weeklong mentorship program with an American business owner in a matching industry, as well as participation in the International Women’s Economic Summit at the program’s conclusion. Following a graduation ceremony, the students commit to what is perhaps the most important component, called “Pay It Forward,” through which the women “give back” by mentoring other women entrepreneurs in their respective communities.

Progress seldom emerges without a struggle and, in countries such as Afghanistan and Rwanda, the empowerment of women often translates to a highly-charged, political and cultural provocation. For all their differences, the women who participate in Peace Through Business comprise a pioneering sorority of defiantly courageous individuals who are willing to put the vision of a better future for their children ahead of their personal safety.

Amid the violence of the war in Afghanistan, Dr. Lida Shams chose to stay in her home country to provide medical care to women as a health and nutrition coordinator. Following the decline of the Taliban’s repressive regime, Dr. Shams  pursued a career in obstetrics, completing a four-year residency program at a maternity training hospital, where she trained doctors and midwives. In addition to receiving a degree in obstetrics and gynecology, Dr. Shams received training in ultrasonography, which was relatively new technology in Afghanistan at the time.

Dr. Shams’ passion lies in providing quality care by female doctors, something that is very important for Afghan women. “Before coming to the United States, we must create our business plan, presenting obstacles and identifying opportunities for success,” Dr. Shams explains, noting that those challenges are often great.

By shadowing her mentor, Dr. Susan Chambers, last July, Dr. Shams focused on the management side of owning a medical practice. Now that she has returned to her Kabul-based OB/GYN and Ultrasound Center, Dr. Shams has begun the “Pay It Forward” phase of the Peace Through Business program by sharing her knowledge with other professionals in her community through an ultrasound training program, in addition to the gynecological and obstetrics services her clinic provides to women.

Dr. Chambers, who has mentored other participants with health care backgrounds, notes, “It has always been fascinating to see the different practices they do in the other countries, as compared with the U.S.”

Sahiba Nooristani is a two-time participant (2011 and 2012) in the Peace Through Business leadership development program. Her business interests include professional event planning, as well as fashion design. By participating in Peace Through Business, the beautiful and fiercely independent Sahiba hopes to develop the necessary skills to go into business on her own.

In 2010, her interest in professional event planning aligned well with Sahiba’s position with the Afghanistan Investment Support Agency, where she was responsible for promoting and facilitating new business in her role as the chief planner for an exhibition that helped to showcase products created by Afghan women; many signed contracts to supply their goods to buyers.

Last year, Sahiba assisted in the Peace Through Business Fashion Show. She was thrilled to exhibit some of her own designs during the program, under the mentorship of Eden Salon & Spa owner Jan Hill, who created the annual fashion show and fundraising event.

“My Peace Through Business journey has been a great experience,” Sahiba recalls. “It has allowed me to take the very initial steps on entrepreneurship and to learn more about the business world. It made me find a leader in myself and it encouraged me to bring out my hidden capacity so I can prove that Afghan young women can be innovative and diversified in business.”

Nearly 800,000 Rwandans lost their lives to the 1994 genocide and more than 2 million refugees fled the country, creating a gender imbalance in the country. Today, as women comprise the majority of the population, Rwanda is poised to rebuild itself with the highest percentage of women in government of any country in the world.

Josephine “Fina” Uwineza attended school in Kenya and Geneva, far away from the turmoil in her native Rwanda. Following the genocide, Fina returned to her country in 1998, to quiet her persistent longing for her homeland.

She opened Kigali’s first Chinese restaurant, which she named Flamingo. Flamingo’s popularity has allowed Fina to employ more than 20 people from her community. The restaurant provides dining, catering and conference facilities.

In addition to her restaurant, Fina has launched an agricultural company, “Fina’s Freshings,” through which she works with local farmers from surrounding rural areas. Fina sells her own chili peppers locally and plans to export them in the future.

Fina’s program mentor, Lori Tyler, owner of Stella Modern Italian Cuisine in downtown Oklahoma City, believes the rewards of the program are just as great for the mentors, who are the professional counterparts for each participant.

After spending time with Lori at Stella, Fina observed Sheree Holloway, owner of Café 501 and Boulevard Steakhouse in Edmond, as well as a day with Cally Johnson, a chef and owner of Big Truck Tacos and Mutt’s Amazing Hot Dogs in Oklahoma City.

Fina was one of two recipients of the 2012 Enterprising Women of the Year awards at her graduation.

What about the Peace Through Business program inspires Fina? “I’m inspired by the fact that we can work together as women, despite our tribal differences,” she says. “When we focus on business, we can put those differences behind us.”

Power Of The Press

Freshta Hazeq, a 2012 Peace Through Business graduate from Afghanistan, started her own advertising and printing press company in Kabul – the first woman-owned printing press in her country. Shortly after being named one of two Enterprising Women of the Year at her graduation ceremony, Freshta returned to her country and won a job bid over a male competitor – the kind of bid that would advance her company to a considerably higher level. Unfortunately, male workers within her company were bribed to sabotage her business and the Taliban was enlisted to burn the company down.

Driven by fear for her life and for the lives of her family, Freshta initially fled the country. But her retreat into anonymity went against an even stronger drive: to build a successful enterprise and provide for the very family she wanted to protect. Courageously, Freshta went back to face threatening opposition. “I never lost my passion to go ahead and ignore all of them,” she says. “I believe nothing is impossible and no work is out of the reach of women.”

Freshta’s program mentor was Jason McWilliams, vice president of Impressions Printing in Oklahoma City. Jason finds inspiration from Freshta’s story. “Mentoring Freshta revealed so much,” Jason says. “The adversities she faced, and still faces, as a woman-owned business in her country cannot be comprehended by most of us here. I am in awe of her determination, will, strength and perseverance.”

Terry Neese adds that Freshta will be returning to Oklahoma City this July for additional leadership training. “This is the kind of person who could return to Afghanistan and seek the presidency,” Neese observes.