Acquiring a Taste for Spain - 405 Magazine 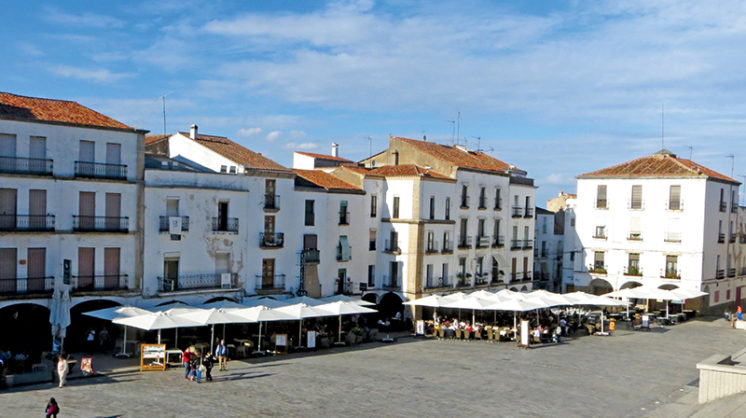 If you’ve ever fantasized about living in another age, you may have been brought up short by considering the disadvantages. Fortunately, there are places to indulge your dreams without depriving yourself of modern comforts. Cáceres, Spain, is one of those spots.

With roots going back to Paleolithic times, the historic center of the city has Roman foundations upon which Moors built from the 10th through 13th centuries, and is topped off with construction from the Christian Re-Conquest through the Renaissance. Pick your period – they’re all here.

Around the old, walled town – A UNESCO World Heritage Site – modern Cáceres and the province of the same name spill over the rolling landscape of Extremadura, one of Spain’s 17 autonomous regions. It’s an area of scenic beauty and varied attractions, but our group was here for one reason: Cáceres was named Gastronomic Capital of Spain for 2015.

Gourmet Paradise: The city of Cáceres is the capital of the province of Cáceres, home to a number of products identified by the European Union as unique and labeled with a Protected Destination of Origin or Protected Geographical Indication designed to promote and protect names of quality agricultural products and foodstuffs. These include Torta del Casar cheese, Ibores cheese, Gata-Hurdes olive oil, La Vera paprika, Jerte cherries, Villuercas-Ibores honey, Ribera del Guadiana wine, Dehesa de Extremadura Iberian ham and Extremadura lamb and beef.

Our group visited a cheese museum in nearby Casar de Cáceres before touring: Quesos del Casar, a modern cheese factory. While the company makes several types of local cheese, the Torta is the star. It’s a pungent, super soft, sheep’s-milk cheese with a taste somewhat like a combination of brie and gorgonzola. To serve, the top rind is sliced off the cake-shaped cheese, and the rest of the rind makes the serving bowl. It’s an acquired taste I quickly acquired. Only small amounts of the cheese are made – it’s not available year round – and it’s expensive. Surprisingly, I found some at Forward Foods in Norman. It’s worth seeking out.

On this trip, we spent six to seven hours a day eating … not a regimen I’d recommend for general travel. But we found wonderful restaurants and amazing dishes.

One of my favorites at Eustaquio Blanco in modern Cáceres would be surprisingly easy to duplicate. It was a combination of boiled shrimp, fresh asparagus and scrambled eggs with a little onion, garlic and olive oil.

We visited the Cayena Kitchen Club and watched Chef Iván Hernández prepare salmorejo – a cold soup of tomatoes, bread, garlic, olive oil and salt, which he kicked up by adding a scoop of melon ice and ham shavings. I’m a big fan of salmorejo and was delighted to find it on the menu in Iberia business class on my flight home.

Chef Iván’s lamb stew was also delicious, and he finished with crispy shells with ice cream and honey. The school is associated with the restaurant next door, so if you aren’t interested in taking a class, you can at least try these wonderful items in the café.

At Atrio (two Michelin stars) in historic Cáceres, we sampled the highest of haute cuisine with a 13-course, three-hour tasting lunch. The dishes here were a combination of creativity, art, taste and even humor. One dessert featured a rich custard, yogurt ice cream and coconut foam looking a lot like a fried egg.

The Atrio wine list is one of the best in Spain and the architecturally unique cellar is a treat to tour. The collection of Chateau d’Yquem has its own special room and includes an 1806 bottle of the Bordeaux, one of only three in the world. No, you can’t order that one.

We tried more traditional foods at our parador, which are government-owned accommodations in historic structures or particularly scenic locations, each offering area specialties.

The appetizers in Cáceres featured the famous Iberian ham in several guises: on toast, with deviled quail eggs, thinly sliced with melon balls, served in a cone with cream cheese and more. The meal ended with an artful arrangement of small bites of regional sweets on a chocolate tree.

The culinary legacy of Cáceres includes Christian, Jewish and Muslim influences married with traditional Spanish and Portuguese favorites. Not only can you experience the tastes of the past, but innovative chefs are constantly bringing new ideas to the cuisine.

More Than Merely a Meal: Parador de Cáceres is housed in two medieval palaces complete with suits of armor and regal banners. The rooms are strictly 21st-century, and the bathrooms have more amenities than you’re likely to use. We also checked out the Atrio Hotel: super-modern, but like its restaurant, artfully ensconced in ancient stone walls.

Although the trip was food focused, there’s so much more in Cáceres and vicinity. Touring historic buildings, shops, museums, browsing local arts and crafts and just wandering through the maze of narrow streets is sure to keep you busy.

And it’s just a short drive to one of the country’s most scenic areas, the Natural Monument of the Barruecos: an area of little lakes, giant boulders and great birding with one of the largest stork colonies in Europe. The Vostell Malpartida Museum, an art gallery featuring works by members of the Fluxus movement, is also located in the park.

With its history, art, architecture and cuisine, Cáceres seamlessly blends the charm of the old world with the best of the new. Altogether, it’s an out-of-this-world experience.

To get to Cáceres
Cáceres is about 3.5 hours west of Madrid by car or train; by bus, about four or five hours. Technically, you can’t drive in the historic part of the city, and you wouldn’t want or need to. (You can drive to the parador parking lot.) To really see the countryside, a car is the best means of transportation. The main highways in Spain are excellent.

To get to Madrid
There are no direct flights from Oklahoma City but several choices for one-stop flights. My favorite: American to Chicago then partner airline Iberia, the flagship airline of Spain, to Madrid. It’s a great way to get a head start on your Spanish experience.

Did You Know?
Free online language lessons are available through the Metropolitan Library System so you can hablar a little español.