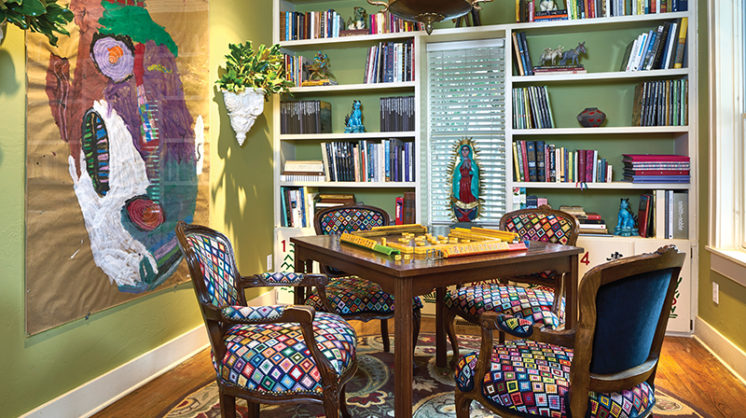 Lin and Ernesto Sanchez have created a life and a home together that is equal parts romance, artistic expression and fun, with a splash of gracious family tradition. Married 14 years, the pair met when Lin agreed to host a party for Ernesto – at that point the artist worked for MARCO, the contemporary art museum in Monterrey, Mexico, which had brought part of its permanent collection for an exhibition at City Arts Center.

She remembers, “When they asked me to host a party for a visiting artist from Monterrey, I said sure. I guess I had him visualized as an old man, and then when I was introduced to him, he turned out to be … Ernesto! And that was it. We knew we had to be together.”

Ernesto’s recollection is sweetly similar. “As much as I wanted to meet other people, I just wanted to be near her to talk and feel her presence.”

On their first date, as the two were making small talk, Lin mentioned that she’d seen a suspended daybed while traveling and that it had really captured her imagination. Shortly thereafter, Ernesto had to return to work in Mexico, but on his next visit, he built her bed. Their collaboration had begun. 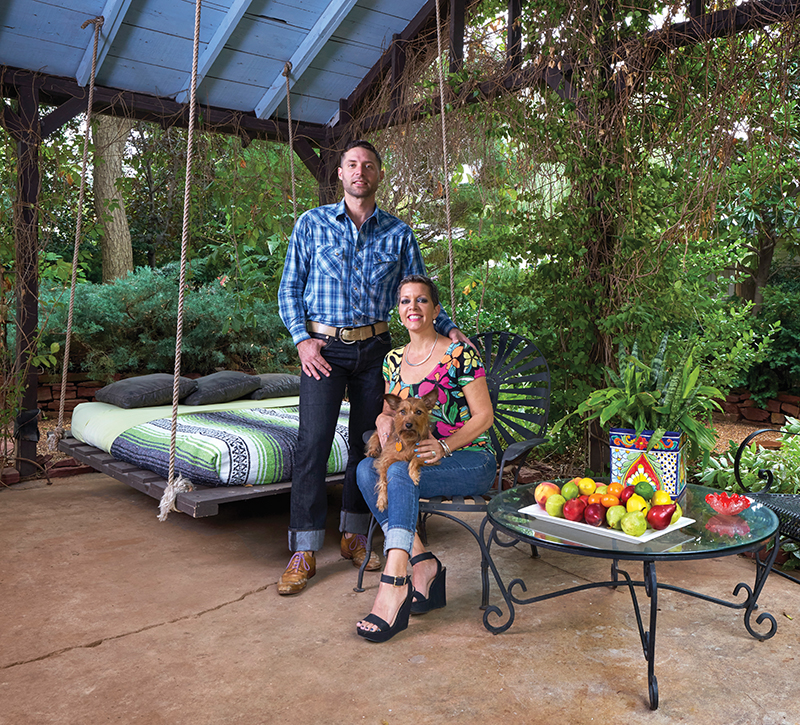 Step inside the Sanchez home and a glance to the right will reveal a riot of color and pattern in a compact space. This is the game room, which has served as the headquarters of Lin’s Monday Mah Jongg group for more than 15 years. A huge painting by her son, Miles Kolliopoulos, dominates one wall; Mah Jongg-tile cabinet doors add a cheeky touch to the bookshelves.

A game table anchors the room, surrounded by four striking needlepoint chairs that are a beloved source of pride and triumph for Lin: Her grandmother, Katherine “Topsy” Hartgrove, was a prolific needlepoint enthusiast, whose work can be seen around the Sanchez home in various forms. Topsy had completed three of these chairs before her death, and they’d found their way into the homes of Lin’s mother, an uncle and a family friend. Over a period of years, Lin herded the three chairs into her own home and began work on a fourth – which she completed in October, just in time for what would have been Topsy’s 100th birthday.

Ernesto is a painter and sculptor, and serves as head of exhibition design and installation for the Oklahoma City Museum of Art. His work fills the house and the garden, and this curvaceous piece, “Mujer d’Oro (Gold Woman),” was created for an art exhibition two years ago at Studio Six in Oklahoma City. It is a section of a tree trunk, felled by weather in the back yard.

About his artistic process, he explains, “It’s pretty simple: start carving the wood until the piece reveals itself on what form or shape will appear. Obviously, I had a preconceived idea of what I wanted it to be. It is an homage to Lin.” 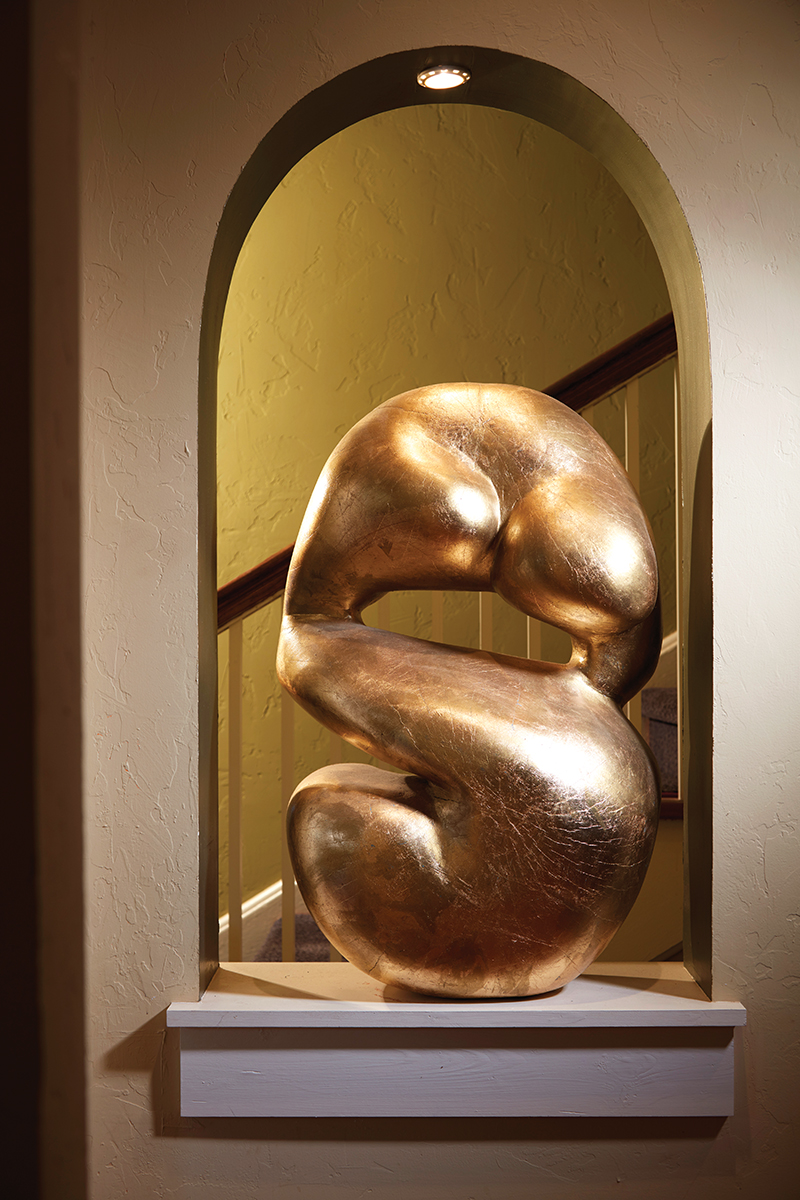 Lin and Ernesto have transformed a small yard into a lush series of gardens and outdoor living spaces that now total nearly an acre in size. The couple was able to purchase easement land from the county, which gave them space to unleash their creativity. “The transformation is ongoing,” Lin says. “It really began when some friends wanted to use the space for their wedding reception. So we fenced it in on the east and west. Then we did the north and south. The pool was next, and we used the dirt from the excavation to create the planting beds.”

They’ve created a studio for Ernesto, a beach area complete with sand and chaise lounges and a shaded cantina used for outdoor dining. Throughout each of their many projects, a small team of experts has been key, including David Gipson Design, John Fluitt and Garden Design Associates. 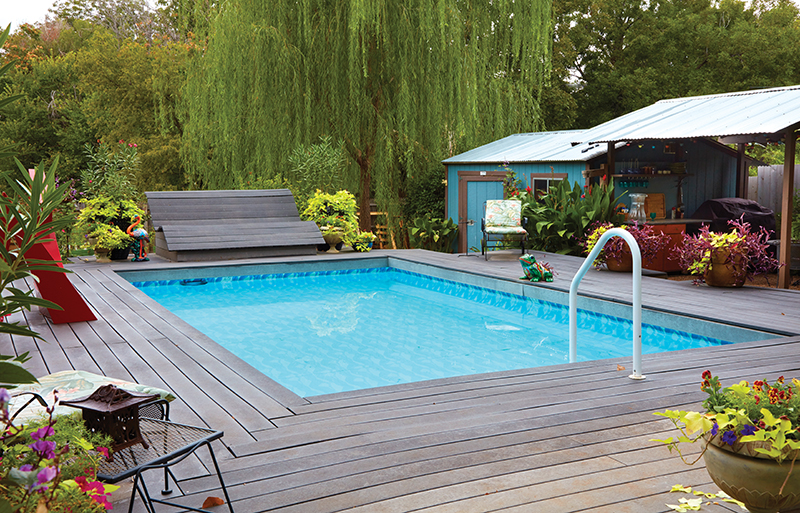 Lin does all of the maintenance, and it is a full-time job. Fortunately, three dogs and Sunshine the chicken are generally on hand to lend their expertise. “Our next projects are finishing a shade structure and an awning for the south deck,” she says. “And at the east end of the Way Back, we are going to build a much larger studio for Ernesto. And, in a perfect world, we’d add a functioning fireplace in the living room, knock down the current studio and add a storm shelter.”

And so it goes at the Sanchez home, a colorful, welcoming surprise in the heart of Oklahoma City.