Anchor Down: A Bon Voyage - 405 Magazine 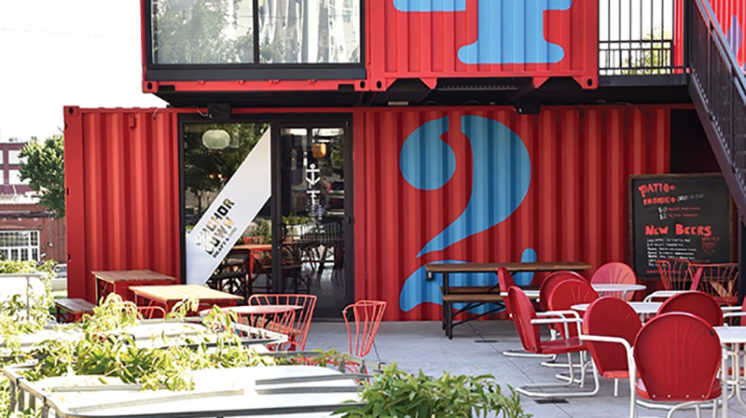 Think about specialization. It’s one of the reasons humanity invented civilization in the first place; so that not everyone would have to be hunting and gathering all the time, and some people could concentrate on making bread or hats instead. In terms of restaurants, it’s often a function of population – a small town might have one diner, a larger town can also support a pizza place and a Mexican restaurant, et cetera. The bigger a city is, the more variety it can support, and with more disposable income for its residents comes a greater willingness to experiment a little more in ideas. All of which is to say that the mere existence of a bar that specializes in gourmet corn dogs should indicate enough about OKC’s development to put a smile on your face. And once you actually try Anchor Down in Deep Deuce … well, keep that smile handy.

Each entry on the corn dog menu comes with chips (which are fine if not remarkable) and is served in two half-sized versions (“puppies,” so to speak) – the better to trade and share with a comrade in consumption:

Bird – chicken sausage speckled with pepper; the onion in the batter is more aromatic than overpoweringly sharp in flavor, so don’t let that be a deterrent. There’s more tang in the accompanying onion dip, and it’s delicious, which is not something I ever expected to say about onion dip.

Wild – the ingredients vary, described on the menu as “whatever we get our hands something of a house specialty; meanwhile, the Cheese Dog is a battered slab of Tilamook cheddar with a luscious rosemary-spiked tomato gravy.

Plus, whether you order them as the starters they ostensibly are, according to the menu, or the dessert they are in spirit, don’t overlook the gooey strawberry fritters with vanilla sugar: they are basically the earthly reflections of the funnel cakes we will someday eat in heaven.

As rewarding as the corn dogs alone are for your inner child and outer flavor aficionado, the bar part of the equation is equally inviting, thanks to its well-chosen beer taps, specialty cocktails and even combinations of both. I can hardly overstate how thoroughly I relished the Old Bessie, a draw of the hefty Left Hand brew Milk Stout Nitro that was jazzed up with doses of bourbon and ginger honey liqueur. And my brother, who was back in town visiting after moving to near University of Texas, was impressed by the presence of Austin Eastciders on the drinks menu – their craft ciders are apparently trendy and legit.

All in all, Anchor Down makes an easily recommendable hangout spot and fills a niche we as a metro are fortunate to have. The menu isn’t huge, and its range is pretty specific, so if you’re in the mood for, say, a light salad, you might want to keep moving. But if you’re looking for some excellent drinks with gustatory accompaniment you can’t find anywhere else, set sail and enjoy.