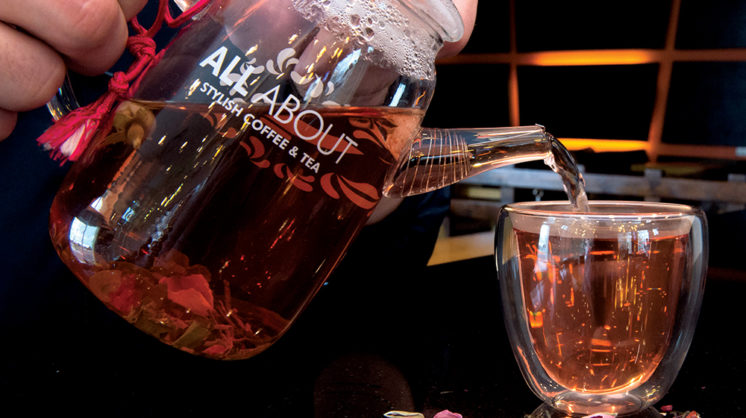 Here’s some bad news for narcissists: The name of local café chain All About Cha isn’t about you. The last word isn’t part of a slangy thrown-together contraction, such as don’tcha or how’boutcha; if you don’t recognize it, that’s probably because it’s not English. In fact, it’s older than the English language, referring to a practice that’s been around since before the days of Julius Caesar. It’s not even really “cha,” that’s a transliteration of the Mandarin character , which means “tea.” Basically, these little oases dotting the metro are named All About Tea … just with a little more character and atmosphere. Which, considering the experience, is pretty apt.

There are eight locations as of early 2017, spanning from Tulsa to Southlake, Texas – and including one in Moore, for which I’m personally grateful. However, the original location, founded in 2010 just east of Broadway and 33rd in Edmond, remains worth seeking out; its comfortable ambience might strike the best balance of any link in the chain at blending sun-dappled bustle and mood-lit calm into a crisp, classy whole.

As you’d expect, the tea is sublime, with options ranging from Indian black to Korean green to special house blends. This rose tea is a delicate, fragrant brew flavored with Chinese matrimony vine (lycium barbarum, if you’re feeling fancy) and cactus. And despite the name, All About Cha is also happy to whip up non-tea-based treats – coffee classics, less ubiquitous concoctions such as the must-try goguma (sweet potato) latte, pastry delights and even salads, wraps and sushi.

Convenient, comfortable and completely stocked with tastiness of all kinds … if you’ve never been, go experience it, and you’ll likely discover you’re all about it, too.