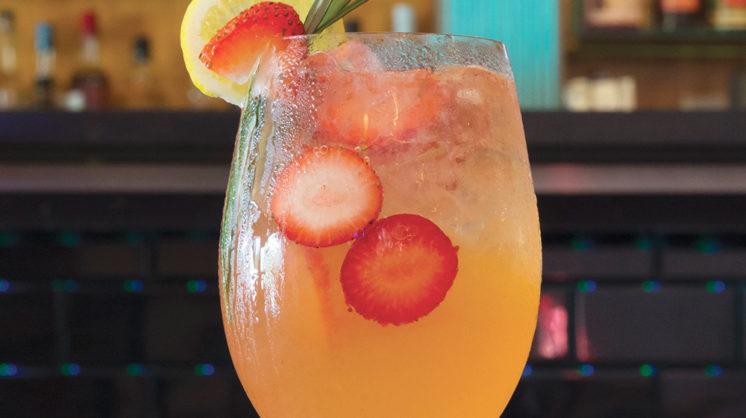 The beverage has English connections, although some of its makeup adds a more continental flair and its overall appeal is universal. It’s elegant, delicate and stylish, but with enough colorful, vibrant character to make it seem inviting rather than unapproachable. And while timeless, it’s strongly associated with summer. All in all, the Lobby Bar's luscious cocktail amply earns the name Audrey Hepburn.

The drink is driven by Broker’s gin, which is crafted at a 200-year-old distillery in England, and so British that each bottle comes topped with a little bowler hat. That’s combined with a strawberry shrub (a tangy syrup made from fruit and vinegar), lemon juice and a Spanish white wine called Blanc Pescador, for a little extra lightness and sparkle – plus a swirl of Esprit de June, a delicately flavored liqueur made from the short-lived flowers of grapevines in bloom. A fitting beverage to share its name with a Belgian-born British actress who epitomized vivacious grace in Roman Holiday and Breakfast at Tiffany’s. And as for the seasonal connection, Truman Capote introduces Holly Golightly like this: “It was a warm evening, nearly summer, and she wore a slim cool black dress, black sandals, a pearl choker.”

The little black dress Hepburn made so famous is also an iconic symbol of sophistication and taste – which would be right at home in the unmistakable art deco elegance of the Lobby Bar, inside the WWII-vintage Will Rogers Theater at 4322 N Western. The classic venue packs a full menu of both food and drinks, but fans know that an Audrey Hepburn never goes out of style.