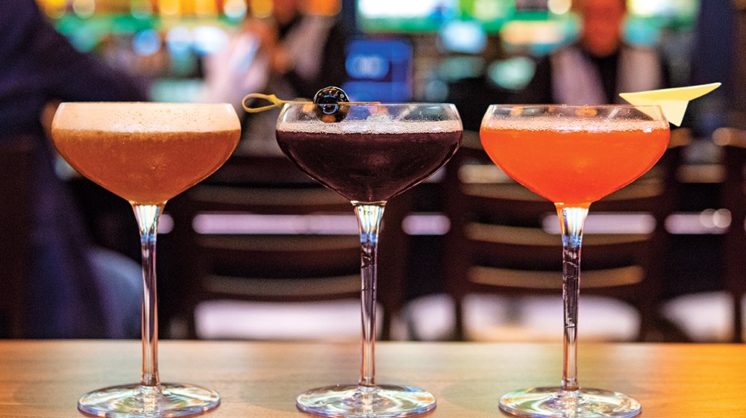 If the name Mahogany makes you think of steak, it should – providing prime cuts is the restaurant’s raison d’etre, after all, and they do it well at both locations: There’s one near Edmond at 3241 W Memorial, and another in the heart of downtown OKC at 145 W Sheridan.

But there’s more than beef waiting to be discovered on the menu, and this is a fine time to sample the fruits of the effort they’ve put into revamping and expanding the cocktail list. Take, for example, the trio we were fortunate enough to sample recently:

The Paper Plane is easy to recognize thanks to the little example of origami perched on its rim. It’s a concoction of bourbon, lemon and liqueurs Aperol and Amaro Nonino, and sommelier and beverage director Michael Son said it’s become one of his favorite cocktails.

The Ultra Violet is a variation on the gin-based Aviation cocktail that’s also on the menu. This take is “deconstructed and sort of turned on its head” to emphasize the lovely purple shade of its crème de violette. It’s surprisingly light and fruity.

The Cable Car – besides being a timely subject for anyone anticipating downtown OKC’s newest transportation system – wound up being our favorite of the three. The premium Ron Zacapa 23 rum might have had something to do with that, but we were especially impressed by its topping of foam containing a cinnamon-vanilla simple syrup with a dash of Cointreau.

While straight whiskey or a robust red remain excellent complements to top-quality steak, Mahogany has done well at broadening their preprandial possibilities. And a larger selection of beverages such as these is definitely a feat worth toasting.