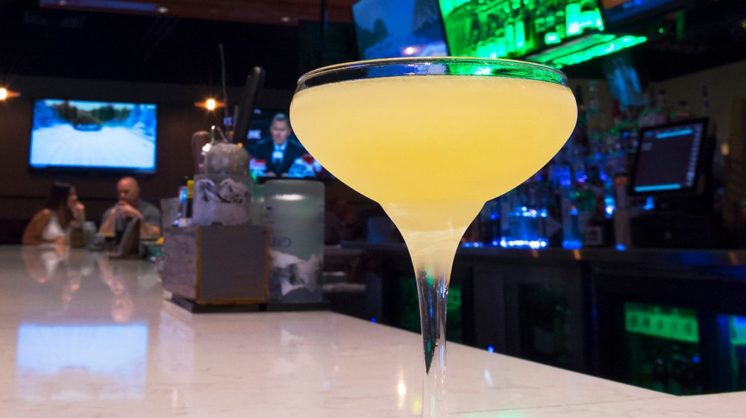 Pub W bar manager Rick Patino recently told us that coming up with new names for cocktails is “the hardest part of the job,” but if you’re trying to evoke the spirit of a time renowned for its wild, jubilant, often drink-based revelry, history has done the lion’s share of the work for you: presenting the F. Scott Fitzgerald.

The drink is driven by Plymouth gin, whose softer juniper flavor is braced up with rosewater honey and a splash of lemon juice. The result is a bright, refreshing citrusy beverage that Pub W points out is a close cousin in style to the Bee’s Knees, a classic cocktail from the Prohibition era – i.e., the Roaring Twenties, i.e., the Jazz Age. The Bee’s Knees was somewhat optimistically named for the contemporaneous expression of utter excellence, but probably also influenced by the inclusion of honey, which was added to mask the smell of the often-harsh gin being produced during that era. As a matter of fact, gin was Fitzgerald’s liquor of choice, in part because he believed it left less of an odor on the drinker’s breath – so the fragrant honey in Pub W’s cocktail that bears his name is an especially apt choice.

All three Pub W locations – 3121 W Memorial, 10740 S May or in Norman’s Brookhaven Village at 3720 W Robinson – should be able to shake an F. Scott Fitzgerald up for you. Whether you’re raring for a giddy rumpus or quietly musing on the intertwined fluidity of past and present, this modicum of gin in a marvelous concoction should prove a delightful lubrication. Enjoy, old sport.