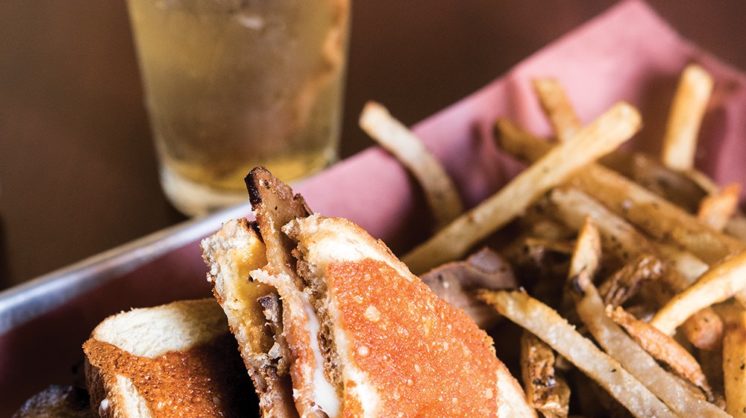 When it comes to restaurants, people are apt to think first of categories and genres. If I invited you to try a new place called Savor, your immediate reaction would probably be to ask, “Oh yeah, what kind of food do they serve?”

Giving your eatery a distinctive theme gives prospective diners a hook, something to focus their attention. But, since they are by their nature limiting, structuring a complete restaurant around a food theme can be hard. A specific theme ingredient is harder still – if any particular dish doesn’t include enough of the good stuff, diners might feel let down, but a successful restaurant can’t consist solely of a big pile of one foodstuff; you want to provide enough variety to make a meal and give diners options, while doing enough chefcraft that it feels as though care and thought went into the execution. I’m sure it’s a delicate balancing act – basically like finding a way to have your cake and eat it, too.

Chef Sean Cummings is more than up to the challenge, and the key ingredient in question is far from secret, considering that the name of his newest venture is Bacon. For anyone who has an appreciation for that prince of pork products, this little space near May and Grand is pure paradise.

Formerly Land and Sea, formerly Sean Cummings Irish Pub, still next door to his spouse Cathy’s justly beloved Italian restaurant Vito’s, it remains a small, inviting café, cozy and dim inside with a penny-topped bar and comfortable blend of wood tones in floor and table and chairs. And if you’re not looking too closely, it might take you a second or two to realize that all the framed pictures on the walls are of various slices of bacon and pro-pigging-out slogans.

And what a feast awaits: appetizers range from smoked jalapenos stuffed with cream cheese and wrapped in bacon to the architecturally impressive tower crowning a base of focaccia with slices of fresh mozzarella, tomatoes and basil (and bacon), drizzled in a balsamic glaze. But your best bet comes right to the heart of the theme, albeit in a slightly Forrest Gumpian manner – the Bacon Sampler serves up astonishingly tender jowl bacon, shoulder bacon, homemade Canadian bacon, Kentucky bacon sausage, bacon jam and even a phenomenal praline-like dessert bacon topped with pecan and sugar. 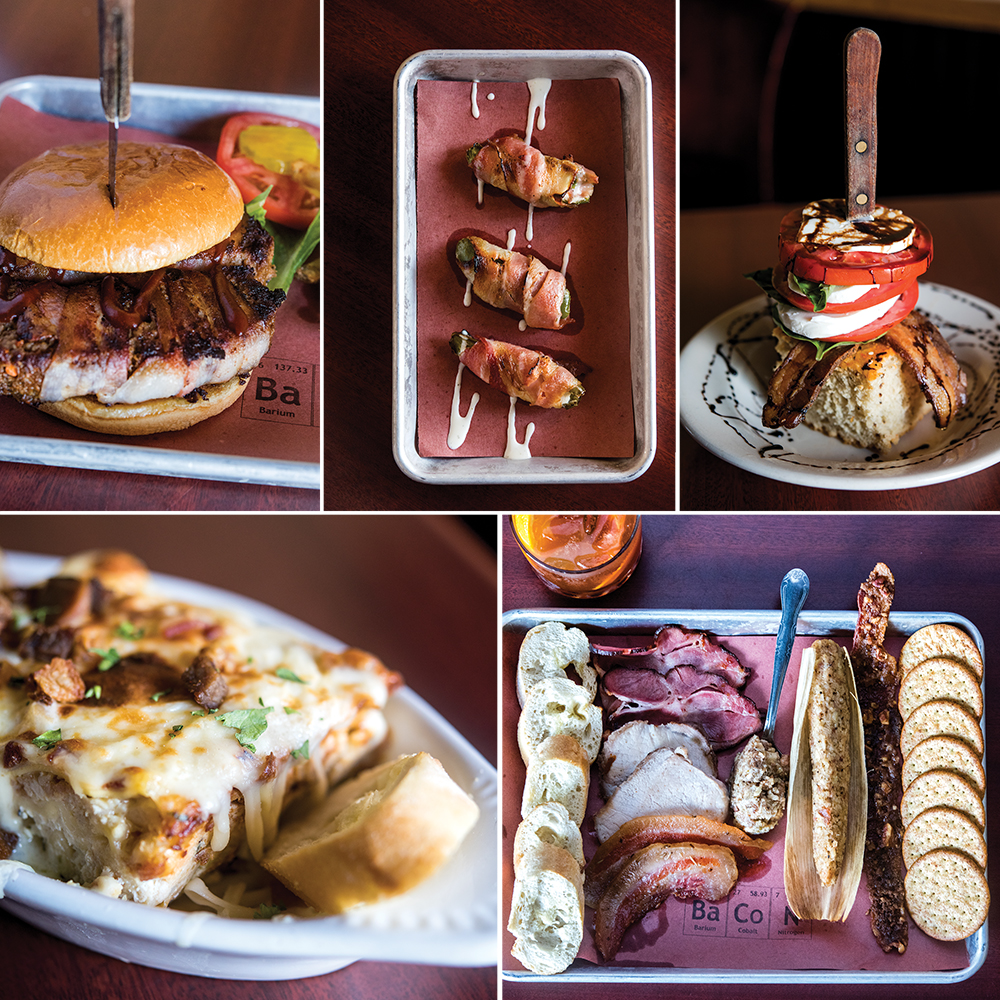 For the main course, visitors face a near-impossible choice among such options as a PBLT starring tender strips of pork belly; a sandwich whose (bacon-wrapped) meatloaf is some of the best I’ve ever had; a chicken sandwich topped with smoky Gouda and surprisingly spicy candied bacon; even a rich lasagna packed with chicken, spinach and alfredo sauce where the savory nuggets of bacon represent added complexity rather than the primary protein. There are even a couple of light, colorful salads that just happen to include a hint of bacon here and there.

The key is variety; rather than identical heaps of meat on everything, multiple textures and flavors of bacon are used in different ways, including as crumbles mixed with candied walnuts in a grilled peach half a la mode, or infusing the signature cocktails with extra jolts of flavor. Yes, you can order a Bacon Old Fashioned, and yes, it is a new source of light and joy in my life. If you only try one thing, though, the piece de resistance is the triple bacon bypass: layers of soft chocolate cake, marshmallow crème and caramel laced with cinnamon and bacon bits. It is incredibly rich, and so, so worth it – an ideal conclusion you won’t find anywhere else.

Imagination, balance, a hefty dollop of palpable enjoyment … chef Cummings has pulled off an impressive balancing act here. So have your Bacon; eat it, too.

The Other Secret Ingredient

I suspect there’s another, non-pork-based reason that Bacon works as well as it does: Chef Cummings is visibly enjoying himself. The word “fun” comes up quickly and often when he starts talking about his project, and his mischievous sense of humor was evident as he regaled us with anecdotes about people asking whether everything on the menu has the key ingredient (“You walked into a restaurant that is literally called Bacon! What did you think we served?”) or how he manages to come up with edible ideas (“Welllll,” he drawls with an air of amused innocence, “I am a chef, you know.”) And aside from the occasional baffling online complaint about the mac and cheese being “too cheesy,” his craft seems to be catching on. His grin lapsing into an actual smile of pride, he asserts, “This place has worked.” 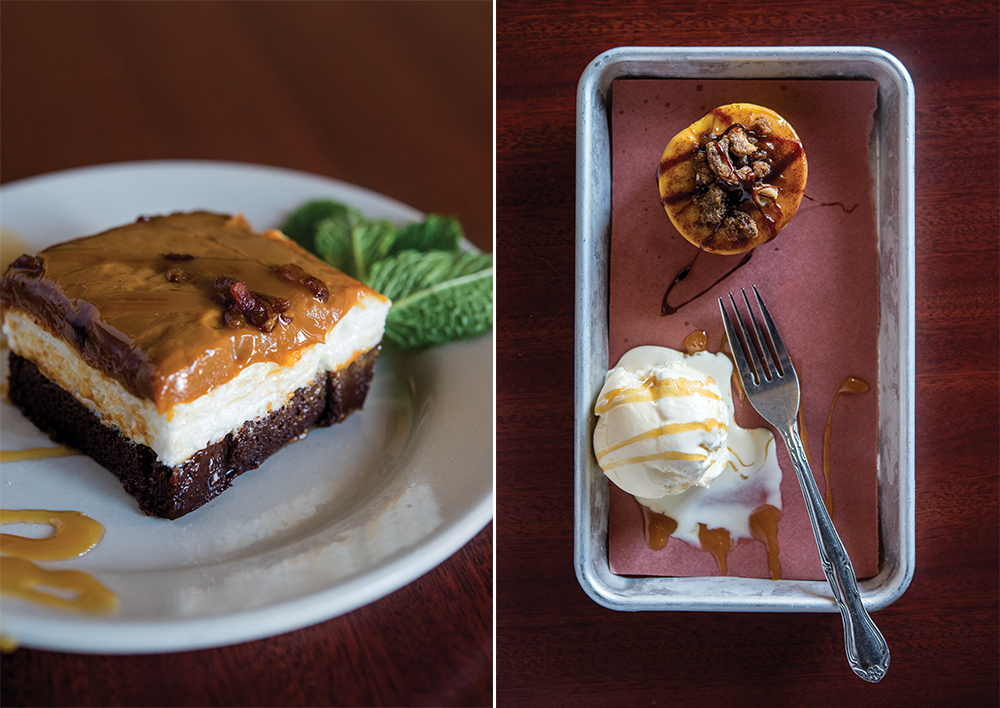