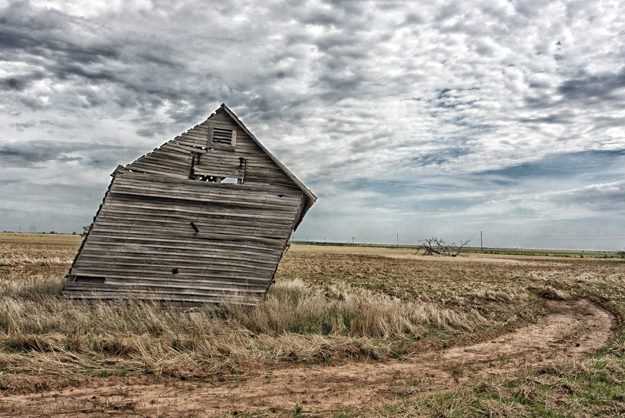 It is not so much the big things that stick. In years of covering thousands of miles and hundreds of Oklahomans, it is the little details I revisit again and again.

Things like the creaking and whirring of dozens of old-fashioned windmills, standing guard over Shattuck as night settles in. A nearly imperceptible nod from a dusty teen cowboy on a tired horse at the International Finals Youth Rodeo in Shawnee. The whiff of a smokehouse. The smell of smudge pot sage. The curve of the horizon as you head past Yukon and west on I-40. Balko’s proud line of weathered wooden buffalo, lashed to the school’s chain link fence with dates and details of hard-fought state championships. The long, knotted rope swing dancing over the Blue River, off Camping Area 5.

The abandoned farmhouse past Lone Wolf, stripped by the elements down to silver-gray planks. Its tenacious shingles ruffle and ripple in the wind, each anchored to the decaying roof by a single rusty nail, pumping up and down like keys of a ghostly pipe organ. The shed’s remaining ribs inhale and exhale with each gust, breathing in and out, a great wooden fish beached on the plains of Kiowa County.

The tight clasp from the skeletal hand of an 108-year-old, and the lock of her gaze when words fail. Choruses of katydids. Cattle auctioneers’ cadences. Hymns sung in Musogee/Creek at the gathering in Okmulgee. The roar of trucks in the mud bog at Santa Fe Trail Daze in the Panhandle. The rosary recited in Vietnamese at Our Lady’s Cathedral in Oklahoma City. The Zombie Nation chant leading up to tipoff at Thunder home games.

Together, they sing a song of Oklahoma. Not the great Broadway-built anthem that is belted out on cue, but a nuanced, sometimes discordant, ever-changing riff.

This new series of images and essays explores the people and places of Oklahoma that have stuck with me: the moving, the unexpected, the improvised, the ramshackle, the hopeful, the authentic.

The name is simple: 77 Counties.

M.J. Alexander brought two decades of work as a photographer, reporter and editor with newspapers, magazines and The Associated Press when she moved to Oklahoma in 1998. She now documents the people and places of the American West, with an emphasis on her new home state.

Her portrayals of Oklahoma and Oklahomans have inspired more than a dozen solo shows, in private galleries and venues including Brush Creek Foundation for the Arts in Wyoming, the Oklahoma City Museum of Art, the Tulsa Historical Society, Oklahoma Heritage Association and the Oklahoma State Capitol. She was the first Oklahoman featured in a solo show in the Main Gallery of the International Photography Hall of Fame, which described her as “combining the vision of an artist with the skills of a storyteller.”

Her words and images have been honored by the Society of Professional Journalists, featured on national magazine covers, and published here and abroad. She is author and illustrator of two books: Salt of the Red Earth, a collection of portraits of and interviews with 100 Oklahoma centenarians, and Portrait of a Generation: Children of Oklahoma – Sons and Daughters of the Red Earth, gold medal winner for Best Regional Non-Fiction at the Independent Publisher Book Awards and winner of a 2011 Oklahoma Book Award.

To suggest a person or place for consideration in her new 77 Counties series, contact 77counties@gmail.com.