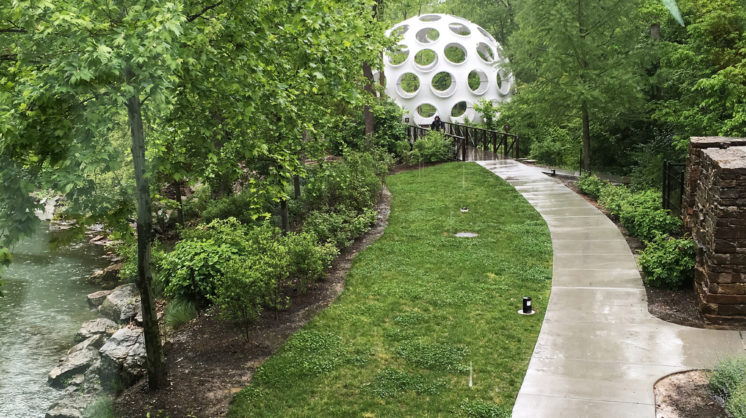 Apples probably aren’t the first thing you think about when you hear “Bentonville, Arkansas.” But back in the early 20th century, Benton County – with Bentonville as its seat – had the largest number of bearing apple trees of any county in the United States. Apples, however, are not what turned this small community into a major art and cultural destination. 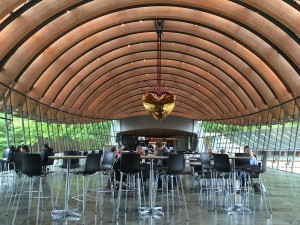 In 1951, a small-town businessman, born in Kingfisher, Oklahoma, opened Walton’s 5&10 on the square in Bentonville. The rest is truly history. His business expanded with the first Walmart in 1962. Those humble beginnings have also morphed into major cultural contributions to the area – which is why in a recent Expedia Travel Blog, Bentonville was named as the third most popular vacation destination in 2020. 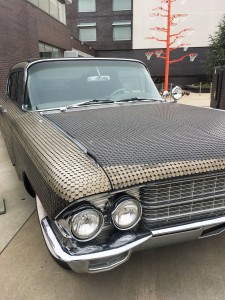 It’s an easy three-and-a-half-hour drive from Oklahoma City, so there’s no excuse to pass up what Bentonville has to offer.

At age 10, Sam Walton’s only daughter, Alice, was already an art lover. One of her first acquisitions was a Picasso print from her father’s dime store. In 2005, she founded Crystal Bridges Museum of American Art.

Architect Moshe Safdie designed a series of pavilions incorporating spring-fed ponds. The plan included galleries, meeting and classroom spaces, a library and a museum store designed by Marion Blackwell, and the 120-acre grounds include walking trails and outdoor sculptures. Crystal Bridges, the name inspired by the clear springs on the property and the bridge design of the building, opened in 2011. In 2015, a relocated and restored Frank Lloyd Wright house opened to the public on the museum’s grounds. The collections encompass five centuries of America art. A featured exhibition, Ansel Adams: In Our Time, including more than 100 of Adams’ iconic images along with works by artists who influenced him or were influenced by him, is on display through Jan. 3, 2021.

The museum’s restaurant, Eleven, serves local and sustainable High South cuisine. The soup is smoky bean and ham hock served with cornbread – mother’s milk for those of us with Ozark roots! You can also get picnic boxes to be enjoyed on the trails.

This is the perfect time to enjoy the outdoor exhibition North Forest Lights, which runs through April 4, 2021. Five distinct displays use sound and lights to turn the nighttime trails into sensory experiences. There is a charge for this exhibition and, as with the museum, special precautions and requirements for health and safety are in place; visit crystalbridges.org. 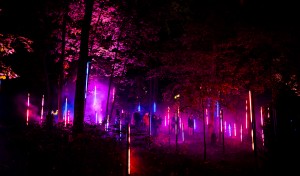 The Momentary, a satellite of Crystal Bridges, is Bentonville’s newest cultural attraction. Once a Kraft cheese factory, this massive building has been repurposed into a home for contemporary visual and performance arts, class space and event venue. The currently featured exhibition is Nick Cave: Until. Cave, described by the New York Times as “the most joyful, and critical, artist in America,” turns 24,000 square feet of gallery space in the Momentary into an eye-feasting whirl of color and materials from found objects, wind-spinners, beads and more, overhung by an amazing crystal cloud. Through it all, the artist touches on issues of gender, gun violence and racial justice. While the temptation is to revel in the celebration of the visual, visitors are challenged on a deeper level. 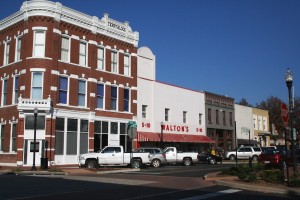 The exhibition runs through Jan. 3. Admission to both Crystal Bridges and The Momentary is free; visit themomentary.org.

David Bogle is a native-born Bentonville citizen, but also is a Cherokee with deep Oklahoma roots. He ranches in Oklahoma on land that has been in his family since the Dawes allotments. Bogle started the Museum of Native American History (MONAH) in 2006, moving it to its present location in Bentonville in 2008.

The core of the 10,000-plus-item compilation is Bogle’s own collection, supplemented with donated items and items on loan. The aggregation spans 14,000 years of information and artifacts of indigenous peoples of North and South America.

The heart of Bentonville is its charming town square, and the main attraction is the original Walton 5&10. Now a museum and visitor center with an old-fashioned ice cream shop, visitors can see historic displays including Mr. Sam’s ’79 Ford pickup. The museum is closed now, but you can stop on the sidewalk and order a sweet treat from

TASTE OF THE TOWN

For art while you eat, check out the 21c restaurant, The Hive. A giant honeycomb is a feature beside the entrance, with vines and bees winding into the restaurant – an immersive site-specific installation by artist Johnston Foster. The menu, overseen by award-winning Chef Matthew McClure, includes home-grown favorites with a sophisticated twist: for example, sorghum-roasted duck with hominy grits.

Bentonville has become a foodie mecca, always well-represented at the James Beard House.

Chef Matthew Cooper presides at The Preacher’s Son – and yes, he is. Plus, the restaurant is in a beautifully restored old church. Look for food with local roots such as rabbit and striped bass, but you’ll also find shrimp and scallops on the menu.

These three chefs love the Ozarks and local comfort foods, but don’t be fooled: Their creations can hold their own in the largest, most food-jaded market. Even the Big Apple.

Which brings me full circle. This little apple-producing area has grown in so many ways. It provides big-city surprises, without big-city inconvenience.