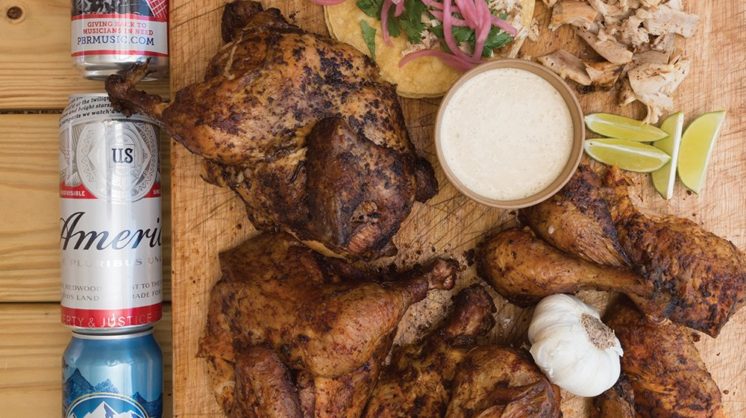 Hideaway Pizza seems an unlikely place for a pitmaster’s career to begin, but the Stillwater-based pizza joint was Brian Cole’s first restaurant job. Cole is now the pitmaster for Maples Barbecue, Todd Woodruff’s new concept in Midtown, and their relationship began with pork butt and homemade barbecue sauce.

“I grew a lot with Hideaway,” Cole says. “After five years, I left for school, and I bartended some. Eventually, I got back into food by taking a job at Whole Foods.”

Woodruff reached out to Cole about the barbecue gig. “I had a fair amount of experience smoking meat at home,” Cole explains, “and at one point in time, I took him a jar of barbecue sauce I had made after I smoked a pork butt. It just kind of clicked from there and fell into place.”

Like many of us, Cole’s exposure to food happened in his family’s kitchen. Both his parents cooked, and he remembers that often it was just to save money. Saturday mornings as a kid meant waffles or pancakes; his dad made them every weekend, as well as fresh baked bread on Sundays.

Work is now the Maples trailer, and among his other duties as the pitmaster, Cole is in charge of getting the meats smoked properly. Since his skills developed as a home cook, we asked him to give us a how-to guide on setting up a home smoker with a backyard grill.

While the most ideal setup is an offset smoker, a charcoal or gas grill can be used to smoke food in the backyard.

These have a bit more flexibility, especially depending on the shape. Basically, what you want to do is build your fire on one side of the grill, and smoke on the other. Keep in mind that when smoking, you really just need a good coal bed to start, then feed that coal bed chunks of wood to produce smoke.

To do this, ignite either chunks of wood or charcoal in a chimney starter, or in the bottom of the grill. Once the wood has burned into coal, or the charcoal has ashed over, push the bed to one side of the grill.

From there, feed wood chunks into the coal bed throughout the smoking process to keep your temperatures up. I would remove the grate from this side of the grill for access. Starting out, I just used charcoal to start the fire and reserved the wood for the actual smoking; either way is acceptable.

For wood, Cole recommends post oak: “The flavor is nice and mellow, not overly smoky.”

There are all kinds of options, though, and some work well with different cuts and foods. Cole said to definitely avoid green wood, or wood that is fresh. “The smoke tastes off. For weekend warriors, bags of wood chunks and split logs are available at grocery and hardware stores. I’ve had good results with these.”

Another surprising source: Craigslist. “Just search for ‘well-seasoned wood,’” Cole says. We’re not sure how to feel about this advice, but he’s the pitmaster.

You can produce smoked meats from a gas grill, but you’re a bit more limited, because you’ll have to buy wood chips, not chunks for a gas grill. (Chunks are fist-sized; chips are just that – chip-sized.) Some companies sell small metal boxes to put the wood chips in, which are nice if you’re going to be doing this often, and you should be able to find them at a hardware store. However, you can also get the same results with foil.

Basically, you’re going to build a foil packet to put wood chips in. Take an 18-inch-long piece of foil and fold it in half, then fold the top and bottom inch in two times to create a pocket. Throw wood chips into the pocket and fold the top down. You should have a little packet of wood in foil.

Place this flat on the grill, and then pierce the top half a few times so smoke can escape.

Turn on the burner on the packet side to medium-high heat. This should quickly produce smoke. You will have to make a few packets, as these will burn out quickly.

On a gas grill, I wouldn’t suggest larger pieces of meat like brisket or pork butt. Things like chicken, pork chops and smaller cuts of meat should be great in this scenario.

“Okay,” declares Cole, “I know there is debate about beer can chicken – if it works, or if the beer does anything or not. I don't care about debates, I've made it multiple times and it’s worked great. The theory is [that] you open a can of beer, and 'stand' the chicken over it by inserting the can into the open cavity. This arrangement then stands upright on the grill, and the grill simmers the beer, cooking the chicken with the steam from the beer from the inside, while the grill does the work on the outside: crisping skin and getting great color.” 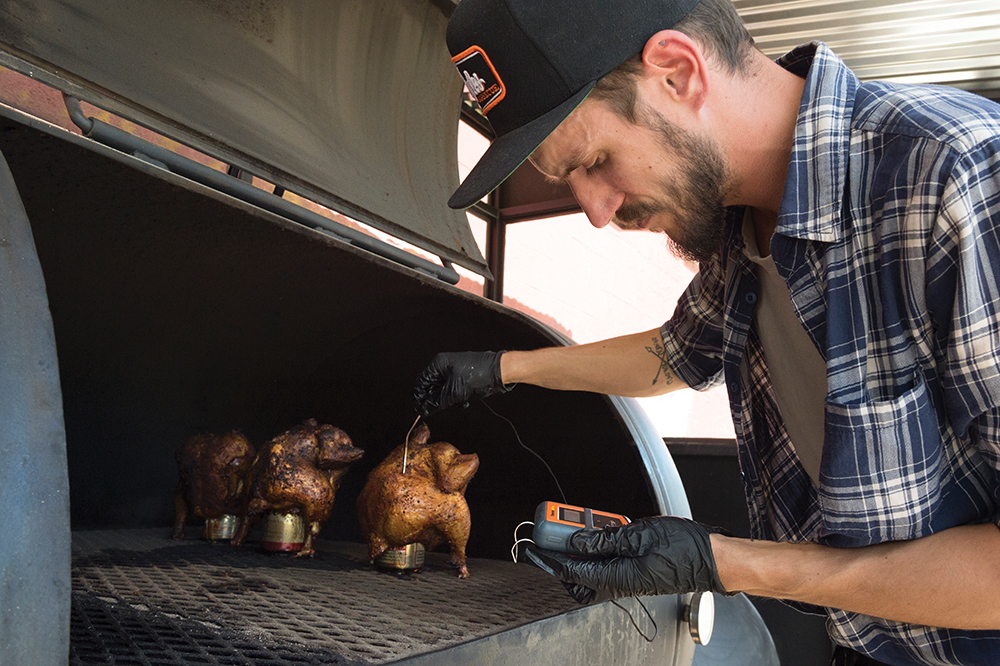 •  Take chicken and remove neck and giblets, dry inside and out with paper towels.

•  Lightly rub chicken inside and out with olive oil, to help the rub stick.

•  Rub chicken liberally with dry rub, inside and out.

•  Open beer and take a few swigs – you want it a little more than half full. Dash some Tabasco and throw two crushed garlic cloves into the can.

•  Place chicken on top of the can, so the drumsticks are facing downward and the can is going into the cavity of the bird. The drumsticks can be used to help prop the bird up.

•  Place bird over partially direct heat and cook for 1 hr 15 minutes. Check the temperature of the breast and thigh; it should read 165 degrees before it’s finished.

•  Whisk all ingredients together and chill for at least an hour to let the flavors meld.

•  “White barbecue sauce may seem weird,” Cole admits, “but it’s huge in Alabama, and goes great with the chicken.”

Change the chicken rub to Tajin, a chili lime mexican seasoning, change the beer to a Corona or Modelo and shred the bird after grilling for crazy good tacos.