As night falls on OKC, near the Broadway Extension’s 10th Street exit, a neon sign that reads “Jesus Saves” glows above an old warehouse. While the neon sign is new, placed over a hand-painted version of the same message, the sentiment is not: For many years, this was the Duncan bible bindery. Now, though, this once-abandoned building has been converted into one of the city’s premier living spaces.

“The building was in disrepair when we began,” explains owner Tarena Self, a local real estate investor and hairdresser. “We took the building right down to the four outer walls before we could get the vision to work. The designers and I thought it important to pay homage to the history of the house with the amped up neon version of the sign facing 10th, as well as a light fixture above the staircase that appears as a cross from any angle.”

This one-bedroom home is ultra-modern with an open floor plan and contemporary accents – it even features a Murphy bed in the living room. Downstairs is an Airbnb, and the whole space is available to rent for events. Although the interior is impressive, the soul of the property is its patios. There are two: one off the bedroom offering vistas of the Capitol and Buick sign, and the other offering a view of the entire expanse of the downtown OKC skyline. The result is one of a kind, but it’s far from the only local building or business that’s been converted into a spectacular living space.

Route 66 and the Neon Garden

Along the famed Route 66, just outside Arcadia, is a home like no other that pays tribute to the road’s colorful nostalgia. “I designed and built my house in 1997, modeling part of the front after a vintage 1930 Phillips 66 gas station that still exists on the route in Chandler,” says owner Jim Ross.

Ross’ home, which is lit by neon and accented by antique gas pumps, makes a frequent photo opportunity for visitors cruising up the historic highway. And while the gas station façade sparks curiosity, its backyard is where the home truly glows: That’s where you’ll find nine thoughtfully arranged vintage neon signs, some antique and others replicas, arrayed like a neon garden. The visual is centered on a small cabin Ross built by hand, which also is designed to look like an old-fashioned gas station. 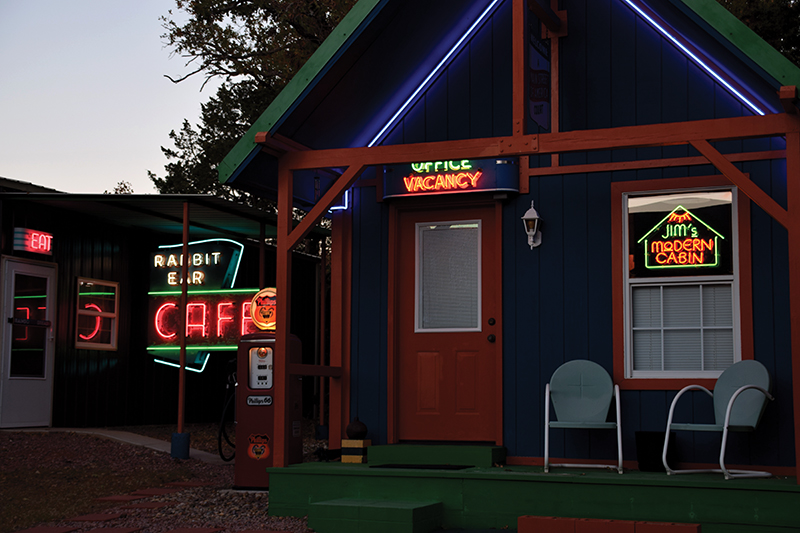 In North Edmond, nestled between small housing editions and horse farms, is a runway. Not one of the Will Rogers variety; rather grassier in nature, where small prop planes take off daily. And just off that runway, in what was once an old 1930s barnstorming airplane hangar, is now the eccentric home of Kim and Ron Van Der Wol.

The Van Der Wols bought the old hangar in 2003. At the time, it had no water, no plumbing, no heat, no bathroom and a single outlet for electricity – but in what most saw as an abandoned relic of rural aviation, Ron and Kim saw their future. They hammered, drilled, sanded and sawed by hand, ultimately transforming the hangar into an open and energetic two-bedroom home with high ceilings and an incorporated dining room, living room and kitchen brimming with natural light.

“We took something that nobody wanted and turned it into a pretty amazing home,” says Kim.

This Village residence with stunning views of Lake Hefner was built in 1984 by five-time Village Mayor Roy Carmack, and actually began as the beautiful “Our Lady of Guadalupe” Chapel. When the chapel’s congregation grew too big in 1990, the Carmacks added a kitchen and garage, turning it into a beautiful, Santa Fe-style stucco home. Purchased in 2013 by Nicole and Matt Hughes, the house holds true to its spiritual background, a reflection of the devout faith of the owners.

“There’s a beautiful stained glass window in the front of the house that would have been above the altar,” says Nicole. “That window is a replica of St. Peter’s Basilica in Rome. It features a beautiful white dove, symbolic of the Holy Spirit. On the third level – in the master bedroom now – you’ll find the ‘Prayer Tower.’ It’s the tallest part of the house and once served as a place for folks to pray surrounded by windows, looking toward the east.”

In addition to the huge windows, beautiful skylights flood the house with natural light, and there is no place more stunning to watch a sunset than from the patio, which sits on a pond that takes up most of the backyard.