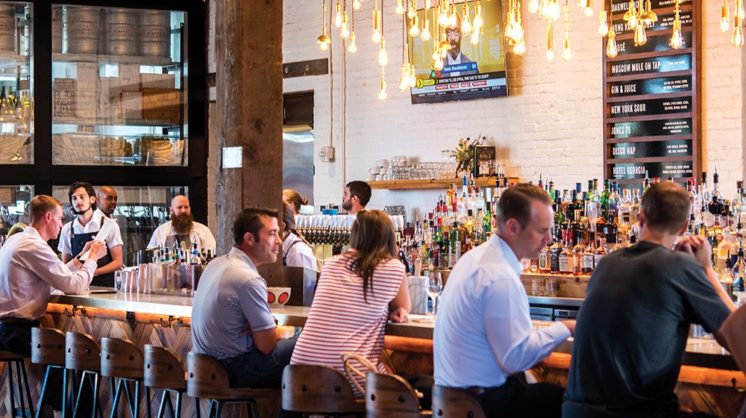 What do you get when you combine a restaurant, bar, private space for intimate events and top-tier concert hall in one historic venue? OKC is finding out, as the massive new Jones Assembly is making waves on Film Row at 901 W Sheridan.

I still can’t get over the size of this place. The first thing I asked while we were setting up for the photo shoot was whether the staff has a semaphore code or other signaling system for communicating between the host stand at the entrance and the main dining area on the other side of the ample bar – a distance of at least 30 paces, and my legs are pretty long. (The question got a laugh the first time, but I asked a different staffer as we were leaving, and she admitted that their secret is technology, in the form of iPads.)

The space would be positively cavernous if not for the design touches that give it warmth and life and make it feel merely very large instead. That means lots of wood paneling to offset the exposed brick of the former assembly plant’s walls, royal blue upholstery to echo the velvet curtain up on the stage that fills the north wall (more on that later), gleaming brass light fixtures and freestanding lamps, even a few potted trees here and there – they’ve got room.

Upstairs, there’s a second, smaller bar, with a nice variety of seating options from low-backed, tufted leather barstools to a comfy couch that faces the impressively ample selection of vinyl LPs – complete with turntable. There’s also a perfectly appointed non-smoking covered seating area outside overlooking Sheridan, and a few deep, cozy semicircular booths that look to seat about five, positioned to give a VIP view of the stage below. Again, more on that later.

And if that weren’t enough space, there’s an entire extra dimension added via the great outdoors: The enormous exterior seating area is surrounded by walls but open to the sky, and features cornhole boards, shady enclaves and wood-burning fireplaces, so whatever Oklahoma’s notoriously fickle weather has in store, it should be comfortably worth a visit. 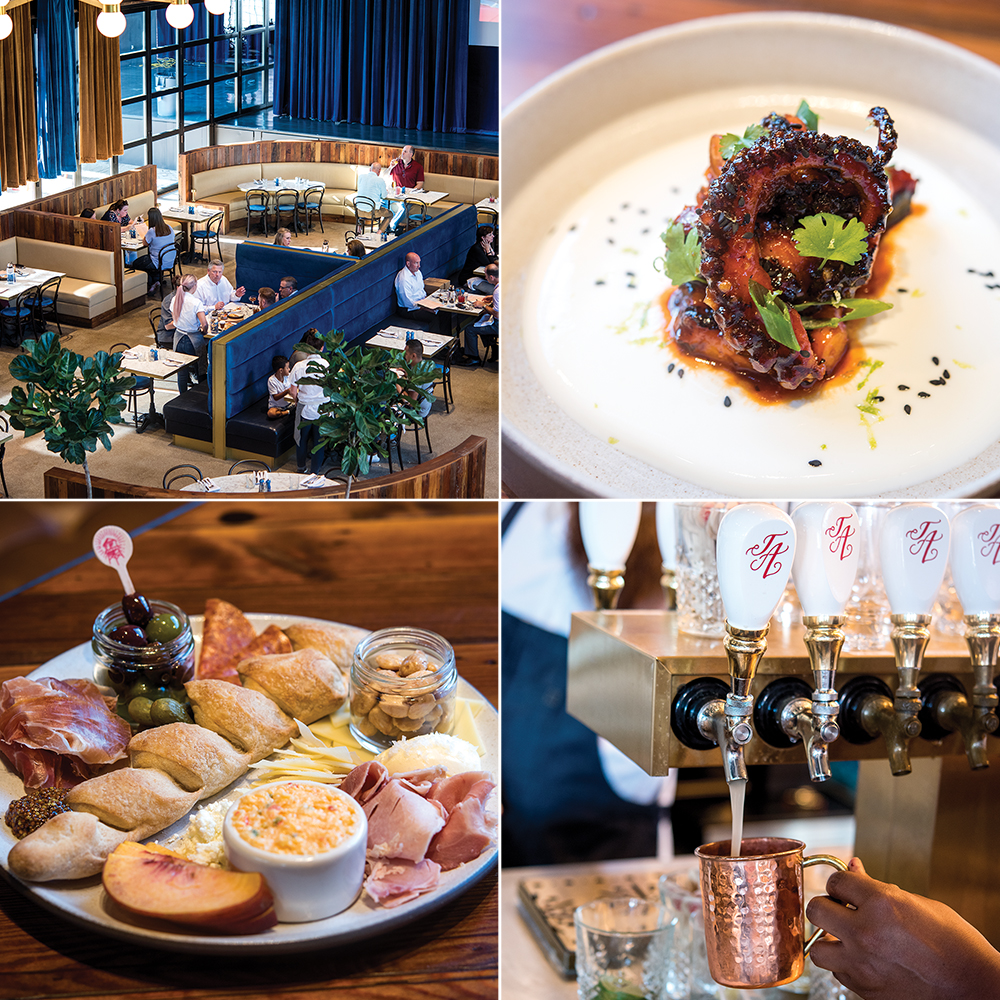 The downstairs bar is crowded, nearly full, before 4:30 p.m. on a Tuesday – the main restaurant area doesn’t begin seating until 5 p.m., but in the afternoon hours, the bar features a special “Brakes and Fluids” menu filled with snacks and coffee-based beverages. Of course, some of these patrons could simply be eager to get at the full dinner menu as soon as possible.

For an appetizer, my first and strongest recommendation is the octopus (see p. 53), but the soft, creamy burrata with blood orange slices makes a delicately flavored accompaniment to practically anything on the menu, and I admire the breadth of the charcuterie platter. This is not a heap of meat accompanied by a side of different meat – not that there’s anything wrong with that – but prosciutto and pepperoni and Schwab ham, as well as olives and salted almonds and homemade bread and slices of local peaches and pimento spread … a nicely wide variety of tastes and textures.

Like the hamburger buns and breads, the pizza crusts are made in-house, and the Neapolitan-style results are definitely worth trying, especially with toppings such as the fennel sausage, or the G.O.A.T. (these kids today and their acronyms) and its goat cheese from the exceptional Lovera’s in Krebs, red onion, crushed pistachios (yes, really) and a dab of local honey. A curious combination to be sure, and one that takes a moment to adjust to texturally – but quite delicious.

The house burger, with Tilamook cheddar and crispy shallots, is perfectly serviceable, but I’d steer you more toward the perfectly cooked scallops – with charred Brussels sprouts on a streak of pureed cauliflower – or the simple pleasure of a gorgeous piece of hanger steak from Creekstone Farms presented as Steak Frites. And definitely close out with a dessert along the lines of the B-A-N-A-N-A-S’ big bowl of tastiness: banana ice cream, toasted marshmallows, candied pecans, a house-made cookie and a sweep of banana pudding around the perimeter, to be combined in whatever proportion you like.

Chef Brittany Sanger has done some really nice work with the menu, and the Social Order management team has made a marvel out of this old space. Dinner? Yes. Cocktails as a group? Most definitely – try the cinnamon-spiked mint julep, blackberry/tequila Disco Nap or the creamy rum, citrus and avocado concoction they call the Hong Kong Phooey. A cozy spot to sip a latte in the afternoon sun? You’ve come to the right place. The Jones Assembly has put together a new downtown landmark. 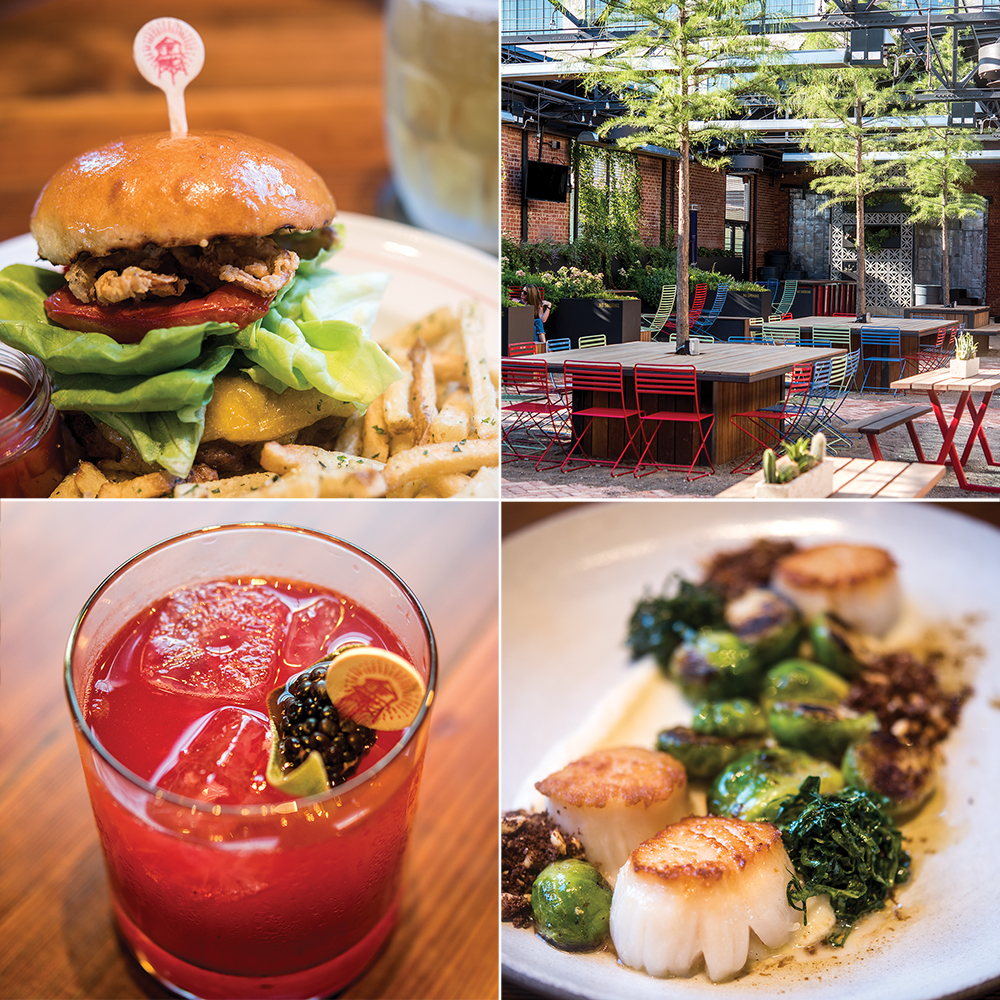 So I mentioned the stage earlier in passing, but I need to emphasize that it’s not decorative. The Jones Assembly is doing its part to add to the metro’s burgeoning music scene, tempting listeners in to enjoy acts from across the country. In the coming days, they’re set to play host to Cut Copy Oct. 5, St. Paul and the Broken Bones Oct. 13, Third Eye Blind on Halloween and the inimitable Matisyahu on All Saints Day. Visit thejonesassembly.com for details and tickets.

► The Jones Assembly is a big, big venue – so much so that we thought a few extra images might help give you a more complete picture. See below for an extra visual helping.