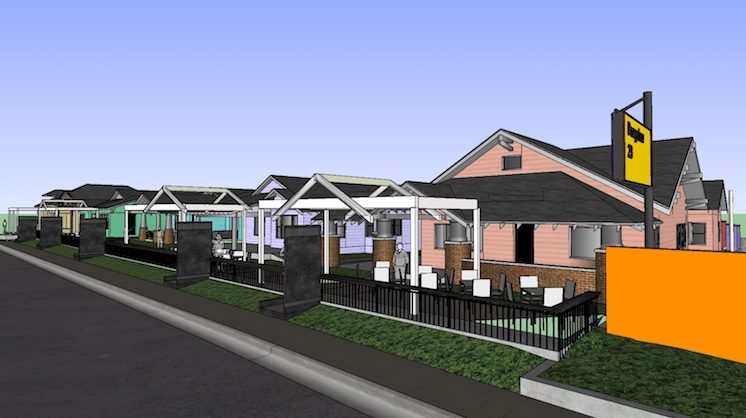 The stretch of NW 23rd between Lee and Shartel is about to get a makeover. The bungalows on the north side of the street are being repurposed by Chick N Beer owner Truong Le and his partners Vincent Le, Ty Hamilton and Lincoln Clay. The new food, beverage and entertainment complex will operate under the Bungalow 23 umbrella but will contain multiple concepts.

“We’re rolling it out in three phases,” Truong Le said. “We hope to have the first three concepts done by St. Patrick’s Day week.”

The first major change will be the relocation of Chick N Beer to the old Guernsey Park location on the north edge of the complex. Le said there will be decor changes to the Guernsey building, and the new Chick N Beer will have a focus on live music as well.

“We’re planning country and rock emphasis,” Le said. “But phase three will also include a live music component in the form of an outdoor stage. That’ll be on the west edge now that Guernsey Ave. is officially closed off between 23rd and 24th.”

The other two projects in phase one are a pizza-by-the-slice concept tentatively called Uptown Slice, and a hot dog/sausage Irish-style pub in the old Cuppies & Joe building with a name that is still being refined. The pizza spot is behind the current Chick N Beer. Le said it’s an old smoker that he’ll convert into a walk-up pizza joint.

Phase two is tentatively scheduled to open Cinco de Mayo and will include a Mexican food restaurant with a strong agave spirits program. Le said the goal is to “make it as authentic as possible.” An arcade bar called 4Play will occupy the westernmost building — formerly a tattoo parlor — and Le said he’s going for a nostalgic vibe with pinball and old school arcade games. The third component in the phase will be a ’90s hip-hop-themed bar.

The final phase will be the outdoor stage, and Le said the goal is to open it in conjunction with Open Streets, if that happens in 2023. If not, he said July 4 weekend is the target date. The final project is a one-room karaoke bar.

“We’ll have to shut down outdoor live music at 10 p.m. because we have a residential neighborhood right next door,” Le said. “The family who owns the Miriwa building are about to demolish it, and we have their permission to use the space as a parking lot for now, which should help with parking issues for a complex this size.”

As of now, work has begun on the interiors of the other bungalows besides Chick N Beer, mainly consisting of stripping the interiors to prepare for build out.